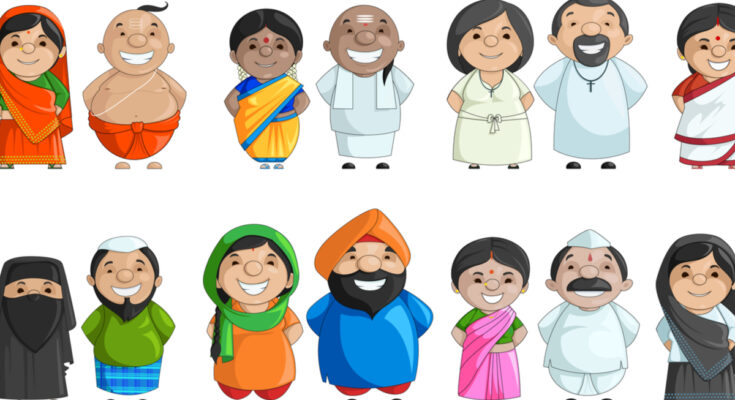 Be it ‘Kanaada’, ‘Amreeka’ or Bharat, a desi is a desi is a desi! The garb changes, the accent changes as does the lifestyle but what remains an irrevocable characteristic is our herd mentality. We thrive amongst our kind and although most of the homo sapiens species seek out their own, we take this urge to a whole new degree. The hierarchy is scaled from continent to region to state to ancestral homestead. Indulge me on this journey where clannism takes a front row seat.

The first desi settlers in Canada dubbed ‘Kanaada’ by North Indians namely Sikhs and Punjabis emphasizing vowels, were brought here to cultivate the peanut farms. They did this with resilience and before long they owned the fields and gave the natives an abundance of protein, butter chicken and bhangra. The tribe continued to evolve and their racially mixed  third generation with light eyes and skin still sport names like Harpreet, Kulwinder and Bobby. (The latter seems to be universally accepted as a Punjabi name, just go to any town Haryana or Chandigarh and you will find a Bobby). They revel in familial gatherings around tandoors and a common occurrence is the nostalgic chatter across fences on several streets that house  ‘KanaadIndians’.

To its great benefit USA got the West Indians (not to be confused with the Caribbean Islanders) hailing from the green lands of Gujarat. They brought a pioneering spirit overreaching that of the sea-faring Mayfair pilgrims of the forked tongue. Multiple generations have managed to monopolize the hospitality industry, acquisition of farmland and have given their host country fields of betel leaf while simultaneously ticking off the D cartels. Their visibility is apparent on national holidays during which you cannot escape the aroma of khichdi at a park on a bar-b-cue pit and the sound of dhol drowning the salsa beat of the Latino emigres. American desis do not believe in homogenizing with the existing mass but delight in exhibiting a rather loud presence, in little boroughs that are predominantly ‘Amreekan’.

Then we have the ultimate young desi of urban Bharat who persists in morphing the Western way of life. However, this falters between a fashionista sense of torn jeans, bare shoulders and a contrived accent. When you peel the layers, voila! you find their comfort zone which lies in a penchant for khou galli, the pav-wada haven, remorsing the earlier loss of a few thousands on Spaghetti Arrabbiata at the Taj.  Not to forget, their happy quotient whilst traveling abroad and chance meetings with a Shilpa or Kartik at discos belting out Eastern fusion music. These travelling desis are usually found in groups no less than eight whose chatter is a mix of ‘Hindinglish’.

Thus we chart the course, seemingly oblivious that we are probably not the greatest, nor are we the landed gentry that most of the world wishes to emulate.  Yet, our confidence in our cultural heritage steeped within our souls enforces us to charge forth flaunting our flamboyance. Never forgetting, that we spiced up the west and forever corrupted their bland palettes, taught them  bright colors were indeed an improvement on grays and blues and that our ways, however annoying, vigorously message them a lifestyle bereft of a lonely existence.