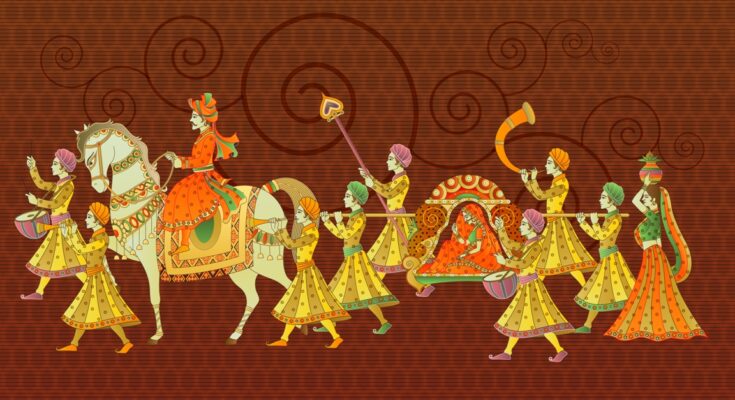 In Hindi films, wedding songs have become a sub-genre of their own. We list 10 diverse wedding tunes as a sequence in the actual ceremony (like your customised wedding playlist!)

In Hindi films, wedding songs have become a sub-genre of their own. While directors like Raj Kapoor, Yash Chopra and Sooraj Barjatya used them on a lavish scale, others focused on specific moments like pre-wedding rituals and bidaai. Besides these, one also hears records of shehnai legend Ustad Bismillah Khan, flautist Pandit Hariprasad Chaurasia and santoor maestro Pandit Shivkumar Sharma at wedding functions.

With many weddings taking place this time of the year, we choose 10 songs that are played often at such ceremonies. Instead of the chronological order we normally take, we list these tunes as a sequence in the actual ceremony.

Thus we begin with the time the marriage is fixed and go on to the emotions of relatives and friends till we have the ceremonies to the part in which the girl leaves home, and end with a feel-good number. We use songs released till the late 1990s.

Filmed on Sanjeev Kumar and Nutan, this was a huge hit for Mohammed Rafi. Music was by Laxmikant-Pyarelal, and Anand Bakshi wrote, “Shaadi ke liye razamand kar li, maine ek ladki pasand kar li”. It talks of a man bringing up the idea of marriage.

Written by Indeevar and composed by Kalyanji-Anandji, this song became a favourite for those whose sisters were getting married. Kishore sang the lines, “Meri pyaari behaniya banegi dulhaniya, sajke aayenge dulhe raaja, bhaiyya raja bajaayaga baaja”. It was filmed on Rajesh Khanna.

While shehnai records are played in many marriage ceremonies, this was one of the few wedding songs which actually featured the instrument prominently. Picturised on Johnny Walker, it was sung by Rafi with music by Ravi and lyrics by Shakeel Badayuni. Interestingly, the film’s title song sung by Rafi is also played at weddings to depict romance.

The song was inspired by the ritual of hiding the groom’s shoes during the ceremony. Lata was accompanied by S.P. Balasubramaniam in this tune composed by Raam-Laxman and written by Ravinder Rawal. Madhuri Dixit and Salman Khan are part of the well-choreographed group dance.

There are obviously many other songs one hears at marriage functions, including ‘Shaayad Meri Shaadi Ka Khayal’, ‘Teri Rab Ne Bana Di Jodi’ and ‘Yeh Galiyan Yeh Chaubara’, besides numerous songs released in the new millennium. But since we went by a specific theme and order, we preferred the ones above. As we said, marriage songs are a sub-genre of their own.