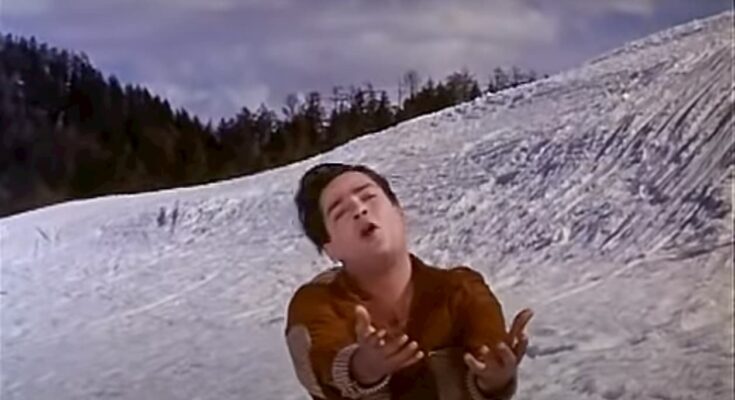 Filmmakers and cinematographers have always loved the snow. And there was a time when Kashmir was one of the favourite locations, before the problems started. Another attraction was Himachal Pradesh, in spots around Simla and Kufri. Later, some even went to Switzerland and other European destinations.

With snow a regular feature in some northern parts of India at this time of the year, we choose 10 songs filmed in such areas. Though there were some good tunes in the 1990s (in Maachis, Gupt and Pukar), our list is taken from the 1960s and 1970s. There are some real gems here.

Besides the famous ‘Yahoo’ scream, this song was remembered for its outdoor locales, with Shammi Kapoor jumping around in the snow trying to woo Saira Banu. The Mohammed Rafi hit was composed by Shankar-Jaikishen, whose antara was inspired by Farid El Atrache’s Arabic song ‘Wayak Wayak’. Lyrics were by Shailendra. In an interview, Shammi had said that the word ‘Yahoo’ was sung by Prayag Raj.

Picturised on Raj Kapoor and Vyjayanthimala, this peppy tune was sung by Vivian Lobo. Music was by Shankar-Jaikishen, with the lines, “Ich bin leibe, I love you”. The tune later inspired ‘Sun Sahiba Sun’ in Ram Teri Ganga Maili.

Rajesh Khanna’s phase of superstardom began in 1969, and this was one of the hit songs from this successful film. Also featuring Sharmila Tagore, the snow portion came a bit later in the song. Music was by S.D. Burman, with Anand Bakshi writing, “Gunguna rahe hain bhanware, khil rahi hai kali kali, gali gali, kali kali”.

Written by Sahir Ludhianvi, it had the lines, “Tera mujhe hai pehle ka naata koi, yoon hi nahin dil lubhata koi”. Music was by R.D. Burman. There were two versions of the song, and the snow one was sung by Kishore Kumar and picturised on Shashi Kapoor and Sharmila Tagore. Sushma Shrestha joined Kishore in the other version, set in a party scene.