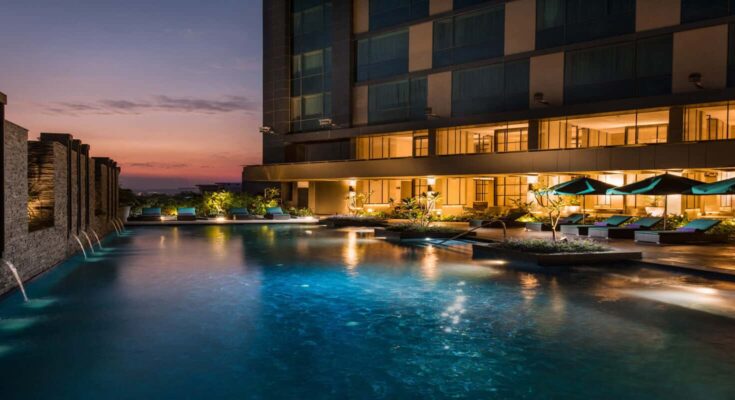 It seems that Conrad has become a wedding hotel, and not good for the business traveller. Service standards at weddings are low and there is a chalta hai attitude, writes Vickram Sethi

The lobby of the Conard hotel in Pune has the space of an aircraft hangar. Marble, chrome, carpet and all the glitz of poshness.

We checked in around 8pm, the lady at the reception desk mentioned that all the restaurants were full and that we would be better off eating in the room. I marod a chakkar and found the Japanese restaurant had a few empty tables; however, we chose to order in-room dining.

Here is how the meal began.

We had ordered two soups; a Tomato Basil Soup that had a very synthetic taste. The soup was accompanied by a tiny little biscotti more like a rusk. There was no bread basket!

The second soup that we ordered was a Sweet Corn Chicken Soup. Every highway dhaba would know that the accompaniments are a chilli sauce, a soya sauce and chillies in vinegar. I asked the waiter about the sauces and he was quite lost. “I’ll just get it,”’ he said, and he came back with the rest of the meal, by which time I had finished my soup. Even after that there was no chilli sauce – just soya sauce, and chillies in vinegar.

We ordered two salads: A Buratta And Tomato Salad and a Caesar Salad both were good.

The Mutton Biryani followed. The meat in the biryani was tender, and it arrived piping hot. They also served a tiny portion of raita, virtually two teaspoons.

I complained about the water to the reception and the lady probably knew of this problem and she didn’t seem surprised at all. It seemed the boiler for the basin and the tub was switched off. I checked with a friend who was staying in the hotel he had a similar no- hot – water – in – the -basin, experience.

The Mini Bar was empty, and a little placard said that the key to the mini bar was with the reception. Often at weddings, the host instructs the hotel to empty out the minibar.

We went down to the Coriander Café for breakfast. It was a good spread. I asked for an egg white omelette and was served a fried egg without the yolk. I ordered a Masala Dosa, it was served perfectly plated and hot. However, the Idli had an after-taste. The chutneys were not fresh. There was a Sabudana Khichdi that seemed yesterday’s. The Palak Pakodas though were fresh and so were the Medu Wadas.

The service standards were pathetically poor. The waiter brought us an orange juice glass in his hand, and not in a tray. Similarly, tea and coffee were not served in a tray, and we had to remind the waiter that we needed sugar and spoons with our tea and coffee.

I ordered toast that came wrapped in a tiny bit of paper in a stainless-steel basket and the waiter plonked two sachets of butter on the table!

The story at lunch was the same. We ordered Kali Dal, a paneer dish, and two soups. The concept of serving a small rusk instead of the bread basket seemed a cost-cutting measure. Again, the sweet corn chicken soup came without the sauces. With the dal and paneer, we ordered two lachha parathas and told the waiter to get them one at a time. The waiter got both the parathas together when I told him that we wanted one at a time, he took the second paratha and left it on the cutlery counter, I explained the idea of getting one by one was that we wanted to eat a hot paratha. He then went into the kitchen and ordered for another paratha. In the meantime, our food got cold and we lost interest in the meal.

All over the hotel, there are posters that mention weddings at Conrad are really special.

It seems that Conrad has become a wedding hotel, and not good for the business traveller. Service standards at weddings are low and there is a chalta hai attitude. People complain and nobody takes the complaints seriously and the service standards are appalling.