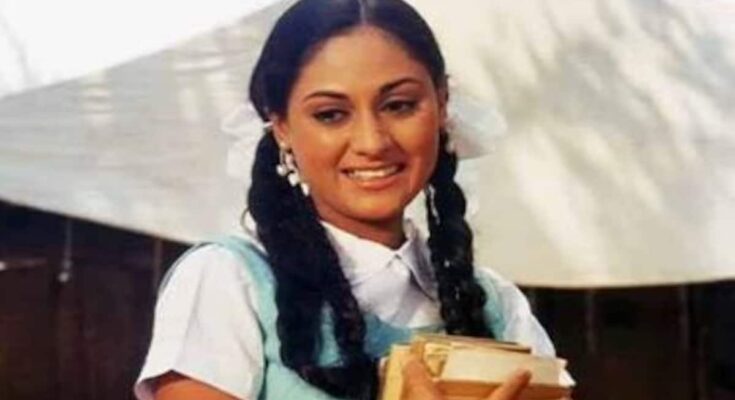 In the first half of the 1970s, Jaya Bachchan, nee Bhaduri, had some landmark films. Most of them had great songs, which made it to radio shows and listener playlists even today.

In the first half of the 1970s, Jaya Bachchan, nee Bhaduri, had some landmark films. Most of them had great songs, which made it to radio shows and listener playlists even today.

To mark her 73rd birthday on April 9, we choose 10 songs from 1971 to 1975. Interestingly, seven of these were sung by Lata Mangeshkar. The list is chronological.

A prime example of R.D. Burman’s innovative arrangements, this huge hit was sung by Kishore Kumar and Asha Bhosle. Anand Bakshi wrote the words, and Randhir Kapoor and Jaya were picturised in outdoor locales. The individual voices, changes in pitch and harmonies of the two singers were exemplary.

Though this song featured only a male voice, with Kishore being in great form, Anil Dhawan and Jaya shared equal screen space. Laxmikant-Pyarelal provided the music and Bakshi wrote the words. The title song, sung by Lata, also featured Jaya in a remarkable performance.

This was based on a ghazal written by Mir Taqi Mir, with Majrooh Sultanpuri writing the antaras, and this being credited. The opening lines were, “Patta patta boota boota, haal hamara jaane hai, jaane na jaane gul hi na jaane, baagh toh saara jaane hai”. Mohammed Rafi and Lata sang the song filmed on Jaya and Amitabh Bachchan in a garden, with Laxmikant-Pyarelal composing the music.

Though the film was more known for the Kishore hit ‘Meri Bheegi Bheegi Si’, this Lata gem had its own following. “Baahon mein chale aao, hum se sanam kya parda”, wrote Sultanpuri, as R.D. Burman composed the tune. The song was filmed on Sanjeev Kumar and Jaya.

With music by S.D. Burman, Abhimaan had many great songs filmed on Jaya, including ‘Nadiya Kinare’, ‘Ab Toh Hai Tumse’ and ‘Piya Bina’. But the climax duet ‘Tere Mere Milan’ by Lata and Kishore has remained an all-time favourite as she and Amitabh came back together in a stage performance. Majrooh Sultanpuri was in his element here.

Jaya was paired opposite Vijay Anand in this film, which had some wonderful songs by Kalyanji-Anandji. While Kishore’s title track was also filmed on her, there was ‘Mere Padhne Mein Nahin Laage Dil Kyon’ by Lata. There was another Lata beauty ‘Roothe Roothe Piya Manaaoon Kaise’, where Jaya acted naturally. The songs were written by M.G. Hashmat.

After her marriage to Amitabh, Jaya stopped work for a while but had a much talked-about role in Silsila. She made a comeback in the late 1990s, and one of the hit songs filmed on her was the Kabhi Khushi Kabhie Gham title track in 2001. Of course, when it comes to music, Abhimaan has been her best.