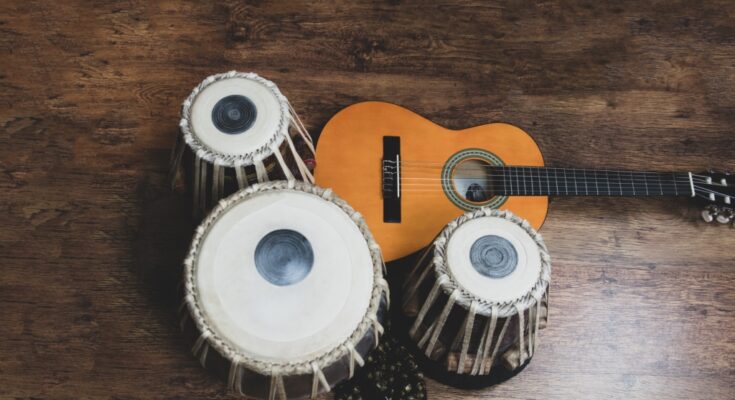 On June 21 every year, Fete de la Musique is celebrated across the world, and as per the tradition, musicians come out on the streets to perform. Since the last two years have hardly seen any live performances, the action has shifted to online platforms.

First celebrated in Paris in 1982, the day is also called World Music Day, though it has no connection with the genre of ‘World Music’ as one knows it. But to mark the occasion, we chose 10 appropriate tunes that blend Indian and western sounds.

While some of these are collaborations between Indian and international artistes, others blend Indian and western styles. They would be categorised as fusion or crossover music. We cover a span from the mid-1960s to the current day, in chronological order

The opening track of West Meets East, the 1967 collaboration album between sitar maestro Pandit Ravi Shankar and western classical violinist Yehudi Menuhin, was composed by Shankar. Based on raag Gunkali, it featured Ustad Allarakha on tabla. The album was released at a time there was an increasing interest in Indian music in the West.

Ravi Shankar’s nephew Ananda Shankar, who played sitar, was a pioneering figure in fusing popular western tunes with Indian arrangements. Besides Indianised versions of the Doors’ ‘Light My Fire’ and the Rolling Stones’ ‘Jumping Jackflash’, he was known for the beautiful and melodious ‘Snow Flower’.

Sangam was a group led by ace keyboardist Louiz Banks and featured vocalist Ramamani, saxophonist Braz Gonsalves and others. The album City Life was successful and Prayanam had some excellent vocals. The group did some well-received shows abroad, and Banks later on did some great work in the Indo-fusion space.

Two ace violinists, L Subramaniam from India and French-Italian great Stephane Grappelli, collaborated on the hugely successful album Conversations. The title track, called ‘Conversation’, featured guitarist Jorge Strunz and keyboardist Joe Sample, and became one of the most popular Indo-fusion tunes. The album had other gems like ‘Don’t Leave Me’ and ‘Paganini Caprice 5’.

Ry Cooder played guitar and Bhatt played Mohan Veena, the adapted Indian slide guitar, on the 10-minute title track of the album A Meeting ByThe River. It began with a slower alaap and picked up tempo after a while. The album, which had four tunes, won the 1994 Grammy Award in the World Music category.

Mumbai drummer Trilok Gurtu settled down in Germany, and became a world-renowned percussionist. After playing with the John McLaughlin Trio, he did a series of World Music albums. African Fantasy explored African sounds and the title track featured the fabulous Angelique Kidjo from Benin.

Half sisters Anoushka Shankar and Norah Jones have established themselves in different genres, as sitar player and singer, respectively. On this song, they paid tribute to their father, sitar maestro Pandit Ravi Shankar. Joined on tabla by Tanmoy Bose, they blended smooth sitar passages with melodic vocals

Joe Walsh, guitarist of rock band Eagles, and sarod maestro Ustad Amjad Ali Khan recently released the three-track EP Prayers to pay tribute to doctors and frontline workers. They concluded with an instrumental version of ‘We Shall Overcome’, popularised by Pete Seeger in the 1960s. While that became a civil rights anthem, this version reflects the mood of the current Covid-affected times.

As is obvious from the list, many artistes have experimented with different forms, blending with the global nature of music. Yet, the element of Indian music is very strong, whether it is Hindustani or Carnatic. On a day that celebrates music from across the world, it would be ideal to appreciate some of India’s contributions to the global scenario.