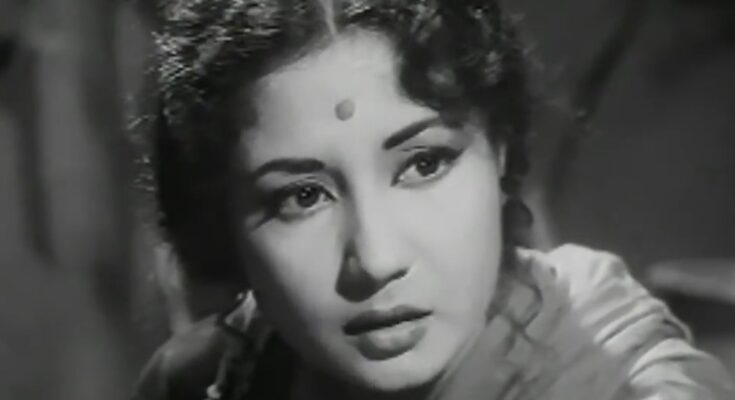 Though she passed away prematurely in 1972 at the age of 38, Meena Kumari had established herself as one of the most popular actresses in Hindi cinema. From the nature of her roles and her screen emotions, she was called the Tragedy Queen.

Musically, the bulk of her hits were sung by Lata Mangeshkar. From love songs to sad tunes and classically-inspired compositions, there was a lot of variety in these songs. Of course, while Meena Kumari had hits with Geeta Dutt (like ‘Na Jaao Saiyyan’ in Saheb Bibi Aur Gulam) and Asha Bhosle (‘Tora Mann Darpan Kehlaye’ in Kaajal), one mostly identified her with Lata’s voice.

To mark Meena Kumari’s 88th birth anniversary on August 1, we chose 10 solo songs sung by Lata. While most were musical hits, some of these songs created an impact with her performances or dance renditions. The order is chronological.

This song was in two versions – Rafi sang for Pradeep Kumar and Lata for Meena Kumari. Roshan set his composition in Maru Bihag, and Sahir wrote the single-line mukhda, “Dil jo na keh saka, wohi raaz-e-dil kehne ki raat aayi”. In both versions, the rendition of the words ‘raat’ and ‘aayi’ were very nuanced.

As mentioned, the songs covered a range of styles and emotions. Meena Kumari’s on-screen expressions matched the melodies perfectly. And though Lata also sang great numbers for most of the other leading heroines of the 1950s and 1960s, her Meena Kumari melodies deserve special mention.