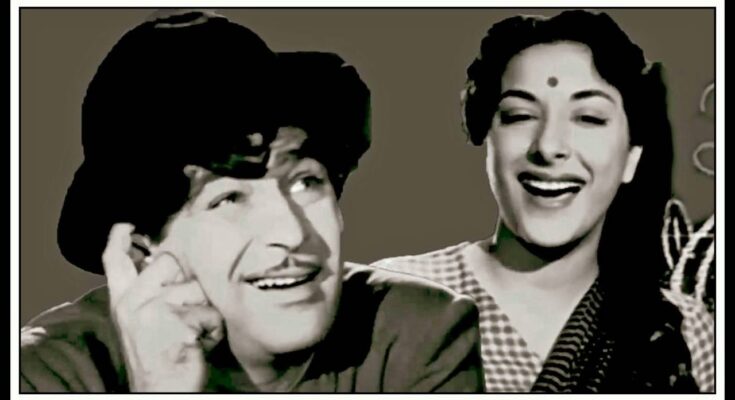 Music is at the top of the list when it comes to lifting the spirits.  Narendra Kusnur lists 10 top cheerful film numbers

Everybody loves a happy song, and it provides the best means to unwind. As the group Osibisa sang, “Dance the body music, music makes you happy.”

There’s no formula for what makes for a happy song. It could be a romantic number, or a song sung to celebrate an occasion. Sometimes, it may make you happy because of its words, when its tune may be ordinary. At other times, it may not even mean anything, but its rhythm keeps your feet tapping.

Thus, our choice of 10 happy Hindi film songs isn’t bound by any rules. We like them because they keep us happy. So shake your head, or get into a dance act. Enjoy.

The song lingers as an earworm primarily because of its peppiness. Music directors Shankar-Jaikishen maintained a vibrant rhythm and Lata Mangeshkar and Mukesh sang Hasrat Jaipuri’s words. The song was filmed on Nargis, Raj Kapoor and a group of school children.

One of India’s first rock n’ roll numbers, it was composed by C Ramchandra who was inspired by kids playing ‘Eenie Meenie Miny’. Though the Kishore Kumar version became more popular, there was a separate rendition by Asha Bhosle. In the mukhda, lyricist Rajendra Krishan chose to use words that didn’t have meaning. it worked.

Geeta Dutt was truly a versatile singer, and was joined by Lata Mangeshkar on this sprightly duet. Composed by the brilliant Vasant Desai and written by Bharat Vyas, it had the lines “Akhiyan bhool gayee hai sona, dil pe hua hai jadoo tona”. A nostalgic number.

Kishore Kumar did a few fantastic stretches of yodelling in this fun song, which formed part of the opening credits. He composed and sang the song himself, with Majrooh Sultanpuri writing the lyrics. A tough song to sing, but many have attempted it at parties and antakshri competitions.

The very way Mohammed Rafi began the song singing ‘Yahoo’, we knew we were in for a happy number. Shammi Kapoor’s dancing, Saira Banu’s presence and the snow-capped locales added to the mood of the song, composed by Shankar-Jaikishen and written by Shailendra.

When it came to exuberant songs, Dev Anand had his quota too. His typical gait added to the charm, as proved on ‘Yeh Dil Na Hota Bechara’. Kishore yodelled again in this S.D. Burman tune penned by Majrooh Sultanpuri. Tanuja provided the acting support.

A fun song composed by Rajesh Roshan and written by Amit Khanna. It was picturised on a group that included Amol Palekar, Tina Munim, Ranjit Choudhary and Pearl Padamsee, who also joined Lata Mangeshkar and Amit Kumar on vocals.

A large cast led by Amitabh Bachchan and Hema Malini appeared in this frothy number sung by Kishore, Asha Bhosle and others. R.D. Burman’s set the tune to Gulshan Bawra’s words. The film had another happy group song ‘Mausam Mastana’.

Ranbir Kapoor did a wonderful enactment in this peppy tune sung by Mohit Chauhan, composed by Pritam and written by Swanand Kirkire. The song had an effervescence that made it endearing.