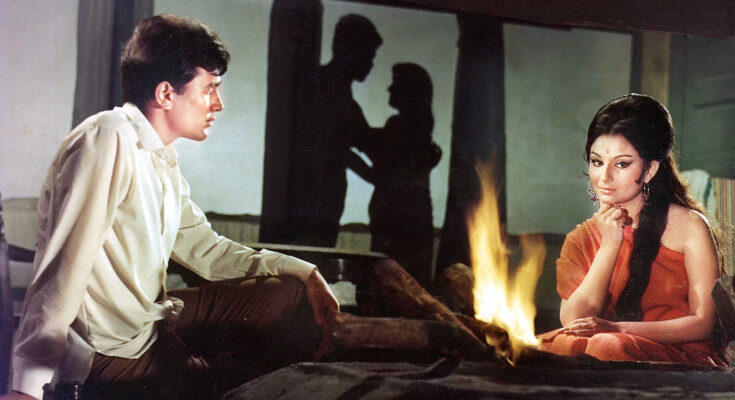 With audiences looking at whom songs were picturised on, the trend of hit pairs caught on and continued down the decades, writes Narendra Kusnur

The year 1949 was a landmark year for Hindi film music, as Lata Mangeshkar got major hits in Mehboob Khan’s Andaz and Raj Kapoor’s Barsaat. The first starred Dilip Kumar, Raj Kapoor and Nargis, and the latter had Raj, Nargis and Nimmi.

Both films had memorable music, and people began noticing how good Raj and Nargis looked together on screen and in songs. While they appeared, along with Dilip, in the Andaz song ‘Uthaye Ja Unke Sitam’ composed by Naushad, they made a wonderful pair in Shankar-Jaikishen’s Barsaat songs ‘Mujhe Kisise Pyar Ho Gaya’ and ‘Meri Ankhon Mein Bas Gaya Koi Re’.

Over the next few years, Raj and Nargis were the most popular screen pair, with some hugely successful songs. ‘Dum Bhar Jo Udhar Mooh Phere’ in Awara, ‘Pyar Hua Ikraar Hua’ in Shree 420, ad ‘Aaja Sanam Madhur Chandni Mein Hum’ and ‘Yeh Raat Bheegi Bheegi’ from Chori Chori were only some examples, and the music for all was given by Shankar-Jaikishen. The pair featured in rarer gems too, an example being the A.R. Qureshi (Ustad Allarakha) composition ‘Dil Matwala Lakh Sambhala’ in the 1952 film Bewafa.

Raj and Nargis set the trend of star pairs with a healthy roster of hit songs. Before 1949, K.L. Saigal, Surendra, Noorjehan and Suraiya were among those who had individual hits, but not anything regular with a particular co-star. In the 1950s, the other pair with musical success was Dilip Kumar-Vyjayanthimala, who appeared on ‘Kisko Khabar Thi’ (Devdas), ‘Mangke Saath Tumhara’ (Naya Daur) and ‘Dil Tadap Tadap’ (Madhumati). The pair worked together in the following decade too, and ‘Teri Husn Ki Kya Tareef Karoon’ in the 1964 film Leader was a great example of their musical screen chemistry.

While the 1950s provided great music, a lot of which is hummed or played even today, audiences always looked at whom the songs were picturised on. Some heroes and heroines appeared in great songs, and that trend of having a hit pair continued. Even filmmakers considered star chemistry in songs as part of their plans, and even created situations to accommodate for songs. Here we shall look at the combinations which were associated with some great songs, rounding off our list in the 1990s.

Let’s get back to the 1950s. Besides Raj and Dilip, the other major star in that period was Dev Anand. He actually appeared in popular songs with various heroines, including Nutan, Kalpana Kartik and later Zeenat Aman and Hema Malini, but some of his best were with Waheeda Rahman. The list included ‘Jaata Kahan Hai Deewane’ in CID, ‘Apni To Har Aah’ and ‘Rimjhim Ke Tarane’ in Kala Bazar, ‘Hai Apna Dil’ in Solva Saal, ‘Na Tum Hamein Jaano’ in Baat Ek Raat Ki, the Guide masterpieces ‘Aaj Phir Jeene Ki Tamanna Hai’ and ‘Gaata Rahe Mera Dil’, and the Prem Pujari song ‘Shokhiyon Mein Ghola Jaaye’. Dev’s frothiness went perfectly with Waheeda’s grace.

Among the other 1960s actors, Shammi Kapoor had a number of hit songs. And though he did more films with Sharmila Tagore (Kashmir Ki Kali, An Evening In Paris) and Asha Parekh (Teesri Manzil, Dil Deke Dekho, Pagla Kahin Ka), he wasn’t associated enough with any single heroine to be called a hit pair. The same was the case with other heroes Rajendra Kumar, Manoj Kumar and Shashi Kapoor, and popular heroines Madhubala and Meena Kumari.

Sharmila, in fact, had a number of hit songs with Rajesh Khanna, beginning with the superhit Aradhana in 1969, with music by SD Burman. With ‘Mere Sapnon Ki Rani’, ‘Roop Tera Mastana’ and ‘Gunguna Rahe Hain’, the two had announced their arrival as a musical jodi. They later worked together in Amar Prem, Safar, Daag, Aavishkar and Raja Rani, among other films.

The 1970s was perhaps the decade which had the maximum number of hit jodis. After Rajesh-Sharmila, it was the turn of the evergreen duo of Dharmendra and Hema Malini, who were filmed on numerous songs including ‘Kitne Din Aankhen Tarsengi’ (Naya Zamana), ‘Tera Peecha Na’ (Jugnu), ‘ABCD Chhodo’ (Raja Jani), ‘Koi Haseena Rooth Jaati Hai Toh’ and ‘Holi Ke Din’ (Sholay), ‘Ke Aaja Teri Yaad Aayee’ (Charas) and the Dream Girl title song.

Amitabh Bachchan, who took over as superstar from Rajesh Khanna in the mid-1970s, initially had hit songs with Jaya Bhaduri in Ek Nazar, Abhimaan and Mili. The Abhimaan tunes were composed by SD Burman, and ‘Tere Mere Milan Ke Yeh Raina’, ‘Teri Bindiya’, ‘Lute Koi Man Ka Nagar’ and ‘Nadiya Kinare’ were evidence of their coordination.

From that point, many actors worked together on numerous songs, which were not always successful, but went well with the film’s scripts and visual value. Jeetendra had many songs with Sridevi and Jayaprada, and Govinda appeared often with Karisma Kapoor in the 1990s. Aamir Khan and Juhi Chawla had a huge hit in Qayamat Se Qayamat Tak, but their later films together didn’t have the same kind of musical success. The 1970s and 1980s also had combinations like Sachin-Sarika (Geet Gaata Chal), Amol Palekar-Vidya Sinha (Chhoti Si Baat) and Farooque Shaikh-Deepti Naval (Saath Saath), but their musical success was limited to a few films.

From the mid-1980s, Anil Kapoor teamed up wonderfully with both the top heroines Madhuri Dixit and Sridevi. With Madhuri, he had massive songs like ‘Keh Do Ke Tum’ in Tezaab, ‘Main Name Is Lakhan’ in Ram Lakhan, ‘Tum Se Milke’ in Parinda, ‘Dhak Dhak’ and ‘Koyal Si Teri Boli’ in Beta and ‘Kismat Se Tum’ in Pukar. And with Sridevi, he had ‘Karte Hain Hum Pyaar’ in Mr India and ‘Kabhi Main Kahoon’ in Lamhe.

After that phase, Salman Khan and Madhuri combined well in the songs of Saajan and Hum Aapke Hain Koun. But the biggest 1990s duo was Shah Rukh Khan and Kajol, with ‘Baazigar O Baazigar’ and ‘Yeh Kaali Kaali Ankhen’ (Baazigar), and ‘Jaati Hoon Main’ (Karan Arjun), besides the super-successful soundtracks of Dilwale Dulhania Le Jaayenge and Kuch Kuch Hota Hai.

While there were many well-known combinations in the period leading up to the 21st century, only a few really came to be known as a hugely successful pair. In terms of prolificity, consistency and quality of hit songs, Raj Kapoor-Nargis, Dharmendra-Hema Malini, Amitabh Bachchan-Rekha, Rishi Kapoor-Neetu Singh, Anil Kapoor-Madhuri Dixit and Shah Rukh Khan-Kajol surely led the list. But the truth was that all these actors had numerous hit songs with other co-stars too.