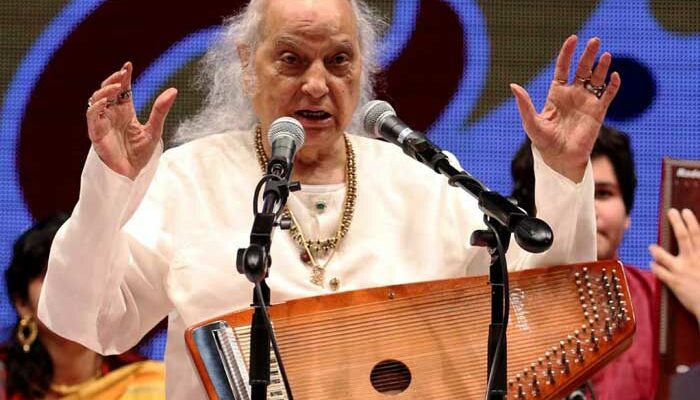 Celebrated vocalist Pandit Jasraj passed away on Monday, August 17. He was 90 and had a musical career spanning over eight decades. A recipient of several awards including the Padma Vibhushan (and earlier Padma Bhushan and the Padma Shri), Panditji belonged to Mewati Gharana. In October last, Seniors Today magazine had carried an article by Narendra Kusnur, given that a planet was named after Pandit Jasraj, the previous month. We republish the article with our condolences to the bereaved family and the large family of music-lovers across the world.

Monday, September 30, the Arts And Artistes office of television personality and event promoter Durga Jasraj was buzzing. Just two days before, the International Astronomical Union (IAU) had announced that it had named a minor planet after her father, the legendary vocalist Pandit Jasraj.

The title is conferred on luminaries across fields, and musicians to earlier receive the honour include western classical composers Wolfgang Amadeus Mozart and Ludwig Van Beethoven, and operatic tenor singer Luciano Pavarotti. Interestingly, a week after the announcement was made, sitar player Anoushka Shankar claimed that a minor planet had been named after her in 2017.

Jasraj was in the US when the news got out and sent a statement for the media. “Blessed… in this honour, one can only experience God’s grace,” he said. The minor planet, discovered on November 2006, has been named ‘Panditjasraj (300128)’, the six digits referring to his date of birth. The maestro will turn 90 on January 28.

In March this year, the Mewati Gharana maestro’s 89th birthday had been belatedly celebrated at a concert at Mumbai’s Shanmukhananda Hall, where he sang Raag Jog, his famous ‘Mata Kalika’ in Raag Adana and the bhajan ‘Om Namo Bhagavate Vasudevaya’. Despite his age, he didn’t look tired or let his voice waver even once.

Having attended that concert, and interviewing him a few days prior to that, a river of memories flowed through my mind. I first met Jasraj in 1971, when I was barely eight. My mother learned vocal music from his senior disciple Chandrashekhar Swami, and visits to the Jasraj residence at Rajkamal building in Mumbai’s Shivaji Park were regular. His students and their disciples would practice, and I would play with Durga and her elder brother Shaarang. 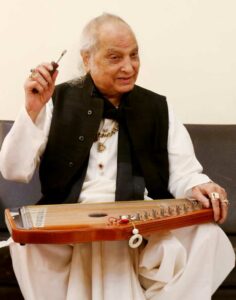 A smile and a half-jacket

In his early 40s then, Jasraj had thick curly hair, a ready smile and a friendly demeanour. At concerts, he would wear a half-jacket over his spotless kurta and carry the swarmandal. The first concert I attended was in a hall in Thane. At that age, I knew nothing about raags though I had heard their names from my mother and her guru. When Jasraj announced he would sing Malkauns, I got up and started dancing, little knowing what it meant.

Jasraj was quite well-established at that time, though the world of male vocalists was led by Ustad Amir Khan. Pandit Bhimsen Joshi and Mallikarjun Mansur were seniors. Among women, Hirabai Badodekar, Gangubai Hangal, and Kishori Amonkar made waves, and the young Parveen Sultana had just arrived.

Music in the air

After we shifted to New Delhi, visits to Rajkamal stopped. But I would accompany my parents to his concerts in the capital. One memorable show was a dance ballet interpretation of Jayadeva’s Geet Govind, in which Jasraj composed the music. Cassettes of his recordings formed a large part of the collection at home, and Raags Bhairav, Bihag, Maru Bihag, Jog, and Hansadhwani were played often, besides the Meera bhajan ‘Mai Saawari Rang Raachi’.

Like most teenagers, I listened to western and Hindi film music too, but classical was always around. I still didn’t really understand the nuances, but there was something magnetic about those melodies. Often, ‘Lai Ja Re Bhadra’ in Hansadhwani or ‘Ja Ja Re Apni Mandirwa’ in Bhimpalasi would stick on as earworms.

I never imagined I would meet Jasraj at close quarters, but the opportunity came in the mid-1990s after I became a music journalist. Though I met him briefly at many events or after concerts, it was during the course of three interviews that I could talk to him at length. Before the first one, in 1998, I was obviously nervous. It’s always difficult to ask questions to someone one has known and admired, but Jasraj quickly put me at ease.

The other interviews were followed by a family meal at his Andheri residence. In the first one, he finished his dinner and just began singing a few lines of Raag Darbari, using his fingers to play an imaginary tabla on the dining table. In the second, he watched the ongoing India-Australia cricket match and commented after almost every ball.

The conversations revolved around a variety of subjects, like how he would stop by at a restaurant at Hyderabad to hear Begum Akhtar sing ‘Deewana Banana Hai Toh’ on the radio, his early training under his eldest brother Pandit Maniram, how he played classical melodies on the guitar, and his tabla guidance from his other brother Pandit Pratap Narayan.

A galaxy of pupils

Besides Maniram, Jasraj learned from Jaywant Singh Waghela and Swami Vallabhdas Damulji. “For me, they are like Brahma, Vishnu, and Mahesh. Besides honing my skills, they helped me carry forward the legacy of our Gharana,” he said.

Though the vocalist initially taught Maniram’s students in Kolkata, his first disciple was Chandrashekhar Swami in Mumbai. Soon, Girish Wazalwar and Paresh Naik joined him. Today, he is the guru of numerous musicians including vocalists Sanjeev Abhayankar, Tripti Mukherjee, Ankita Joshi, and his nephew Rattan Mohan Sharma, besides violinist Kala Ramnath and flutist Shashank Subramanyam. He also actively teaches at his institute in New Jersey, New York, and Pennsylvania.

“I don’t go about looking for disciples. But if I find someone genuinely interested, I happily accept them. By teaching, I am practicing too. If you don’t use a car for a long time, it won’t work properly. The same is the case with your voice or musical instrument,” the doyen said.

Jasraj loves to compare his concerts with a hockey match. He elaborated, “I am usually accompanied by my disciples. It’s like I am passing the ball to them and they send it back before I score the goal.”

At 89, Jasraj not only takes care of his voice but makes sure he leads a disciplined lifestyle. He speaks very clearly and displays a sharp sense of humour. The magic is evident both on stage and off it. Those who’ve known him over the years will agree.