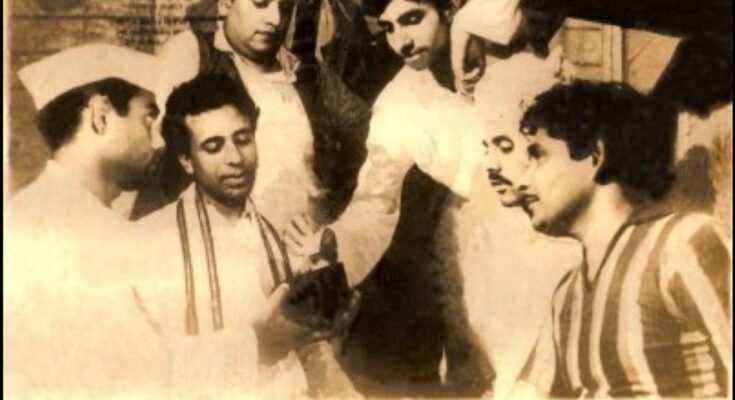 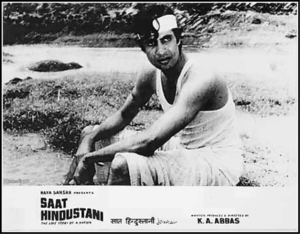 A small film with new actors might have been forgotten, but for the fact that one of them went on to become India’s biggest superstars.

Saat Hindustani, directed by KA Abbas was released on November 7, 1969, making it 50  years since Amitabh Bachchan made his debut.

The tall, lanky actor was deemed unsuitable for mainstream Bollywood and got his first break from Abbas, an acquaintance of the family, who also cast in the film a pick of theatre actors and some kids of industry folk.

When the film came out, his angry young man days were still a few years away—Zanjeer was released in 1973—but that intensity was very much on view in his role as a poet, and India’s most famous hairstyle was in place.

The film also remains one of the few that captures the Goa Liberation Struggle, a major event in contemporary history.

Saat Hindustani starts in a Goan hospital, where Maria (Shahnaaz—daughter of Jalal Agha and wife of Tinnu Anand) awaits life-saving surgery, but wants doctor (AK Hangal) to hold off till her buddies arrive. This being the era before the telecom revolution, a nurse is dispatched to send off a bunch of telegrams to six men whose photographs are displayed on her bedside table.

As she tells the nurse their addresses, the viewer is introduced to each of them—Subodh Sanyal (Malayalee actor Madhu) is a football referee in Calcutta, and witnesses a riot after a game. Joginder (Utpal Dutt) is a farmer in Punjab, with Dina Pathak as his wife, who is aghast that his beloved state has been divided again and Haryana carved out of it. 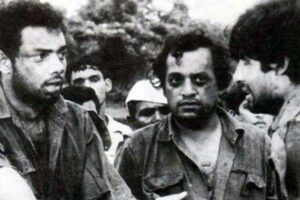 In Madras is a Dalit called Mahadevan (Irshad Ali), who is caught up in the anti-Hindi campaign, while in Banaras, Ram Bhagat Sharma (Anwar Ali—Mehmood’s brother) is agitating against English, and in Ranchi, the Urdu poet Anwar Ali (Bachchan) faces violent anti-Urdu protestors. Lastly, is a Maharashtrian Sakharam Shinde (Jalal Agha—actor Agha’s son), who acts and sings in a local theatre group, while the state deals with border disputes with Karnataka. (Interestingly, Abbas did not make the actors play characters from their own states.

There is strife and unrest everywhere, as Maria flashes back to Goa, which was still under Portuguese rule and a struggle was on to liberate it (which happened in December 1961).  The Portuguese are carrying on propaganda to convince Goans that Indians do not care about them, so it is decided to send a group of volunteers into Goa and help the locals in their fight for independence.

Six men are picked, trained in warfare, and sent to infiltrate Goa. After throwing a spy off the train—which disturbs Anwar and convinces the others that he is not tough enough—the warriors reach Goa and are joined by a young woman, Maria.

The mission assigned to the Saat Hindustani is to attack seven Portuguese police posts in Goa and hoist the Indian flag (that they are all carrying) over them to prove the might of India. The film is about how the seven to overcome obstacles in their way (including torture by the Portuguese cops), as well as differences amidst themselves. 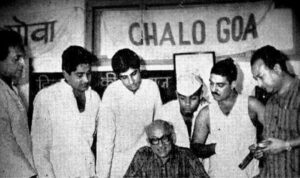 The film, obviously inspired by the Japanese classic, Seven Samurai (Akira Kurosawa – 1954) and Hollywood’s cowboy remake The Magnificent Seven (John Sturges – 1960), added large doses of patriotism, and songs to retell the classic story of outsiders coming in to help the local populace. Abbas, always a writer and filmmaker who wanted his films to convey a social message, made his point about patriotism and national unity, even though the film, seen now, seems shockingly amateurish.  It is worth seeing, however, to see how little has changed in India in the interim half-century, and, to a much lesser extent, spot the beginning of several successful careers – the biggest, of course, being that of Amitabh Bachchan.