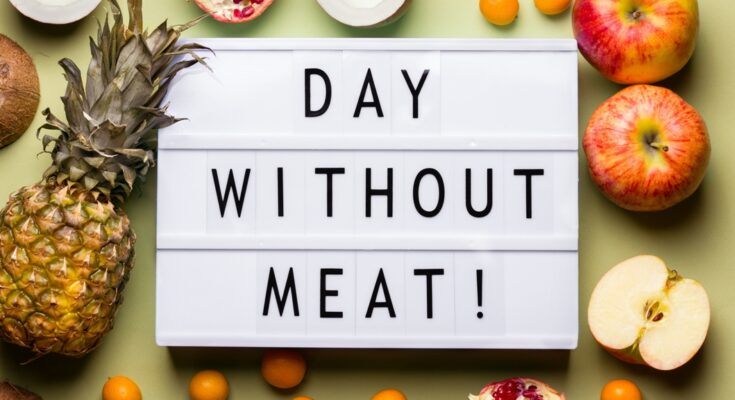 Have you heard of the global movement Meatless Mondays?

“In 2003, John Hopkins Centre for a livable future began the Meatless Monday Movement. Meat Free Monday, Green Monday and adaptations in twenty-two different languages has taken root in over forty countries. The movement to skip meat once a week continues to grow as more and more people are finding innovative ways to make meatless dishes part of their everyday culture, customs and cuisine.”

The biggest myth, of course, is that India is a largely vegetarian country.

Only about twenty percent of Indians are actually vegetarian. What largely exists’ are cultural and religious pressures to fast or be vegetarian on certain days.

The environmental, financial, and health benefits of not eating meat one day a week might convince you to give it a try.

Not sure if you’re ready to take the leap? Let me break it down for you.

One day a week, would be fifty two days in a year, a hundred and four days in two years and so on, It all adds up.

According to United Nations scientists, not eating meat has huge benefits not just for ourselves but meat production is a leading cause of climate change, water depletion, soil erosion and most other environmental problems. Forget energy-efficient light bulbs or hybrid cars, the best thing we can do to help the environment is to stop eating animal flesh. The World Health Organization warns that processed meats rank alongside cigarettes as a major cause of cancer.

Benefits are immense with just this small switch and might just be enough to make life look a whole lot more appealing than it did before.

I always like to look at both sides of the coin,

Is it OK to eat meat or should we be worried?

What do all these studies mean and what they don’t?

As a meat eater all my life I can say my hemoglobin levels are intact through illness and health.

As Dr Mark Hyman aptly talks about the user effect “Its not the cow it’s the how”, strictly grass fed animals,eat the right meat. Factory farm meat its bad for you, the environment and animals. Eat in the right context of food.”

As years have advanced, I have made adjustments and here’s what I endorse

Are you the sort of person who says they couldn’t live without a burger?

Or the kind who simply can’t imagine having to eat nut roast instead of your usual roast chicken?

Lets look into how giving up meat for just one day a week can be beneficial.

The Health point of view:

Choose fresh meat and only buy from producers who treat the animals fairly.

When it comes to meat consumption quality, not quantity is what’s important.

Try to limit it to one meal.

A laundry list of health benefits, include improvements to your skin, digestion, energy levels, and immune system heart health, kidney health and decreasing your risk of obesity and type2diabetes. All long-term perks to wellness.

The Heart point of view:

Climate change, Forest fires, Cyclones, tsunamis, more buildings less trees, e-waste, plastic islands in the ocean, is no more an issue we can push under the carpet. Our Earth is yelping for help to stay afloat.

Are you doing your bit to save the planet?

Eating vegetables and grains directly instead of funneling them through animals, uses far less land and water, that’s why the UN has said that a global shift towards a vegetarian diet is vital to save the world from the worst effects of climate change.

More than half the world’s crops are used to feed farmed animals not people. Billions of people go hungry. Help fight world hunger.

You can eat some seriously delicious food.

As the demand for vegetarian food skyrockets, companies are coming out with more and more delicious vegetarian meat and non-dairy foods, which have all the taste of the real stuff, but none of the cholesterol or cruelty. Treat yourself to a new cookbook maybe, or get following some veggie food bloggers on social media.

You might think one day a week wont make much of a difference but hey, it takes drops to make an ocean, so everyone counts to, help save our earth, bring more wellness to mankind and set the animals free.

I did it wont you?