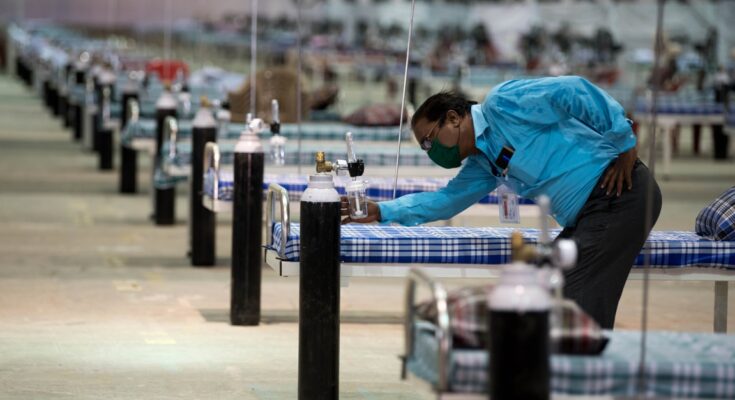 India finds itself in the throes of a humanitarian disaster. Until March 2021, case numbers were low in most parts of the country, leading many to think that the worst was over. Much like in Brazil though, jingoism, overconfidence and false reassurance from the political elite negated hard-won progress.

Mass gatherings have acted as state-sanctioned super-spreader events. More infectious variants and a sluggish uptake of vaccines are also fuelling the current stage. These are the triggers, but there are more deep-rooted issues at the heart of the current crisis.

India is an inherently high-risk country for an epidemic. The country holds 1.4 billion people, living in crowded areas with extensive community networks and limited facilities for sanitation, isolation and healthcare.

Most do not have the luxury of isolating at home for prolonged periods. Over 90% workers are self-employed with no social safety net. The vast majority rely on daily earnings to put food on the table. Many predicted that because of all of this, the initial wave of Covid in 2020 would have a devastating impact.

The fact that it did not led some to believe that the Indian population was innately less vulnerable to Covid. An old theory, the hygiene hypothesis was dusted off in an attempt to explain the low number of cases. The idea is that poor hygiene trains people’s immune defenses, so when people are exposed to the coronavirus, their bodies are well-equipped to deal with it.

But this theory largely relied on population studies that failed to account for various factors involved in disease severity at an individual level. Even with higher quality research, correlation does not imply causation, especially with the threat of new variants on the horizon. And yet this theory settled comfortably into the national psyche of a traditionally patriotic country.

Complacency gave the coronavirus an opportunity to spread. Unlike in the first wave though, proportionally more cases have progressed into deaths this time around because the health system was overwhelmed. Supplies of oxygen, ventilators, health workers and beds are critically low in hotspots like Delhi. But the fact that so many require medical care in the first place, is a symptom of longstanding structural deficiencies in the Indian health system.

Age is the single big risk for severe disease and death with Covid. India has an exceptionally young population, with only 6% 65 and over Even with a slightly more deadly virus, one would expect most to recover at home without the need for hospital care. But a relatively unhealthy middle-aged population in part offsets this advantage.

Air pollution is closely associated with lung and heart disease. A whopping 17.8% of all deaths in India were due to pollution in 2019, and Delhi, currently flooded with COVID patients seeking oxygen, is the most polluted capital in the world.

Obesity is also a growing concern in India, with high rates in urban areas where Covid outbreaks have been most concentrated. The prevalence of diabetes in those aged 50- 69 years is much higher than in other Asian countries. One in five women of reproductive age has undiagnosed high blood pressure.

All of these are significant risk factors for death from Covid. Having an unhealthy population also leads to excess death because non-Covid health services are suspended during such emergencies.

Despite these health needs, total health expenditure in India represent only 3.9% of GDP, well below the 5 % minimum recommended to achieve universal health coverage. The nation remains starved of the resources needed for a robust, resilient and well-equipped health system.

What money is spent goes into an expensive hospital-based system predominantly delivered through the private sector. Most people do not have insurance and pay for care out of their own pockets. This can lead to unnecessary costs and delays in seeking care or getting tested, which is critical to controlling epidemics in the early stages.

No incentive to prevent disease

Private institutions operating in this way rely on people becoming unwell to generate revenue. There is no incentive to prevent disease. A largely commercialised and profit-driven system centered on treating disease has skewed investment away from essential public health functions. It is this market failure that is in part responsible for India’s ailments, and many avoidable deaths during this epidemic.

Despite a recent expansion of primary care centres and a large health insurance scheme for the poor, infrastructure remains poorly aligned with need. As a result, capacities for infectious disease control like surveillance, testing, contact tracing, guidance and research were limited at the start. Efforts to prevent and control chronic diseases have also been traditionally neglected despite their escalating burden and early onset in the Indian population.

India is a high-risk setting for an epidemic, but the current situation was not inevitable. As more are infected, the pool of susceptible people will shrink, the virus will relent, and the country will rebuild. There will be a chance to reflect on the fundamental goals of the health system. For future epidemics, bolstering hospital capacity will be necessary but not sufficient. Death must be averted not just by treating disease, but by preventing it altogether.