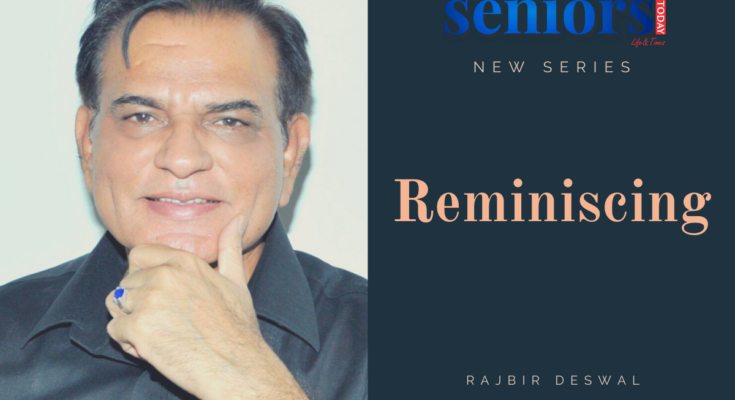 Hardwar Pandas and My Accidents

The records of our family pandas in Haridwar show that one of my ancestors, Chaudhry Husnaq had carried my great grandmother’s ashes there in 1874. Many people immersed the ashes in Garh Ganga too.

Every six months, a panda assisted by his junior, used to visit Anta to update his records, and collect clothes and food grains, primarily. Every woman in the clan knew them well and welcomed them. The panda used to carry a pocket size bahi (notebook). He would enquire about the births in the family and record the details in his bahi.

Whenever he visited us, he would call out for my mother loudly and say “May God bless you Rajbir’s mother”. Hearing this my grandfather would mutter from the terrace: Aa gaye fasli bater (Here they are—the seasonal migratory quails!) The panda would ignore his wry remarks and enter the house when my mother signalled him to occupy a seat, from behind her veil.

Once inside, the panda would read the palms of every girl in the household. He would generally make pleasant predictions about their future. The panda perhaps realised that if he predicted something bad about the girls, no one would seek a solution to the problem and pay him for that instrumentality called Upay.

But with boys, it was different. He was clever enough to realise that unless he predicted an ill omen for a male member, he would not get paid handsomely and appropriately. So, whenever he would read my palm, he would pose to study it closely, silently. The silence provoked my mother to ask if he could see something bad. Then he would start: “Do not mind it Rajbir’s mother, but your son is likely to be hospitalised in the month of Phagun (around time March).”

Shocked, my mother would put her hand to her chest and ask for a solution—an upaay—to the problem. He would then gladly offer the solution. “Sew a bag from a piece of cloth measuring five times the size of the boy’s feet. Fill it with wheat and blacken its corners. Place an earthen idol of Lord Ganesha in it and donate it to a Brahmin. Also put some turmeric. God will take care of your son.” By the time the panda left in the evening, his bags and pockets were bulging.

I had made fun of the panda who had predicted my hospitalisation. But it had so happened actually, that I was in class six that year, and my right hand had been fractured while playing with my elder sister Anita. It had to be encased in a plaster cast for three months. It used to itch a lot and my efforts to satisfy the urge with twigs and knitting needles had caused a wound inside. In school, I would threaten to hit my classmates with the stone like plastered hand, should they mess with me. I wrote my examinations with less moving fingers while the entire palm being in the cast; and I stood first in the class.

My grandfather was fond of horses. He had a couple of them. I was then two years old when Dada Ji’s mare kicked me in my forehead while I was hollering behind her. The mare was on her tether in front of my grandfather’s baithak. I had a dawanni (two anna coin) and a one paisa bronze coin with a hole in the centre, with which I was playing. My two anna coin called hit the mare in the leg and the mare’s leg hit me on my forehead in turn. Kuldeep chachaji picked me up and ran to my mother. My shirt was blood stained, so was Chacha ji’s who ran towards my mother, shouting: O bhabhi (sister-in-law) we have lost everything!

Seeing me in blood and unconscious, my mother dropped my two month old sister Rekha from her lap. I was born after the birth of three sisters. The fourth had followed my arrival to the world. So, I was precious to the family. I had fourteen stitches on my forehead. The marks are still there. All this I remember as the story was often narrated in the family. Rekha still feels bad about her having been dropped from the arms of my mother.

I am told somebody had predicted three such incidents and that was why my mother worried so much about me. I was never allowed to climb a tree or bathe in the Anta canal. I was not allowed to play gilli-danda or any other game. If my mother could have her way, she would not have allowed me to ride a horse during my training as a police officer. My mother did not have any brother except an adopted one. She saw in me both her brother and her son. That’s why she had named me as Rajbir. My mother’s name was Raj. And Bir in Haryana is a brother.

Once, as a grown up man, I was bed-ridden for three months due to jaundice. My mother wanted me to visit an exorcist in Diwana village near Panipat for ‘Jhada’—invoking good spirits. Even though I had no faith in such occult practices, I went on insistence from my mother. The so-called exorcist asked me to lift my shirt and he ran his fingers several times over my chest. Then he said I could go. Believe it or not, but my serum bilirubin level fell from 13 to 1.5 on third day itself. My mother said had I heeded her earlier, I would not have suffered so much.

Sure, it must have been some kind of a fluke, yet mother felt it was due to the Jhada treatment.