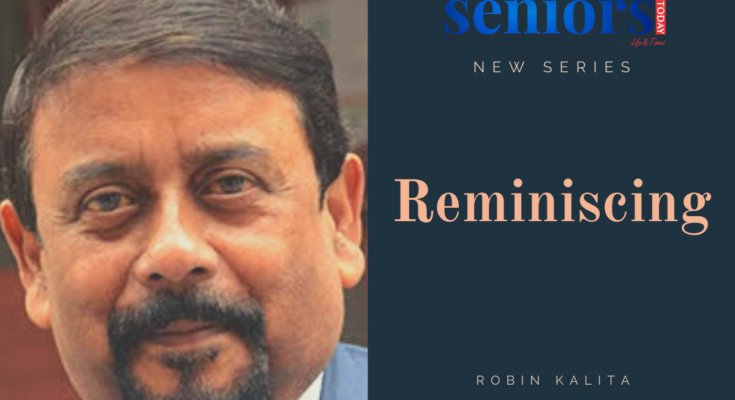 Childhood memories come alive to all of us at random, depending on what our dispensation is and what thoughts we are engrossed in at that point of time. Some memories are hilarious, some are poignant and still others remind us of events of the yesteryears, floating into our minds’ eyes almost like dreams, of beautiful moments we spent with our family members, friends and acquaintances.

Even while I am trying to write this piece for “SENIORS TODAY”, what comes to my mind is the predicament I faced as a very young child about my future. The problem started with my father’s friends asking me the question,

“What do you want to be when you grow up?”

…To which I had no answer. Simply because I had no idea what I should, or for that matter, could become. I wracked my brain, but could not arrive at any solution. I asked a couple of my friends, who, like me, were totally ignorant on the issue. I had sleepless nights for fear of being asked the same question the next day. I opened my text books for clues but did not find much help: they presented copious material on Gods, Kings, Scientists, Artists, Magicians, Warriors, Priests, Demons……… none of whom I could ever become. I could not ask for help from anyone else, lest I became a laughing stock.

At last, the eureka moment came when I was deeply entrenched in my “Think Tank” – the service latrine in which I was habituated to spending long hours (at that age my knees were strong enough to support my weight in that sitting posture), drowned in deep thought,regardless of the commitment for “discharge” of duty, till I was hounded out by my mother. On that fateful day, I vaguely remembered a word used by my father to describe a gentleman in our neighbourhood – the person who went out every morning in khaki dress – something exclusive, since neither my father nor any other neighbour uncle had this privilege.

The word was “Chatri”, no – “Chatras”, no no “Chapras”……. Was it “Chaprasi”? ……. Yes, of course, it definitely was “Chaprasi”. Realisation dawned upon me at that glorious moment, despite the stiflingly foul odour emanating from below, that I knew what I wanted to be when I grew up – a CHAPRASI …… !

I felt not only relieved that I found a solution to my vexed problem, I also began to feel a sense of pride at the thought of going out for work every morning in khaki dress, something which would make my parents, particularly my father, a Government employee, extremely proud of their diligent and industrious son!

A few evenings later my parents and I were on the ferry, crossing river Brahmaputra. There was a big rush as it was to be the last ferry of the day. The passengers were talking loudly,exchanging pleasantries about the weather, anguish at the rising price of vegetables in the market etc. However, none of them as much as noticed me, leave alone ask me the prized question as to what I would become when I grew up, the answer to which I had on the tip of my tongue, this time around. Frustrated by the total absence of attention paid to me by anyone, I broke into a song loud enough to make heads turn towards me. I noticed that my father’s face had gone red in embarrassment seeing his son behave abnormally in public. He reprimanded me with an attempt to stop me, but that failed to make any impact on me. One gentleman asked my father to let me continue as he felt that I was singing well. He even commented that I was quite talented. After I stopped, the person came forward and offered me a coin as a reward for my singing. This prompted several others to fish out coins from their pockets and push them into my small palms. While I was basking in the glory of having earned so many coins, which never before did I dream of owning, one passenger asked me,

”Where are your parents? Why have they engaged you in begging?”

“You should go to school instead of begging”.

A third commented that I could become a good singer if I got training. This went on till my father came forward and gave me a tight slap and shouted at me to return the coins. Suddenly, silence descended on the crowd and the only sound audible was the whine of the ferry engine.

My father apologized to the gathering for the unwarranted ill behavior of his son. The gentleman who initially gave me a coin came forward and pushed another coin into my palm saying,

”Son, this is a prize for your talent and not alms. Keep it or buy a chocolate for yourself. Your father should be proud of such a talented and smart son like you! You must aim to become a great singer when you grow up, son”.

I decided that this was the opportune moment to announce publicly what I had been nursing so carefully in my mind, and I grabbed it: I faced the crowd, looked in the eyes of the benevolent gentleman and spelled out in as somber a voice as I could muster,

”But Uncle, I have already decided what I want to become when I grow up”.

“What do you want to become?”, asked the crowd in unison.

I took a deep breath, surveyed my audience carefully and announced:

I answered with my nose in the air and my face beaming with a sense of having conquered the world!

I paused for a few moments expecting a flurry of appreciation and applause. But, instead, there was a loud guffaw in the crowd that lasted for a few minutes. Even my angry father and embarrassed mother could not help breaking into laughter. Several passengers came and patted my back and wished me success in life. Some of them said I must work hard to fulfill my dream. Meanwhile, the ferry touched shore. What I failed to understand was why they roared so loudly, for so long.

It took me myriads of sittings thereafter in my “Think Tank” to realize why I generated so much mirth that evening on the ferry. I actually could not become what I dreamt to be, but the very thought gives me a lot of solace. My penchant for the khaki dress remains a secret craving in my mind, even today.

(This is a true story that actually happened in my childhood. I do not intend to hurt anyone’s sensibilities by alluding to a particular designation, a Government functionary of substantial importance.RK)