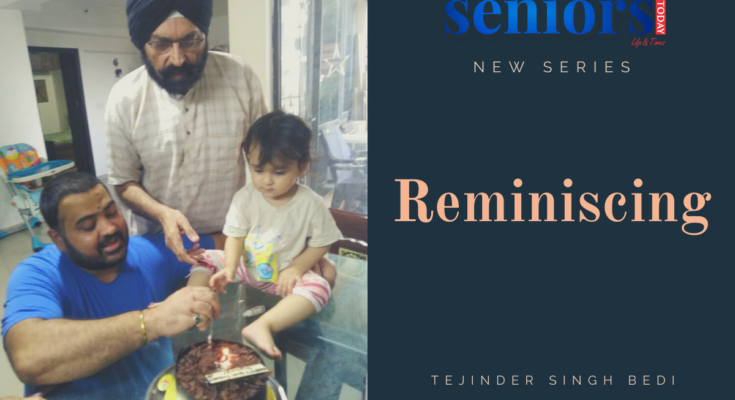 Covid Times also serve up “The Fruits of Staying Together”. Families together can fight such catastrophic times much better and no nursing staff can replace a loving son’s or daughter’s personal touch and care in such trying times!

We are a joint family of five of us staying with my son, (Jasmeet Bedi) in Noida. Ever since Feb 22nd, 2020, we ( my wife and I are both above 66),  and our granddaughter (Saira Bedi Talwar) now just 18 months old have not stepped out even once except for our vaccinations against Covid  this March & April.

The little angel growing within the four walls of our apartment or at best wondering as she looked at many small kids in age groups 4 to 16 playing freely in the central park staring into our balconies from within the society. Some parents were bold enough to even take their infants out on strolls in their prams but none of this tempted us to venture out except for completely unavoidable medical needs of the family. To say just for the scheduled vaccinations of the growing infant with her parents and for us senior citizens for two to three compulsive visits to get our broken specs fixed or a few medical emergencies that fortunately came under control quickly. But all these adventures were attempted only until April this year and none later thereafter ever.

Still, we got the first knock of the dreaded Covid in the family around  April 21, when my daughter-in-law (Tamanna Talwar Bedi) was the first to experience definite symptoms of this uninvited guest and tested positive on April 23. This besides, it is difficult to state as to who might have first got it in the family even as an asymptomatic case.

So our countdown started on April 23. Since it was next to impossible to separate the 18 month old from her mother, our little Lilly became the next natural victim. And then, first my son and later both of us were in the tight grip of this notorious disease in the next 72 hours following its acknowledged entry.

Our first five days were horrible to say the least. My little granddaughter was isolated from us with her parents, reeling under high fever of 103 to 104 degrees Fahrenheit with no support from us as for our daughter-in-law and son too, both too worried about us not contracting it from them. All that we could do was serve basic necessities from the doorstep of their room in our  own house and knock on the door for them to pick it up. It was emotionally breaking everytime we tried to converse with each other peeping through the glass door or the window outside.

By April 27, all having picked it put us all as “equal” human beings again and it was a conscious decision to bring down these separating walls among us all and even as Covid victims, we suddenly seemed to be enjoying a fresh lease of independent lives though by then we had all lost both of our smelling and taste senses to a great extent!

Thanks to Waheguru, thereafter we could still look after each other in the best ways possible though it was my son who bore the maximum brunt as always in ensuring we got all our periodic tests done besides ensuring all essentials & basic needs for the house including medicines then so difficult to be able to pick up from just one source; the failure ratio for each prescription being 1:10. All domestic help, maids and our regular cook had been blocked out on 21st April itself. Self management in a depleted state was on its acid test. Maybe our own cooking now was making the meals smell and taste like kerosene oil! Our next door neighbours were nice to serve us with hot soup, kaddhi curry left outside the flat after a sweet whatsapp update for our quickest recovery. It was just as kind for our regular cook (Assiya) to prepare meals for us at her house nearby and serve the same to us at our doorstep at least once in a day for all the days gone till our full recovery.

Must say, we deem ourselves to be far luckier that we could manage with all the medication protocols without a single miss. Each of us worked as an auto reminder for the other to make sure no one skipped his or her schedule of dose as required as also for the periodic inhalation of steam and intake of warm water.

It was a conscious decision of the family by the fifth day that we will all bear the challenges involved in its recovery from our home only and not fall a prey to the depleting shortages of hospital beds, having to wait in the long serpentine queues under the scorching Sun outside with increasing fears of shortages of oxygen, support infrastructure in the ICUs and Ventilators in almost every hospital around. And it worked really well.

Our other best source of strength was our grandson (Eshan Ummat) and his parents (Tarun & Harsween Ummat) who stayed in constant touch from Singapore to keep us all cheered up despite the increasing frustration for not having been able to visit each other for nearly two years already due to this dreaded pandemic.

Fighting the great battle together by itself had become a great morale booster for all.

I think in the current scenario of the healthcare infrastructure, supply chain of most medicines, repetitive cost of several medical tests becoming unavoidable irrespective of the fact that in each case the test reports landed much later than even the start of the medication protocols that actually worked even in the absence of these the decision to stay put at home had still proved to be a much better option.

While my wife (Ravinder) was the first to come out, my fever took the longest to get normal after 15 days or more though the hangovers of the disease in the shape of a little dizziness or spinning of the head , headache, pain in the throat and a drying cough did last for almost one more week thereafter. Good riddance finally for the entire family, we hope and by May 16, I could take to my mike again to participate in a live virtual singing performance happening luckily for senior citizens just around that time.

Families together can fight such catastrophic times much better and no nursing staff can replace a loving son’s or daughter’s personal touch and care in such trying times!