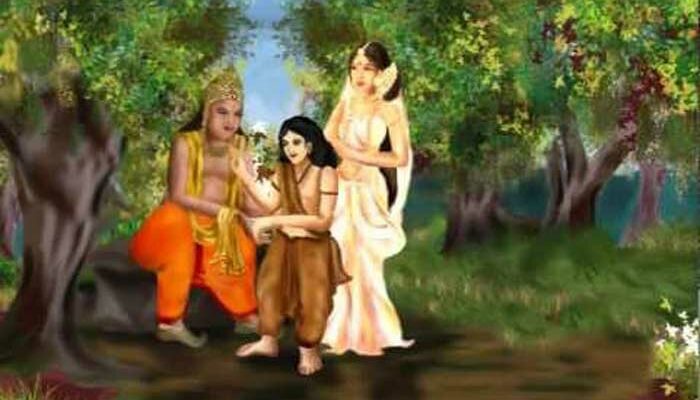 An introduction to Indian Shakespeare, born more than 2000 years ago.

If Sanskrit were the lingua franca, Kalidas today would have been the most popular poet and playwright in the world. Unfortunately, due to lack of Sanskrit knowledge in India and abroad, he is known only to a small percentage of people. He was such a popular and versatile writer that over the centuries, it is said that many subsequent Sanskrit writers adopted his name to gain popularity. 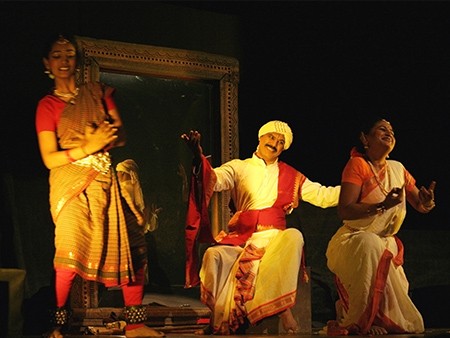 In the ancient times, Sanskrit used to be the language of conversation and discussions amongst the elite. The 8th century great scholar and Hindu philosopher Mandan Mishra had so frequent discussions in Sanskrit about the Indian scriptures that even the parrots in his garden used to talk in Sanskrit. The decline of Sanskrit in this materialistic world was quite obviously due to its inability to provide good job opportunities. Both my father and father-in-law were great Sanskrit scholars but I was told by my father to become a doctor to help alleviate the miseries of millions of poor ailing people including himself.

Kalidas was a great classical Sanskrit writer. He was known as the greatest poet and dramatist in Sanskrit language in India. Kalidas had great imaginative powers and knowledge about the natural behaviour of humans, animals and even plants. This is clearly reflected in his various mega poems and plays he has written. His most popular play Abhigyan Shakuntalam has been translated in various international languages. The other popular mega poems are Ritusanhar, Meghdoot, Kumarsambhav and Raghuvansh. Though they are all in Sanskrit, they have been translated into various Indian languages. However, the translated ones sometimes do not convey the exact meaning and lose some of their charm (as explained later in a scene in Abhigyan Shakuntalam).

After reading few of his mega poems, I felt that he is no doubt a great poet, dramatist, philosopher and an outstanding Sanskrit scholar and his writings are so good and versatile that they can be easily compared to those of William Shakespeare. However, some of his writings have some degree of mysticism and are difficult to understand in spite of your having profound knowledge of Sanskrit. In case you cannot make out anything, just remember what the Jain Teerthankar and Sanskrit scholar Mullinath said about the writings of Kalidas. He said, “only three people can understand the real meaning of his writings: Lord Brahama, Godess Saraswati and Kalidas himself”.

There is a lot of controversy about his early childhood and place of abode. However, most believe that he was a courtier of king Vikramaditya of Ujjayini. That means he lived in the Vikram era which is 57 years older than the Christian era. He was supposed to be an ignorant person till he deceitfully got married to a highly educated lady called Vidyotama. After a shock treatment by his wife, who threw him out of the house, he diverted all his energies towards getting educated and became a world renowned poet and playwright.

An Overview Of ‘Abhigyan Shakuntalam’ 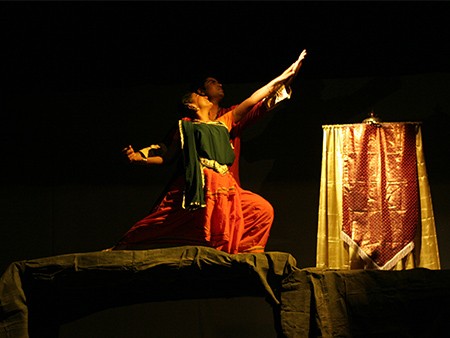 This is a beautiful stage play depicting the love story of a king called Dushyant and a jungle beauty called Shakuntala. She was an illegitimate daughter of King Vishwamitra abandoned in the jungle by her mother Menka. She was taken care of by a bird called Shakun till she was picked up Rishi Kanva, who gave her shelter in his ashram and brought her up as his own daughter. Kanva called her Shakuntala after Shakun, the birds who initially took care of her in the jungle.

King Dushyant met Shakuntala in the jungle during one of his hunting expeditions and got married by the Gandharva method. A Gandharva marriage is one of the eight classical types of Hindu marriages. This ancient marriage tradition was based on mutual attraction between two people with no rituals, witnesses or family participation. Due to a curse, the king forgot about this marriage and Shakuntala was forced to live in the jungle as an unwed mother in the ashram of Kashyap Rishi with the king’s son called Sarvadaman. He was also called Bharat and that’s how our country came to be known as Bharat.

Sarvadaman was brought up in the jungle atmosphere in the company of wild animals. King Dushyant regained his memory after seeing the wedding ring recovered from a fish’s stomach, which Shakuntala, had lost while bathing in the river. He then apologized to Shakuntala making it a happy ending. 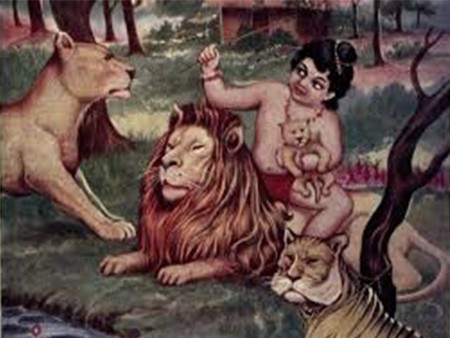 Kalidasa has beautifully described the serene atmosphere of the ashram, where the humans, the animals and the birds lived fearlessly in an atmosphere of non-violence (ahinsa).

It is a popular stage play not only in our country, but also abroad. How translation spoils the show is shown in the following scene where young Sarvadaman escapes the eye of the baby sitter and is seen running towards a lioness feeding her cubs. How craftily the baby sitter manages to call Sarvadaman back from where he was, barely a few feet away from the lioness.

The baby sitter at that moment happened to carry in her hand a clay Shakun bird toy. This is what Kalidas made her say:

(Sarvadaman, look at the beauty of this bird). 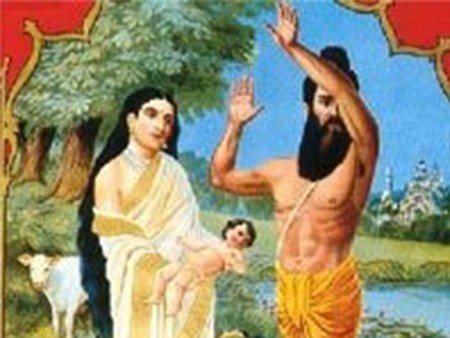 So he said: Kutra va mum mata? (where is my mother?) and came running to the baby sitter

So, now if you only read the English translation of the dialogue, why Sarvadaman should remember his mother, after hearing “look at the beauty of this bird” from his baby sitter.

The dialogue also shows the child psychology knowledge of Kalidas. In that situation what you would have done? Instinctively, you would have shouted “Sarvadaman don’t go further, come back, the lioness will kill you” But we all know that a child at that age does not have this type of understanding and will do just the opposite. So, Kalidas got the child confused by showing him a toy of the Shakun bird, which his mother was named after.

In another scene, Sarvadaman is shown playing with a lion cub, which he has pulled out forcibly while it was being breastfed. The cub is half fed and the milk trickling out from its mouth during forcible traction has made its mustache stiff.

If you have some knowledge of Sanskrit, you may be able to appreciate the apt description of this scene by Kalidas in this couplet:

In another scene, Kalidas employs the child psychology of Sarvadaman, when he asks a lion to yawn so that he can count his teeth:

How beautifully Kalidas has described the feelings of the birds, animals and plants when Shakuntala was leaving the ashram to join king Dushyant, can only be enjoyed by reading the original script. 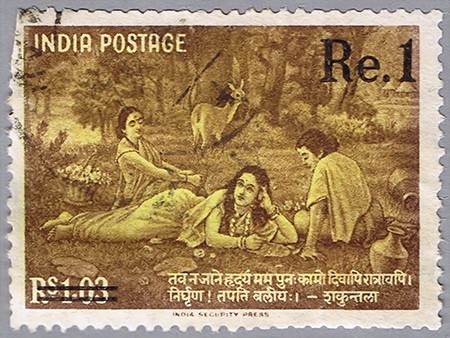 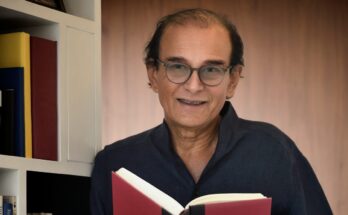 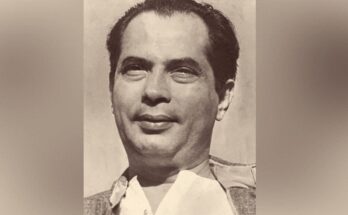 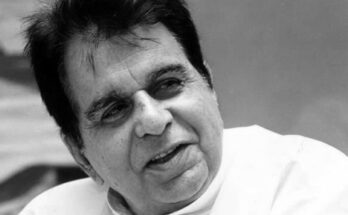 Dr Durga Dutt Gaur was born and brought up in a small town in Rajasthan, and became a renowned urologist and surgeon. He has received several international awards, chief being the Hunterian Professorship from the Royal College of Surgeons, England.

3 Comments on “Kalidas: The Brilliant Star of Sanskrit”