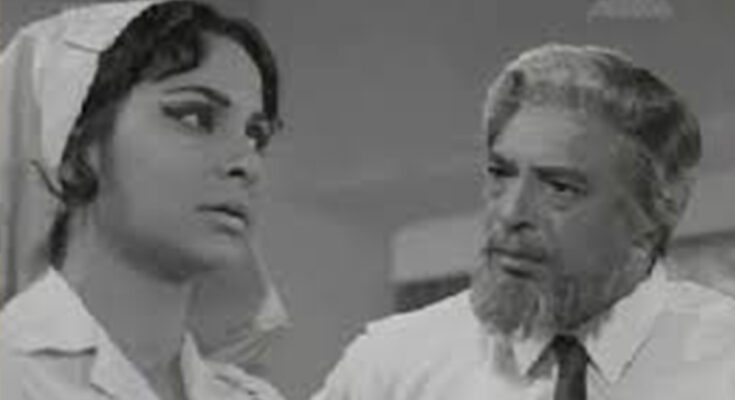 Mental health was generally uni-dimensional in films of bygone days, with the iconic Khamoshi being an exception, writes Deepa Gahlot

The suicide of actor Sushant Singh Rajput has put a spotlight on mental health. In our films of the past, if at all a mentally disturbed character was included, he or she was simply labelled “pagal” (mad). Now we know there are several kinds of ailments of the mind, and have, hopefully, begun to view people who are depressed, anxious, post-traumatic or bipolar with more understanding.

A rare film that dealt with a mentally ill patient with sensitivity was Asit Sen’s Khamoshi (1970), based on the Bengali short story Nurse Mitra by Bengali writer Ashutosh Mukherjee, which the director had already made in Bengali as Deep Jwele Jaai (1959), starring Suchitra Sen and Basanta Choudhury in the roles played by Waheeda Rehman and Rajesh Khanna in the Hindi remake.

Radha (Waheeda Rehman) participated in some experimental therapy that her boss, Colonel-Doctor (Nazir Hussain) tried out on a patient called Dev (Dharmendra in a guest role, in which his back is seen more than his face) at the mental hospital that he runs. She fell in love with him, but when he was cured, he left without a second glance, and the nurse saw him go, holding her emotions in check and expressing her feelings only in her diary.

The Colonel is pleased with the success of the therapy and asks Radha to try it out again with another patient, who has just been brought in – a writer, Arun (Rajesh Khanna). She refuses, saying “Takleef hoti hai” and a man in charge of the fragile patients in his care is callous enough to wonder why it is so tough to do some “acting”!

When another nurse is unable to reach out to Arun, who lost his mental balance when his girlfriend (Snehlata) jilted him, Radha is compelled to take on the case. Putting her own anguish aside, Radha looks after Arun and with her tender care, he starts to improve, but also falls in love with her. She is, however, unable to get Dev out of mind. The emotional turmoil is too much for Radha, and she ends up a mental wreck. “I was not acting, I cannot act,” she weeps to the now contrite Colonel. Arun cannot believe that she had been acting all along and when he sees the state she is in, he leaves promising to wait for her.

The tragic story of a woman who loves with self-destructive intensity was meant for a great actress and won awards for Waheeda Rehman, Suchitra Sen, and also Savitri who played the part in G Ramineedu’s Telugu remake, Chivaraku Migiledi (1960). Waheeda looked heartbreakingly lovely in Khamoshi, shot in luminous black-and-white by Kamal Bose. Today, perhaps the director would have asked to reduce her heavy eye make-up, but back then, nobody demanded total realism. Rajesh Khanna was well on his way to superstardom when this film released, and his recognisable mannerisms were already in place, as was the guru kurta that came to be associated with him.

The highlight of Khamoshi was the goosebumps-inducing music by Hemant Kumar (who also produced the film), with lyrics (and dialogue) by Gulzar. Songs like Tum Pukaar Lo, Woh Shaam Kuch Ajeeb Thi, and Humne Dekhi Hain Un Aankhon Ki Mehekti Khushboo would be at the top of any Hemant Kumar playlist.