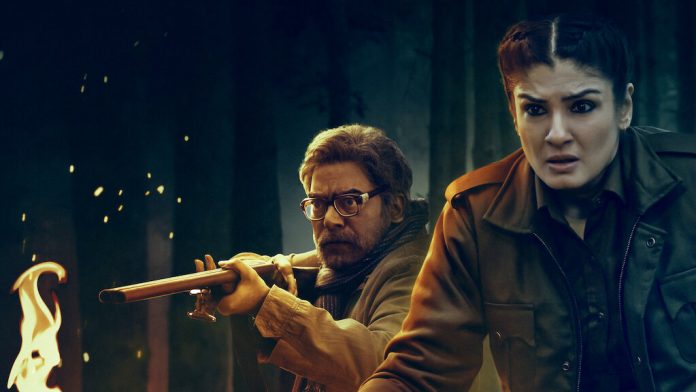 Raveena Tandon is the star attraction of Aranyak, the glamorous actress, who took a long sabbatical (nobody really retires these days), returns in this OTT series, set in a remote town of Sironah in Himachal Pradesh. In this series, directed by Vinay Waikul, she plays a cop called Kasturi Dogra, who has taken a year off from work to pay some attention to her two kids and repair her strained marriage. The remaining member of the dysfunctional household is her father-in-law Mahadev (Ashutosh Rana), a former cop with borderline dementia, and the unfulfilled wish to catch the local legend—a half human-half  leopard, Nar Tentuva.

The cold, spooky place with its rampant drug trafficking, predatory males and crooked politicians would remind the viewer of recent OTT series Candy, which also had a female cop (played by Richa Chadha) at the helm. Tandon’s obvious inspiration though is Kate Winslet, the unsmiling, troubled cop in Mare Of Easttown.

Sparks fly between Kasturi and the new incumbent, Angad Malik (Parambrata Chatterjee), who has come to take charge. He brings with him his tragic backstory and city ways, while Kasturi is more familiar with the problems of her town – that includes foreigners bringing in the drug culture and wrecking the serenity of the hill station. But when a French girl goes missing and is later found raped and killed, Kasturi and Angad are forced to work together. The plot tackles Kasturi’s domestic problems, but not so much the misogyny a woman cop would face in a small place. Aranyak, in fact, creates another female power centre in politician Jagdamba (Meghna Malik), who is admired for her work, but in private copes with a spoilt son, on parole from jail for a rape case. He is already swaggering around with arrogance, expecting his mother to make the problem go away.

The town has memories of the mythical beast that had, some years earlier, caused havoc in Sironah with a string of murders of young women. Mahadev believes the monster has come back and this time he wants to capture him.

Around them is the toxic atmosphere of greed and ambition, fanned by Jagdamba’s rival Manhas (Zakir Hussain), who wants to build a resort in Sironah and get an election ticket for his son-in-law.

The murder of the French girl turns the town upside down, and many of the boys seem to be involved.  The blunders of the district collector’s son and Kasturi’s daughter open up routes for blackmail and intimidation.

In spite of the many characters—some of them extraneous to the plot—the suspense is maintained till the end, and the unveiling of the culprit and his reason for committing the crimes does come as a surprise. Like all current OTT shows, this one too ends its eight-episode run with the possibility of a sequel.

Aranyak may not  be exceptional, but it is shot well, has an earnest cast, and enough masala to keep the viewer curious about what happens next.