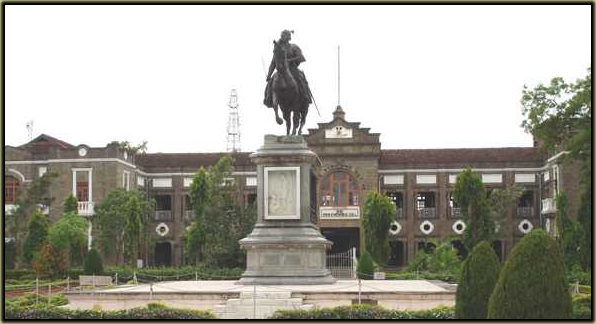 SSPMS is an acronym that stands for Shri Shivaji Preparatory Military School, a school whose cadre of students are nonpareil.

On a cold Tuesday morning, skies dark with the onslaught of gulf winds and a furious rainstorm we drove to the Veterans Memorial. We walked towards the canopy thronged by several people from near and far who had come to pay their respects. Just then, as if by miracle, the skies cleared and the sonorous voice of a United States naval officer reverberated  “It is our privilege to honor in posterity, one of our very own Lieutenant Commander Dipak Vijaykumar Desai who gave twenty years of honorable service to the US navy in the Corps of Engineers and was deployed twice both during the Gulf War and the aftermath of 9/11….”  The honours continued and I slipped into a reverie.

I was filling in the blanks with a silent eulogy of my own.  How do I let this congregation know that the foundation of this hero began some 10,000 miles away at a school that upheld virtues via discipline, valour, patience, sense of devotion and service to Nation. The founders of the All India Shri Shivaji Memorial Society (1917) were the rulers of Kolhapur, Gwalior, Baroda and Indore and the school was established in 1932 under the auspices of Rajaram III, the Maharaja of Kolhapur. How do I let the naval commanders present at this ceremony know that this was a school like none other because the values instilled in their students were those of warriors whose historical significance is carved in the annals of how India got its freedom.

As the Taps began to play and all attendees in uniform stood up to salute, I remembered the day I attended the annual parade on the pristine grounds of SSPMS.  I watched in awe as the boys marched in winter white, emblems shining, and the Head Prefect and Prefect carried the school flag and the national flag flanking Principal Khanolkar (referred to as ‘Princey’ in the frat houses). It was but expected that this flag bearer would March forth towards achievements like all IIT Swim Championship and Gold medalist. Or, move to the USA and patent ‘how to grow onions in unsuitable conditions.’ Moreover, when joining the US Navy, insisting on adding a clause that he would not raise arms against his country of India.

Two naval recruits folded the US flag – an honorable bequeathment when one of their own departs and I visualised the SSPMS numerals he so painstakingly polished every night and wished they could be sewn onto that flag along with the tricolour. And, when the Star Spangled Banner was sung in unison, I mouthed the words to the school song which was very much our anthem too!  Such was the omnipresence of this institution during our child and young adulthood.

How could it not?  Because this charming, witty, audacious, chivalrous, protective being with a heroic aura of all things steadfast besides being an eternal legacy to this prestigious institution also happened to be my brother. Let us raise a cup to this SSPMite and bid him his last march with Tagore’s famous song : ‘Jodi tor dak shune keu na ase tobe ekla cholo re …’