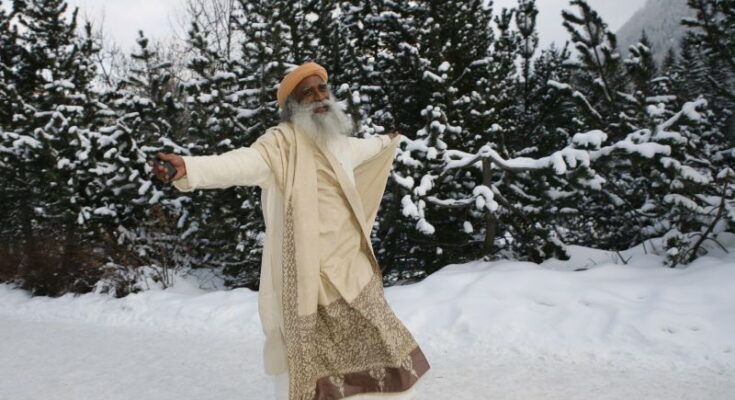 What I like about Sadhguru Jaggi Vasudev is his sense of humour, while his shawls and headgear take second precedence along with the sit-down comedy shows.

Now that I have your attention – no abusive language please in the court of ‘to each his own.’  Across both the Pacific and Atlantic and the 1,000 lakes that cross-country USA, I can hear gritting teeth, see red bulging eyes and fists prepared to take me on. Well, give me your best, I have broad shoulders and the only thing that matters to me is Sadhguru’s (SG for short) take on my philosophy.

One summery day, I headed out to Austin (approx 165.3 miles from Houston, TX) with family who are avid SG disciples. They had an extra ticket for his seminar, and I needed a getaway.  The ride included a discourse with the intention of bringing me up to score on this century’s demi-god.  Meanwhile, all I could think of was the lovely Marriott hotel room and the delicious Italian dinner to follow.  Alas, we were running late and had to make a beeline directly to the Convention Centre.  Bunches of young techies with solemn faces, were thronging from alleys and passageways, reminding me of the soldiers in Tennyson’s Charge of the Light Brigade, except our cavaliers had notes and pens instead of bayonets. It was a full house and we had ringside seats – third row centre.  The audience around me were standing in anticipation with a belief that they would learn everything they needed to know about life in a span of the next 1.5 hrs.

I briefly remember an ocean of hands in a namaste gesture a whoosh of silence and the entry on stage of a sage like person sporting a long white beard, a turban and a smile that said – really?  And I went off into snoozeland.  It was nothing he said, I was just tired.  I woke up to a rude nudge in my ribs, glares from the left, right and centre and embarrassed I wondered if I had been snoring.  But when I asked, I was shushed. I looked up at the stage and saw SG’s piercing eyes directly looking into mine saying – “I would have done the same” with the typical twist to his lips and the famous wry smile.

I felt like I had made a connection that day.  I started watching the videos that inadvertently encroached my social media sites.  And, I don’t know about you readers and some of you SG fans, but the one message that I get consistently from him regardless of what question is asked of him is: “For God’s sake get a spine. Stop leaning on somebody to get all your answers when they are really within you. His exasperated retorts when asked sexually explicit questions are – “dumbheads, it’s a natural phenomenon!””  What is most amusing as I continue watching his discourses is what he says with his eyes. I feel SG has his own primate language, for example:

Millennial (with folded hands and subdued voice): Sadhguruji, how do you explain this virus and how long do you think we will be in lockdown?

SG (with an inner sigh as if choosing words that would not be obviously insulting): You see, none of us know what is to be months from now but if you take the right precautions, the lockdown will end sooner than later.  (I believe, what SG (in primate lingo) really wanted to say was, “sub ch—– mar gaye, aulad chhod gaye).”

Alright, alright, for some of you who understand primate lingo, don’t get your knickers in a twist, he is an ascetic and such words would not cross his mind or lips or would they?  He is the only one who would be able to answer that and the cosmos willing, I will ask him that face to face one day.

Now, this here is my philosophy about SG’s philosophy: Live your life to the best of your ability, the only answers you should be seeking are the immediate ones like if you are a guy – will Virat Kohli score a century and will my girlfriend/ wife let me watch the match without interruption? Or, if you are the girlfriend/ wife: if the ‘bai’ does not show up he (the above mentioned boyfriend/ husband) will have to do the dishes. You see, these battles are more easily won than the wars that you wish to encumber your brain with like – what is to happen to this world, my inner self, the MVA (mahagathbandhan).  Will Priyanka Vadra’s hair ever grow past her shoulders, will I win the lottery, etc. etc.  Because the simple truth is that life will take its course no matter what, so learn to enjoy the moment and stop being so hard on yourself, and you might just find happiness.

But I implore you not to misinterpret the above and equate it with elitist sorority girl Sonam Anil Kapoor Anand Ahuja’s wisdom about life’s checks and balances. For, she is content in her belief that she was born with ultimate karma and the upper empty part of her head rattles on cheerfully believing her own bullshit.

On a final note, what is my true take on SG?  He reminds me of Uncle Fred, a PG Wodehouse character best known for his unorthodox ways of solving life’s problems in order to bring peace and harmony to an otherwise dreary day, so that he could enjoy the rest of the evening with his favorite glass of nectar. Why, why, why would I say this????? Well, isn’t SG a biker? He is happiest riding his Jawas (the Mysore-based motorbike his fav, not the Ducati) at a 100 miles an hour with the wind blowing through his hair and wisdom crowding his brain for a future he must spend solving life’s mundane problems for pseudos in order to steal a bit of peace and harmony at the end of the day? – I will cede you the glass of nectar as debatable.