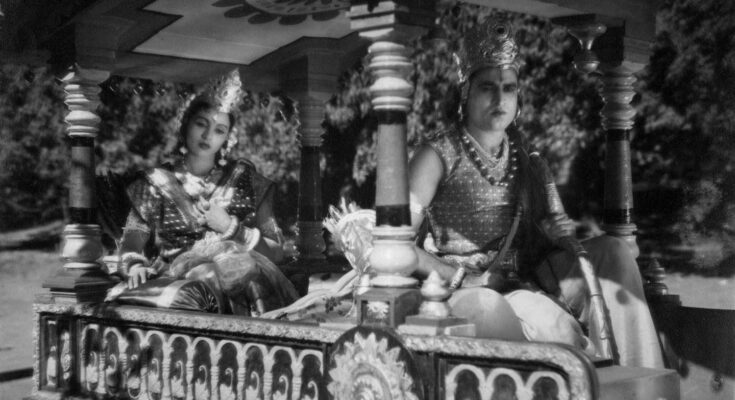 With Dussehra and Diwali just behind us, Deepa Gahlot takes a look at the legend of Ram

The Dussehra to Diwali festive season revolves around Ram and Sita and the epic Ramayan, so here’s looking at Vijay Bhatt’s 1943 film Ram Rajya, the biggest hit of its time, and one of the many mythologicals made by the filmmaker. According to movielore, it is the only Indian film Mahatma Gandhi saw, and reportedly liked.

The film starred Prem Adib and Shobhana Samarth in the lead, and picks up the story from the point when Ram returns in triumph to Ayodhya after defeating Ravan and rescuing Sita. The people of Ayodhya are overjoyed to have their king back. They are just settling into the lavish palace, and Ram is in the process of establishing a pro-people system of ruling – his Ram Rajya – when he faces a terrible dilemma.

A dhobi (VD Pandit) throws his wife (Amirbai Karnataki) out because he suspects her character. When Ram sends a courtier to order him to take his wife back and treat her with respect, the dhobi (made up to look particularly hideous) sneers at the king’s weakness in accepting a wife who spent time in another man’s house.

Word gets back to Ram, and he calls for court to decide — interestingly men from all four castes are represented in court, but seated separately. Rishi Vashistha (Pande) explains to the gathering that Sita was already made to undergo the agnipariksha before being brought back to Ayodhya, so would they still doubt her chastity?

They don’t doubt her, the men say, but expect a king to do the right thing. A wife whose pavitrata can be questioned has no place in her husband’s home. Ram is distraught at the verdict, but believes a king’s duty must be greater than his emotions and instructs Laxman (Umakant) to take Sita to the forest.

Sita is clueless about what has happened, and is not particularly disturbed when Ram refuses to see her when she sets out on the journey. When they reach the forest and Laxman tells her that she has been cast off by Ram, she is devastated. Some impressive special effects for the time show volcanoes erupting to indicate her state of mind.

After sending a grief-stricken Laxman on his way, she seeks shelter with Rishi Valmiki (G Badri Prasad).He sympathises with her but also admires Ram for proving to be a true Maryada Purushottam.

Sita takes on the name of Vandevi, so nobody in the ashram knows who she really is. She gives birth to twins, Luv (Yashwant) and Kush (Madhusudan), who grow up without knowing about their father’s true identity, and are cruelly taunted for this by the other kids. Rishi Valmiki, who has written the Ramayan by then, teaches the boys warfare and also the story of Ram’s celebrated victory over evil.

Back in Ayodhya, Ram punishes himself by living the life of an ascetic, eating simple food sleeping on the floor. When it’s time for him to prove his supremacy over other kings and perform the Ashwamedha yagna, which requires a wife to be present, he refuses to remarry and places a statue of Sita by his side. This yagya is an empire-building one, under which a horse is let loose, the kingdoms that let the horse pass accept Ram’s dominion; if anyone stops the horse, it is taken as a declaration of war with Ram, and who would be foolish enough to risk that?

katha sunate hain) , but when they hear that Ram abandoned his innocent wife, they leave in a huff. By this time, the people of Ayodhya repent their error and want their king to be reunited with his queen.

When the horse reaches their home in Dandkaranya forest, Luv-Kush stop it and take on Ram’s mighty army. Again, the special effects were extraordinary in those pre-CGI times, as arrows fly, fires rage, lighting strikes and rain lashes the battlefield. When Laxman is injured, Ram rides out himself, to see who is fighting his men, and is astonished to see two teens enjoying their exploits. Sita hears that a confrontation between her husband and her sons is imminent, and rushes to stop it. Ram is elated to find that the brave boys are his sons and offers to take Sita back, but the earth opens up and she descends into its depths. In many retellings of the Ramayan, when Ram’s abandonment of Sita is extolled as the noble act of a just king, there was no question of her expressing any displeasure at the way she was treated. She disappeared silently.

Subsequently, there have been reworkings of Valmiki’s Ramayan from Sita’s point of view, but Vijay Bhatt’s film was faithful to the epic (written for the screen by Vishnupant Aundhkar) that was meant to be a saga of Ram’s valour and divinity. Seen today, one can only admire the craft that went into the making of the film. Kanu Desai’s magnificent (if kitschy) palace sets with their intricate carvings and statues, Zaver Solanki’s costume design and Shanker Rao Vyas’s music

Shobhana Samarth’s daughters Nutan and Tanuja, and granddaughter Kajol, went on to become major movie stars. Prem Adib had a successful career, cut short by his death of a brain haemorrhage when he was just 42. Their films as Ram and Sita made them so popular that their faces were used to portray the idols for years in magazines, calendars and reportedly in a temple!

Vijay Bhatt was one of the pioneering filmmakers of the country, whose son Pravin and grandson Vikram followed his lead into the world of cinema. After starting his career as a writer in the silent era, he turned to production and direction, founding Prakash Pictures with his brother Shankarbhai Bhatt. His best remembered movie musical may be Baiju Bawra (1952), but his early blockbuster mythologicals remain master classes in large-scale costume dramas.