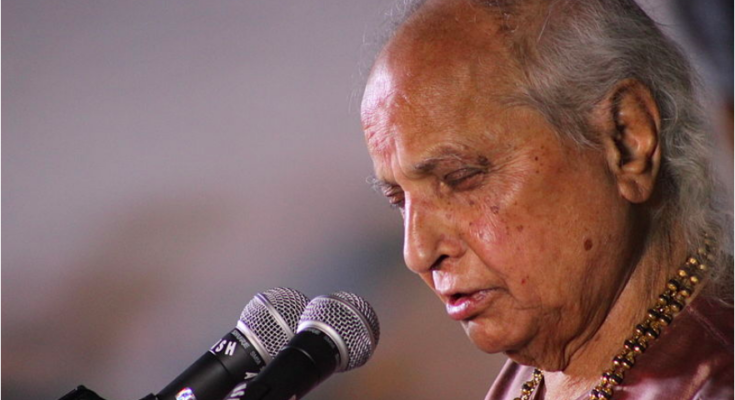 An era has ended, truly. Pandit Jasraj had a voice which expressed any emotion in any range. And even as fans worldwide are trying to come to terms with the sudden news of his passing, we bring you 10 songs picked by Narendra Kusnur that he had mastered over the years, often reciting his trademark ‘Jai Ho’ before starting them

One always remembers that gooseflesh moment towards the end of his concerts, when Pandit Jasraj would raise his hands skyward, and chant the name of the Lord in never-ending streams of musical magic. The Mewati gharana maestro, who passed away at 90 on Monday, would transport listeners to another world.
Much as he gained a huge following for his rendition of khayal, his presentation of devotional music was much admired. Be it a Krishna bhajan, a Guru Nanak shabd, Haveli Sangeet or an invocation for Goddess Kali, he left you mesmerised. And this experience wasn’t restricted to concerts, as people would buy those records to embellish their collections.
An era has ended, truly. Jasraj had a voice which expressed any emotion in any range. And even as fans worldwide are trying to come to terms with the sudden news of his passing, we bring you 10 songs that he had mastered over the years, often reciting his trademark ‘Jai Ho’ before starting them. These tunes live on.

Composed in raag Bhairav, this was a favourite at morning concerts. “Mero Allah meherbaan, koi bigaad sakat nahin tero”, he sang, often with back-up vocalists repeating the line to create a mesmerising effect.

An eternal favourite in raag Bhimpalasi, this again has Jasraj leading from the front, and his disciples singing after that. It’s rendition always gave a temple atmosphere and the audience would invariably song along on the main line.

A Hanuman stuti bhajan in raag Jog, it begins “Hanuman lalla mere pyare lalla”. The maestro had sung this at an online Hanuman Jayanti Facebook show organised earlier this year during the lockdown when he was in the US, and was perfect in its rendition.

One of his most soothing khayals set in raag Hansadhwani. “Poot Pawan tum doot Ram ke”, he sings, and the raag builds up slowly and majestically. The drut khayal “Le ja re bhadra sandeshwa” is also fascinating.

A Krishna bhajan, this one in Mishra Kafi dazzles with the line “Vraje Vasantham nabanita corum”. The ‘Krishna Krishna’ climax takes listeners into another zone.

Much requested in concerts, this madhyalaya composition in Adana is dedicated to Goddess Kali. The line “Jagat janani Bhawani Bhawani Bhawani” is steeped In devotional fervour. Both Jasraj’s solo recording and his rendition with disciple Tripti Mukherjee are popular.

This Meera bhajan in raag Bhairavi was also used in Jaidev’s  Geet Govind, composed by Jasraj in the 1970s. It’s been a concert regular ever since. “Gaya kumatda Radha sangat, Shyam preet jaga saachi”, go the lyrics.

This one is dedicated to Goddess Durga. It was composed by Jasraj’s brother, the late Pandit Maniram, and written by Maharana Jaywant Singh Vaghela of Sanand, Gujarat. It has often been requested by fans.