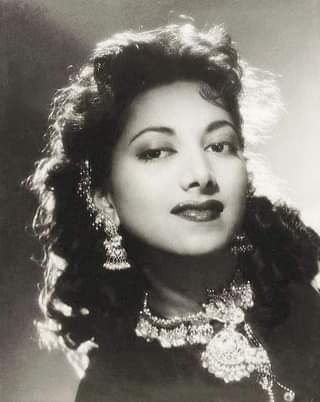 One of the singing stars of the 1940s, Suraiya had some wonderful songs to her credit. To mark her 93rd birth anniversary, we select 10 such gems.

Suraiya was also known for her relationship with Dev Anand, who she couldn’t marry because of family opposition. She cut down on films in the early 1950s, but was praised for her role in the 1954 movie Mirza Ghalib. The order here is chronological.

Suraiya sang for actress Mehtab as a 12-year-old in the 1942 film Sharda. The music director Naushad approached her again for Kanoon, and this song also picturised on Mehtab was a big hit. Interestingly, Mehtab was initially reluctant to be associated with such a young singer, but was impressed after hearing her recording. Lyrics were by D.N. Madhok.

Lyricist Shakeel Badayuni got his big break with this film, and his association with Naushad thus began. This song filmed on Suraiya was composed in raag Darbari. The film also had the hit ‘Afsana Likh Rahi Hoon’, sung by Uma Devi aka Tun Tun.

This was an unusual song as more than actual lyrics, it consisted of syllables like, “ta ra ri” and “ta ra rum pum”. Naushad composed the peppy tune, and Shakeel wrote whatever few words it had. Suraiya sang with Mohammed Rafi, and starred opposite Raj Kapoor

This song was filmed on Talat Mahmood and Suraiya in a train compartment. Music was by Anil Biswas and lyrics were by Qamar Jalalabadi. While Talat sang a large part of the song, Suraiya’s voice came in at the end.

In this film based on the life of the great Urdu poet Mirza Ghalib, Talat Mahmood and Suraiya sang one of his popular ghazals. The opening lines were, “Dil-e-nadaan tujhe hua kya hai, aakhir is dard ki dava kya hai”. Ghulam Mohammed gave the music. Suraiya appeared with Bharat Bhushan.

In the early 1950s, Suraiya was affected by competition on the singing front from Lata Mangeshkar and Geeta Dutt, and on the acting front from Nargis and Madhubala. Yet, her hit songs continue to be played over seven decades later.