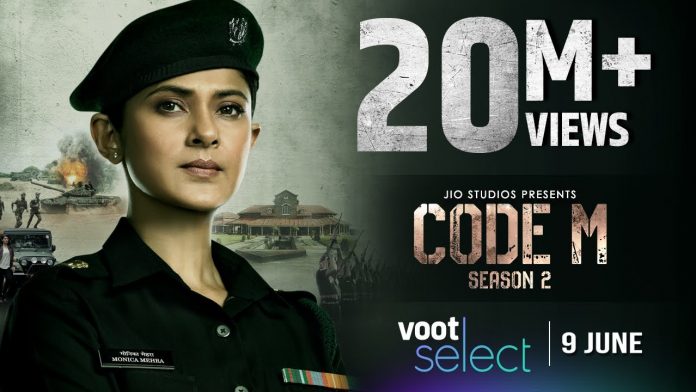 The first season of Code M, set in Jodhpur, had its protagonist battle encounter killings and homophobia in the army. It was interesting to watch a woman in a military setup, dealing with unusual situations.

In Season 2, Major Monica Mehra (Jennier Winget) has been promoted to Military Intelligence, and assigned the task of managing the security of the chief minister (Manoj Dutt), visiting the cantonment in Pune. Her vigilance foils an assassination attempt by poisoning the CM’s dessert, but the suspect commits suicide when cornered.

Monica is shocked to find that the poison was military grade (used for what, it doesn’t say), so there has to be an insider involved. But, before she can start asking too many questions, she is ordered to hand over the investigation to the CBI’s Ismail Qureshi (Swanand Kirkire), who very clearly tells her to back off. This makes her suspicious and she continues digging for leads with the help of her loyal associate Rahil Khan (Eklavya Kashyap), and her ex-flame, Angad (Tanuj Virwani).

Monica’s backstory involves the death of her father, also a military man, Vikram Mehra (Atul Kumar), in a fire, a broken romance with Angad and a marriage on the rocks. She had chosen the army over family, and her persistence in this case proves that she does not give up easily where her work is concerned. She discovers corruption at the highest level among army men, politicians, bureaucrats, and also finds a vigilante group in action.

The series, created by Ektaa and Shobha Kapoor, directed by Akshay Choubey, from a script by Aniruddha Guha, Samar Khan, Niharika Puri, Aparna Nadig) has eight episodes of a crisp 20 minutes each. So there is no flab, yet, it gives the no-nonsense heroine a little time to flirt, have a drink and play a game of chess. It is unconvincing, however, that she shares details of a top secret investigation with a civilian, even if he was a man she used to date, and who just happens to be around whenever there is a crisis.

Jennifer Winget has an attractive screen presence and amazingly good voice; she carries off the role of a military officer well, and shares an easy chemistry with Tanuj Virwani. The series ends with an angry Major Monica Mehra promising to continue the mission, so there’s a Season 3 in the offing. Code M is fast-paced, enjoyable and can be binged in a single sitting.

Entertainment Review: Only Murders In The Building Season 2