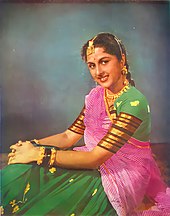 Known for both her beauty and her acting prowess, Bina Rai had hit films like Anarkali, Ghunghat and Taj Mahal. Some of her movies didn’t do well too, but she appeared in a string of melodious songs, mostly sung by Lata Mangeshkar.

To mark her 13th death anniversary on December 6, we choose 10 songs filmed on her. Some of these are rare and probably forgotten gems, but they have such beautiful tunes that one can enjoy them today. In these 10 songs, she played the heroine. There is also a 11th song mentioned at the end, where she played another role. The list is chronological.

An immortal classic sung by Lata, this featured Bina as Anarkali and Pradeep Kumar as Salim. There were two versions. C. Ramchandra composed the tune, with Rajendra Krishan writing, “Yeh zindagi usi ki hai, jo kisika ho gaya, pyaar hi mein kho gaya”. The ‘Alvida’ refrain was done brilliantly. The film was one of the biggest musical successes of the 1950s.

Once again, Lata sounded magical on this song composed by N. Dutta. It had a simple melody and good arrangements. Sahir Ludhianvi wrote, “Apne khayalon ko samjha dijiye, kyon raaton ko neend churane aate hain, churane aate hain”. It may be noted that Asha Bhosle sang the other songs in the film.

Ramchandra recorded this song with Asha Bhosle, and it was considered to be one of her sweetest songs in that phase of her career. Ashok Kumar was the co-star with Bina. The song was set in a lori style. Rajendra Krishan began, “Raat hai sitaron wali, pyaar ke nazaron wali”.

Bina won the Filmfare award for this film, in a year when everyone thought Madhubala would win it for Mughal-e-Azam. This peppy song was composed by Ravi and sung by Lata. Shakeel Badayuni wrote, “Mori cham cham baaje payaliya, aaj mile hai more saawariya”.

There was another hit song filmed on Bina, but this was as a mother in the 1966 film Daadi Maa. Roshan’s composition ‘Usko Nahin Dekha Hamne Kabhi’ was sung by Mahendra Kapoor and Manna Dey, and remains one of the most wonderful film tributes to the mother. Majrooh Sultanpuri wrote the words.