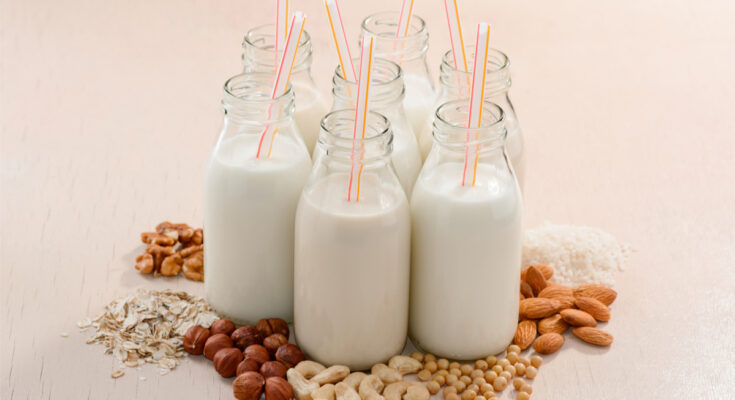 Yes, it’s official. Milk has evolved into a plant food as well.  Delving into some research, I learned about the insane varieties of milks you can get to savour.  Something for everyone, you could say.

I’m what is termed as a “milk- baby”.  I love milk. My father made sure I had a warm glass of milk and honey every night before bed – and 55 years later, it’s a habit that hasn’t left me. But more interestingly, I have had friends in recent times who pull my heart strings and pound my soul with ethical reasons and environmental concerns, on why I should give up drinking mama cow’s milk.

On occasion I do drink soy and almond milk. Cashew milk we add to kormas, and coconut milk is the hero of all our curries (well, most of them), besides when we were young we never thought of substituting regular dairy milk with a glass of any of these variants.

But the world of milk as we knew it, has morphed into a plethora of creamy concoctions as the years have passed…

Now, the definition of milk according to the Merriam Webster is:

1a: a fluid secreted by the mammary glands of females for the nourishment of their young

B (1): milk from an animal and especially a cow used as food by people

(2): a food product produced from seeds or fruit that resembles and is used similarly to cow’s milk – almond/coconut/soy/nut milk

2: a liquid resembling milk in appearance: such as

a: the latex of a plant

b: the contents of an unripe kernel of grain

So yes, it’s official. Milk has evolved into a plant food as well.

Delving into some research, I learned about the insane varieties of milks you can get to savour.  Something for everyone – you could say, so instead of crying over my spilled (cow) milk, I’ve discovered a whole new world of milks available today.

Due to allergies, lactose intolerance, veganism and vegetarianism, some people are not capable of absorbing or consuming good old regular dairy milk.

Besides, it is a well known and undeniable fact that the production and storage of animal products generate abundant greenhouse gases, so some consumers tend to avoid milk due to environmental considerations.

It is for these reasons that milk has evolved into plant milk made from soybeans, oats, nuts, etc.

Besides dairy milk, the rising popularity of non- dairy (plant-based) milk now opens up many options, some of which I’ve listed below: 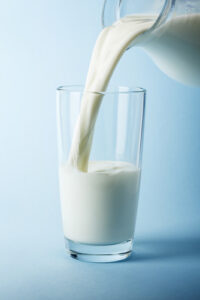 Whole milk or full cream milk is rich in taste and contains 3.25% milk fat by weight. It is higher in calories, with a 250 ml glass containing 150 calories, 8 grams of protein, 8 grams of fat, including 5 grams of saturated fat.

Weight watchers may be wary of drinking whole milk, but it is worth noting that the body needs fat to absorb vitamins A and D. 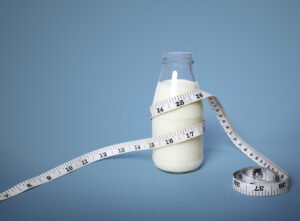 A 250 ml glass of skim milk contains just 80 calories. But worry not, as the 8 grams of protein and other essential nutrients in the milk remain intact.

Although it appears to be a healthier option, some skim milk contains some amount of flavourings/ additives. 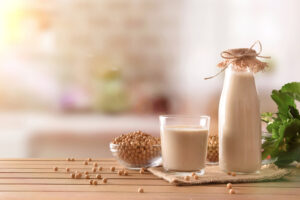 Nutritionally, soy milk comes closest to cow’s milk. Soybeans are an excellent source of complete protein and thus a great option if you wish to avoid dairy beverages.

A 250ml serving of unsweetened soy milk approximately provides 105 calories, 6 grams of protein and 4 grams of fat. It also contains vitamin B12 and D, calcium and phosphorus. 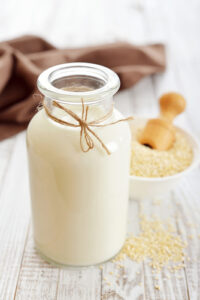 Quinoa is an excellent source of manganese which acts as a cofactor of several enzymes to facilitate a dozen different metabolic processes. 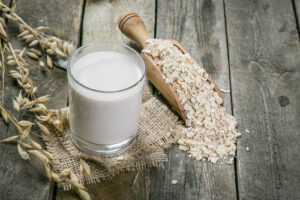 Oat milk is high in soluble fibre and beta-glucans. It is, however, lower in protein, vitamins and minerals compared to cow’s milk. 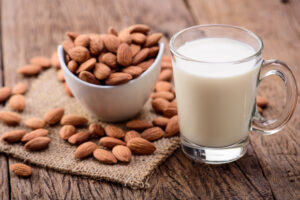 It contains vitamin E which helps to maintain the skin and eyes as well as supporting the immune system. Most varieties are also fortified with calcium and other nutrients like magnesium, selenium and vitamin D. 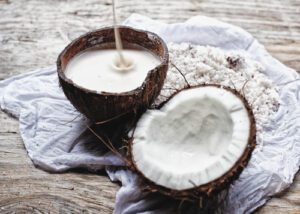 Coastal India is well acquainted with coconut milk which is made from pressed coconut flesh that has been combined with warm water. It has a rich, creamy consistency that is similar to whole cow’s milk and a noticeably coconutty flavour.

Coconut milk is a good source of several vitamins and minerals including Vitamin C, Iron and Selenium. It is high in calories and saturated fats called medium-chain triglycerides, which evidence suggests may benefit weight loss and metabolism. 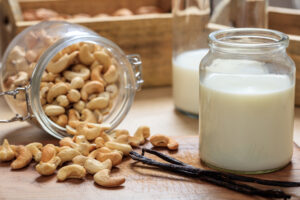 You may be used to grabbing a handful of these delicious nuts as a snack, but cashew nuts also make a rich alternative to milk. With a less nutty flavour than other nut milks, it is made from nuts rich in minerals like zinc and selenium, which play important roles in immune system function and reproduction.

On average, 100ml of cashew milk provides almost 1g of protein and around 30 calories. 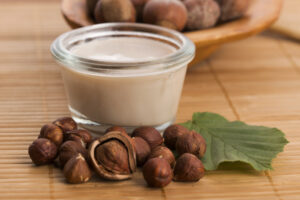 Low in saturated fat, most hazelnut milk drinks are fortified with minerals like calcium for added nutrients.

Hazelnuts are a good source of vitamin E, and research has shown that diets rich in these nuts could help improve cholesterol levels. 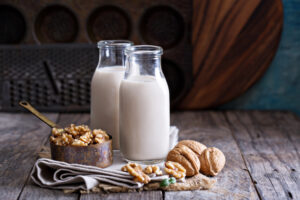 This non-dairy milk is made by blending soaked walnuts and water together, and straining the resulting liquid for a smooth beverage.

Walnuts are a source of antioxidants, omega-3 fatty acids, and fibre.

Being one of the most highly nutritious nuts, walnut milk, if made or bought from a credible source is fantastic for your health.

Nut “milk” is a dairy substitute that can be made from different types of nuts. First of all, the nuts are often toasted after their shells are removed. After soaking in water, they are crushed into a paste and blended with water. The liquid that is strained from this mixture is the nut milk. In some cases, flavouring, thickeners, sugar or salt are added. Pre- soaked macadamia nuts are blended with water. The nut being incredibly sweet and deliciously rich, macadamia milk has an equally rich, smooth texture, almost fruity flavour, and serves as a creamy substitute for cow’s milk.

Since macadamia trees are difficult to grow, the nuts are rarer than other types of nuts, making them more expensive.

If you are lucky enough to get some, macadamia milk is a great option for baking or as a standalone beverage. Pistachio milk is a tasty, green vegan milk derived from soaked and blended pistachios. Draining the mixture through a cheesecloth or nut milk bag can result in a smoother texture.

Once transformed into a smooth milk, pistachios don’t pack quite the same punch as they do in nut form.

A one-cup, 50-calorie glass, for example, contains only 1g fiber and 2g protein — a third of what you’d get in a serving of raw nuts — and the calcium in the drink will cover just 2 percent of your RDA. 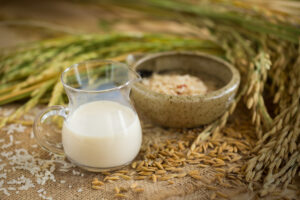 Allow the rice to cool.

Combine the cooked rice with about 2 cups of water in a high-speed blender. Many cooks add a small amount of salt to enhance flavour. But others choose to add vanilla, cinnamon, or dates.

Blend the mixture until smooth, then strain through cheesecloth or another type of fine strainer.

Place the milk in an airtight container and place in the refrigerator for up to five days.

Remember that rice milk that you make at home will not provide the nutrients available in enriched rice milk that you buy in stores. Also rice milk does not naturally contain calcium and Vitamin D like dairy milk does, though it is lower in saturated fat. For this reason choosing commercially made rice milk may be a better bet.

When it is made commercially, usually it is made using brown rice, brown rice syrup, plant-based oils, and sweeteners or flavourings such as vanilla. Rice milk may also be fortified with micro nutrients, such as vitamin B 12, calcium, or vitamin D.

How to use non-dairy milks

Most non- dairy milks ( plant and nut based) are great as additions to puddings,  desserts, cakes, smoothies, hot chocolate, cold or hot coffee, cereal mixes, gelatos, ice- creams and in India they give a mouth-watering twist to our curries.

Of course you can enjoy a glass of milk just on its own. A couple of noteworthy findings:

That does it for the low-down on milk in the 21st century. I haven’t mentioned many more like hemp milk and so forth. It seems as though anything and everything can be turned into milk with the wave of a mystical milk wand. Whether it suits your health, palate, wallet, and sensibilities is ultimately your decision; but there is no denying that the new world of milk has revolutionised the way we will henceforth look at our regular cup of “doodh.” A Few Tips on Post-Vaccine Protocols