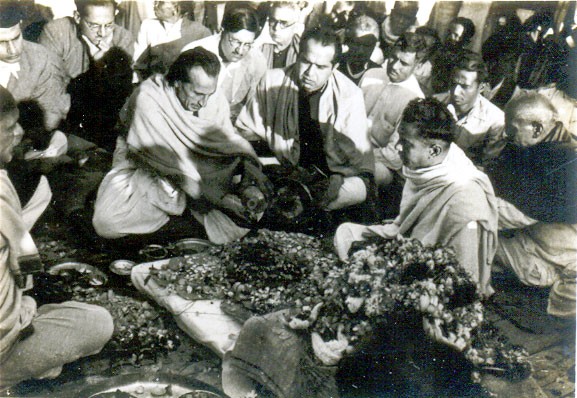 The untold story of an unsung hero, Bhai Pratap – my father and builder of the new Sindh in India. 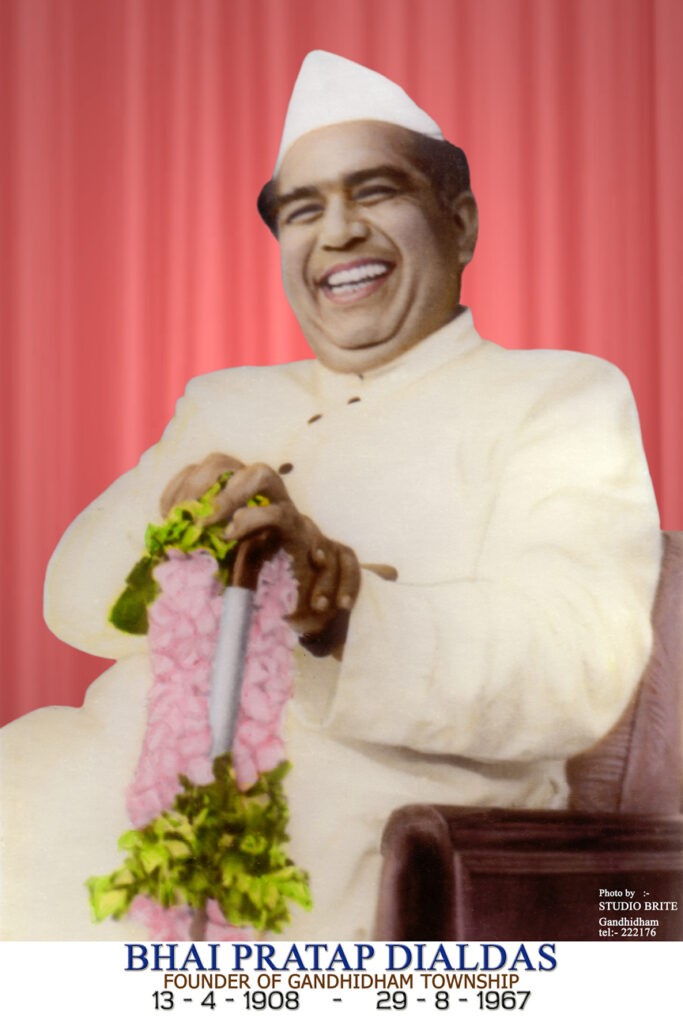 Pratap Mulchand Dialdas (fondly known as “Bhai Pratap”) was a most prominent Sindhi businessman of Hyderabad, Sindh and a dedicated Gandhian, in pre- and post-partitioned India – the historic times of the struggle for independence from colonial rule.

Funds flowed from his firm M. Dialdas & Sons freely towards the Movement and he was one of Sindh’s main contributors financially as also in other underground activities – helping and housing those involved. In the Quit India Movement of 1942, he secretly stamped one rupee notes with ‘Quit India’ and distributed them to the public.

As the spectre of a divided nation loomed over British India before August 1947, (when both Pakistan and our country went their separate ways), the Sindhi community was faced with the dark despair of losing their ancient homeland–when Sindh wholly assigned to Pakistan. This in spite of the fact that they had fought valiantly in the freedom movement, shoulder to shoulder with every other Indian, for Independence.

The communal carnage that ensued during this struggle was terrible in its intensity. Gandhiji now turned to his loyal supporters – including PratapDialdas and other Sindhi political leaders for help to assuage the flames that now were engulfing the riot torn district. He pleaded with them to rehabilitate the Sindhis – turned overnight into refugees in their own country…

It was Bhai Pratap who took up the Mahatma’s clarion call – beyond the call of duty, so to speak. He gave up his vast global business empires, his life of luxury and leisure, to build the townships of Adipur, Gandhidham, Kandla and Kandla Port, in Kutch, under the aegis of the Sindhu Resettlement Corporation formed by him for the purpose. He reached out to his mentor, guru and guide, to rewrite the New Sindh in India.

As the stream of countless refugees came pouring in over the borders, father’s vision looked to the future – to provide permanent solutions to the misery he witnessed all around. For the New Sindh in India he dreamt of a new port like Karachi; of a region the oustees of Sindh could call their own; of business enterprise; of trade; of commerce; of prosperity that had been theirs not long before.

With Gandhiji’s help and blessings the Maharao of Kutch granted Pratap Dialdas vast acres of land alongside miles of unspoilt coastline – to build the tri-city – Gandhidham, Adipur and Kandla – as well as Kandla Port, which has become today India’s premier port and vies with the best in the world. Not many are aware that a small jetty port build by the Maharao’s ancestor Khengarji III, in 1930s was developed into a major port by Bhai Pratap –to replicate and outdo the Karachi port lost to India, at Partition.

Unfortunately the sufferings of the migrant Sindhi population didn’t end with their entry into independent India –where they were treated as refugees and denied residency and citizenship. It’s only when Sindhi stalwarts like Choitram Gidwani and the young firebrand lawyer Ram Jethmalani fought the new government to get the draconian Refugees Act nullified, that the Sindhis got full rights of citizenship in India. 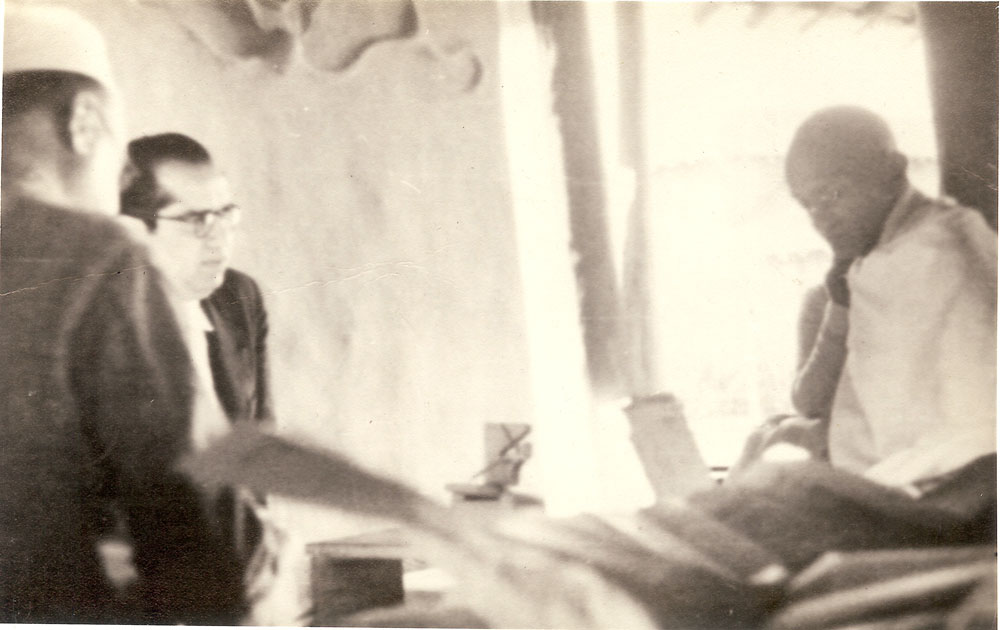 Bhai Pratap started the work on the New Sindh soon after partition. On 30 January 1948, Gandhiji received a telegram from Father saying the work on the tri-city and port was ready to begin on the vast desert scrublands and coastlines of Kutch. Bapu was overjoyed and assured his friend that he would come to Kutch soon. But destiny had other plans…The Mahatma was struck down by an assassin’s bullet and killed on the same fateful day. Father was shell-shocked, struck dumb so to speak.

He attended the funeral dry-eyed and collected the ashes of Gandhiji to bring them to Kutch. After the 12-day mourning period was over, he began work on the task of building the tri-city, hence 12 February 1948 is celebrated as Gandhidham day. Few people know what a beautiful Gandhi Samadhi exists in the township here, apart from the one in Delhi – on it, Gandhiji’s last words are inscribed – ‘Hey Ram’.

The inception of the work also saw the birth of the Sindhu Resettlement Corporation (SRC) – the company founded by father for the resettlement of refugees and the construction of the new Sindh. ‘Sindhu’ is the Sanskrit name of the River Indus in Pakistan and was meant to cover restitution and rehabilitation of the region as a whole and not only for the Hindu Sindhis. To date, the SRC continues to do yeoman’s service to the peoples of Adipur, Gandhidham and Kandla, over 70 years since it was formed in 1948.

Pandit Nehru inaugurated the port construction work in 1952 and Bhai Pratap read a detailed report to him of the enormous amount of work done here and in the townships in a matter of just under four years… Panditji applauded the fact that the tri-city was ready to move into and was bursting with human activity, hope, job opportunities and more. The townships and port were the first planned ones of free India – even before Chandigarh. Senior Advocate Anil Harish had pointed this out in a budget speech a few years ago. A free trade zone built adjacent to the Kandla port is still the only one of its kind in the country.

Soon to follow were the bus services, railway lines connecting the port and the mainland, Kandla aerodrome – because father knew that all modes of transport – land, sea and air were essential factors of a growing city which could attract global initiatives in business and enterprise. He invited a variety of merchant communities to revive the colossal commercial activity that used to take place in Sindh – to bring in prosperity and wealth now into the new Sindh in India instead.

But his long-term dreams were soon shattered ….we were on a rare holiday together in Darjeeling where father was looking to buy some properties, when we got news that he had lost a case at the lower courts of a fraudulent charge against him of misusing import licences, which he had been battling for some time. Soon, he lost in the high courts as well and the ignominious sentence was increased from 18 months to 5 years – the last straw being that the Supreme Court rejected his appeal against the high court order. The fates were somehow against him at every step he took….He found himself in the depths of despair and with him, my mother and I suffered inconsolably.

Funds were down, as well as fortune, health and the future planning of the tri-city in disarray. But God was on Father’s side, and suddenly there seemed to be a light at the end of the tunnel. The UP Advocate General K L Mishra took up the case pro bono as he realised that Father was a victim of deep conspiracy and also could not afford high lawyer’s fees any more. Needless to say, Mr Mishra had the whole case reviewed and re-appraised, and the Government of Maharashtra created legal history by granting Bhai Pratap an honourable pardon of all legal charges against him. Senior Monk Swami Ranganathan of the Ramakrishna Mission, Father’s friend from Karachi days, had also made a mercy petition for him. But the drama and politics continued. Father’s health took a turn for the worse and he convalesced between hospital and home for some time.

Just before the honourable pardon was due to be announced, it suddenly got entangled in and delayed because of the famous (or infamous) Nanavati case, which rocked the city from the late 1950s and has been made into several Bollywood films – like Rustom in 2016, and earlier ‘Ye Raste Hain Pyar Ke’. Now a new film is due to be released called The Verdict, which is the story of the famous Karl Khandalawala, Nanavati’s lawyer. This film also portrays Bhai Pratap’s role in the matter.

There are some scars one must bear for life. In the late ’50s, a Parsi Naval Commander Kawas Maneckshaw Nanavati discovered that his wife was having an affair with Prem Ahuja, his Sindhi friend of 15 years. Nanavati shot him dead and gave himself up to the Bombay Police. Pandemonium ensued – the print media unleashed a blitzkrieg of propaganda in the handsome commander’s favour, even saying that he had done a righteous thing because he loved his wife, and named Prem Ahuja the villain of the piece.

The case rocked Bombay city with unprecedented drama and glamour. Street vendors even sold ‘Nanavati guns’ and ‘Ahuja towels’! It became a clash of two communities – Parsi and Sindhi. Although Bhai Pratap was the first to get an Honourable Pardon from the Government of India, it was delayed to coincide with Nanavati’s pardon so that both Parsis and Sindhis could be mollified at the same time. Ram Jethmalani played a stellar role in making Father’s as well as Nanavati’s pardon actually materialise. But he made it very clear – Bhai Pratap was an innocent man, unjustly accused and then honourably acquitted, but Nanavati was a self-proclaimed criminal who spent several years in jail before getting his freedom. 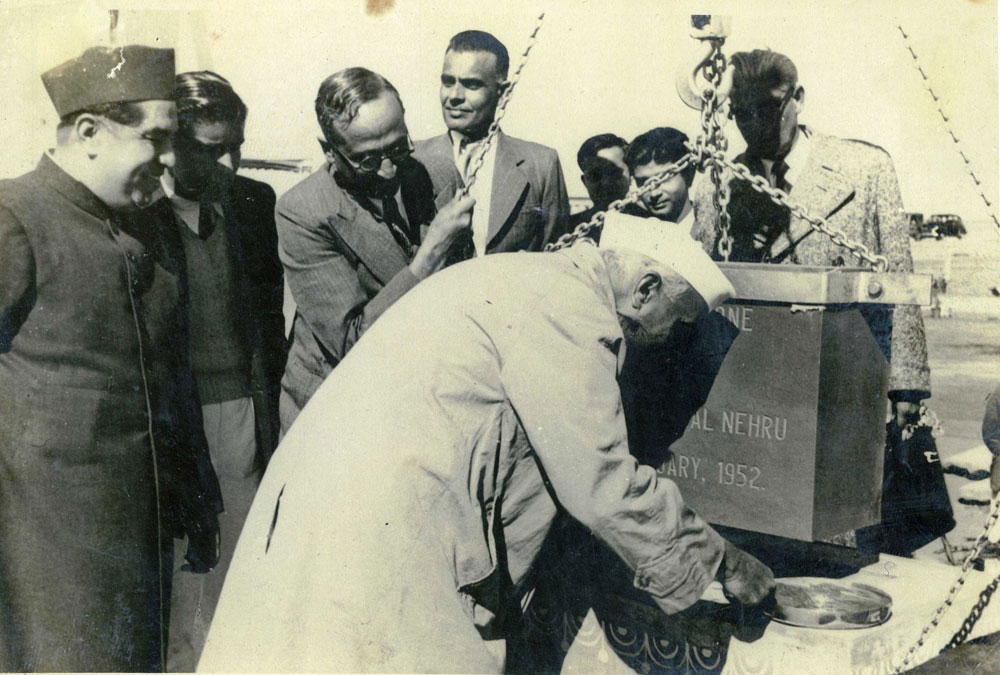 “Bhai’s pardon was superior – it wholly destroyed the stigma of guilt and conferred the reward of total innocence on him. Nanavati was shown mercy on the basis of Mamie Ahuja’s reference to the guilt of her brother being an exonerating factor for him”.

It has been widely quoted today, that Bhai Pratap was not given enough recognition for the stellar work done by him straight after Partition, in the building of the tri-city and port. He had also worked tirelessly for the freedom struggle in Sindh and in independent India for the migrants of West Pakistan. But when he needed help to fight the fraudulent corruption case against him no one came forward to help him – high-powered leaders (like Rajendra Prasad, Jawaharlal Nehru, and others) were too busy in the politics of new India, forgetting the paramount role father played in funding them and giving them shelter and resources during the struggle.

Senior journalist Bachi Karkaria, writing in Ahmedabad Mirror, has called Bhai Pratap “Kandla’s Unsung Hero”, who has been given little or no recognition for building Kandla Port which has now been renamed as Deen Dayal Port. She has said, “Today the port is one of the richest in the country and part of a special economic zone – the first of its kind in Asia. However, there’s hardly any acknowledgment that this was due to Bhai Pratap’s vision.”

Aruna Jagtiani
Born in Sindh just before Partition, Aruna Jagtiani has worked with Indian Express, Orient Longman, and All India Radio. She now chairs the Board of the Sindhu Resettlement Corporation.