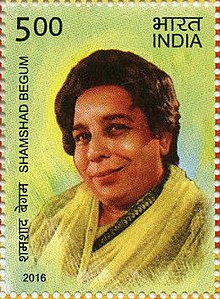 With her distinct voice and strong sense of melody, Shamshad Begum was one of the most popular singers of the 1950s. However she didn’t have as many songs as her contemporaries Lata Mangeshkar, Geeta Dutt and Asha Bhosle, and often sang for the side actresses.

While April 14 marked Shamshad’s 103rd birthday, April 23 will be her ninth death anniversary. Here we choose 10 masterpieces sung by her, both solo and in duet. The order is chronological.

This song had a legendary dance by Cuckoo in front of a drunk crowd in a smoky den. Raj Kapoor and K.N. Singh were also on screen. Shankar-Jaikishen composed the track specially keeping Shamshad’s voice in mind. Shailendra wrote the lyrics, “Ek do teen aaja mausam hai rangeen”.

One of Shamshad’s most popular songs, it was composed by O.P. Nayyar and written by Majrooh Sultanpuri. The lines were, “Kabhi aar kabhi paar, laaga teer-e-nazar, saiyyan ghayal kiya re tune mora jigar”. Kumkum played a labourer in this song, which also featured Shyama, Guru Dutt and Jagdeep as a boy.

Of these 10 songs, three each are composed by Naushad and Nayyar, both of who had many other hits with the singer. Songs she sang with either music director could make for great playlists on their own.