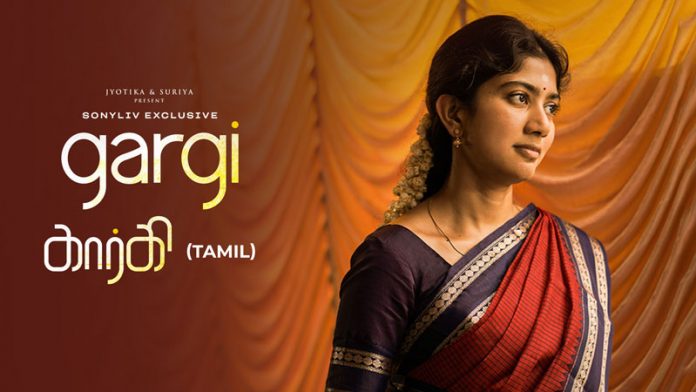 There has been a lot of attention and analyses focussed on films from the Southern states that have been so successful all over the country, that Bollywood was shaken. But besides those big budget action extravaganzas, small and meaningful films are also emerging from the region.

Gargi (streaming on SonyLiv in Tamil and dubbed in Hindi), written by Hariharan Raju and directed by Gautham Ramachandran is one such strong, female-led film, starring Sai Pallavi. Before the credits, the filmmakers lists many reasons for making the film, “inspired by movies I saw, did not see, looked for but could not watch, never got made, got made by never released…” and so on.  Which makes for an earnest statement of intent.

The eponymous protagonist of the film is a school teacher from a poor family. Her father Brahmananda (RS Shivaji) is a security guard in an apartment building and her mother sells idli-dosa batter, her younger sister is in school. The family’s existence is upended with Brahmananda is arrested as one of the five accused in the rape of a nine-year-old. When she goes to the police station to inquire about her father, the cops are brusque, but advise her to leave the city.

Sure enough, the next day, when the media name Brahmananda as one of the accused, their home is pelted with stones. The media covers the sensational case with great relish, and Gargi is pushed into the melee. However, Gargi is sure her father has been wrongly accused, and when she is abandoned by everybody else, including the lawyer who is forbidden from taking up the case by the bar association, his assistant, a newbie lawyer, with a stutter, Indrans (Kaali Venkat), agrees to defend Gargi’s father, because he has not yet established a reputation worth losing.

Gargi’s fiancé Pazani (Kalesh Ramanand) is willing to stand by her, provided she leaves the city with him and leaves her father to his fate.

The film examines the trauma of the family of an accused criminal, and is also an emotional legal drama of a daughter’s belief in her father’s innocence. Well-written, keeping the various perspectives of the incident and its aftermath in mind, and controlling the various strands of the story, the film places Gargi at the centre of a society that is quick to judge and even quicker to condemn. Interestingly the judge in the case (Sudha S) is a transgender, and a progressive point is made without any fuss. The ending is unpredictable and gets a bit preachy, but throughout its running time,the film is absolutely gripping.