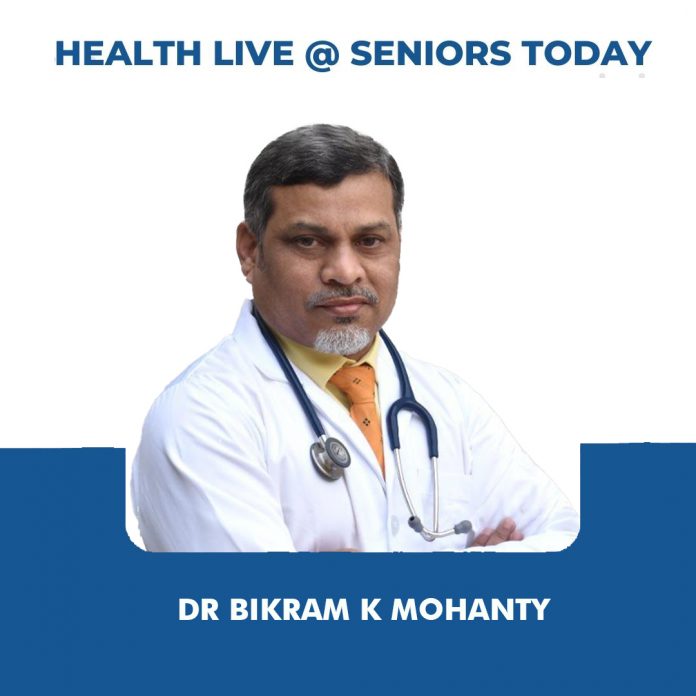 On 24 Sep, 2022 Seniors Today hosted the weekly Health Live Webinar. This week we had with us Dr Bikram K Mohanty, Sr Consultant Cardio-Thoracic & Vascular Surgeon who spoke on and answered questions about Coronary Heart Disease- Prevention and Care.

Dr.Bikram Kesharee Mohanty is a Cardiac Surgeon of great repute with 27 years of experience in hardcore heart surgery. He has dealt with the most complicated cases and emerged successful. After graduating in medicine from Cuttack in Odisha, he pursued his post graduation from Safdarjang Hospital, University of Delhi. Thereafter, he specialised in Cardio-Thoracic surgery from the National Heart Institute. He has also done commendable work in paediatric and neonatal heart surgeries. He keeps himself afresh with the recent trends like, keyhole heart surgery, robotic heart surgery, heart failure surgery and heart & lung transplant.

Apart from cardiac surgery, he is also an expert in thoracic as well as vascular and endovascular surgeries. Understandably, he is one of the rare adepts who handles both adult and paediatric cases with precision of the highest order. His efforts have earned him appreciation from all quarters, national and international forums alike. Dr Mohanty also has the distinction of working with many stalwarts of cardiac surgery with worldwide fame. With a large body of academic and literary works to his credit, he is deemed as one of the foremost writers in the field of cardiac surgery and ancillary disciplines.

Dr Mohanty is equally passionate about his hobbies and interests. He got into acting in 1985 when he was in his first year of MBBS. He was the Dramatic Secretary to the college union, then became an anchor and an auditioned television actor, did a plethora of telefilms, shorts films, tele-serials and public awareness TV commercials in various languages. He became a scriptwriter, producer and director and was very active in the theatre movement in Delhi. One of his achievements in this trade was to be involved in the Hollywood feature film “Eat, Pray, Love” (starring Julia Roberts) as the medical technical advisor, he also did a cameo in it. His latest venture in films is producing the English feature film “Unfateful”, which has already received a Laurel at the XVIII Cine Pobre film festival, Mexico 2020 and also in the process of getting into many film festivals around the globe. He also keeps a keen interest in singing

Heart is synonymous with 2 other words, which are- coronary and cardiac.

Heart is an organ which pumps blood throughout our body. And blood is nothing but a carrier for oxygen which is required by each cell, tissue and organ for survival.

Similarly, heart itself is also a living organ which requires oxygen for survival.

Heart is a muscular structure i.e. it is made up of muscles.

So, the arteries or the blood carrying tubes which carry blood and oxygen to the heart muscles are known as coronary arteries.

Heart muscles are supplied by the coronary arteries, their branches and sub branches, so one and so forth, thus teaching every cell to deliver the oxygen.

If there is any block in any of these arteries or their branches, because of which the tissues or the cell is deprived of oxygen, it can cause a sharp pain in your chest, and that pain is called Angina.

If the blockage is a significant one, where it blocks 60% or more of the diameter of the artery, and a clot occluded the blood supply to that region, this will cause the cells, muscle and tissue of the heart to die. This is known as a heart attack.

The causes for blockage in the coronary artery are many. Some of them are:

Measures that you can take to prevent coronary heart disease:

If you have a stent after an angioplasty, you cannot predict when you might need to get a stent changed or when it might get blocked. To ensure a long life for the stent, if you control your diet, and comorbidities, the stent can outlive its otherwise average life. The life of a stent depends on how the patient takes care of himself.