How to look after family members with dementia 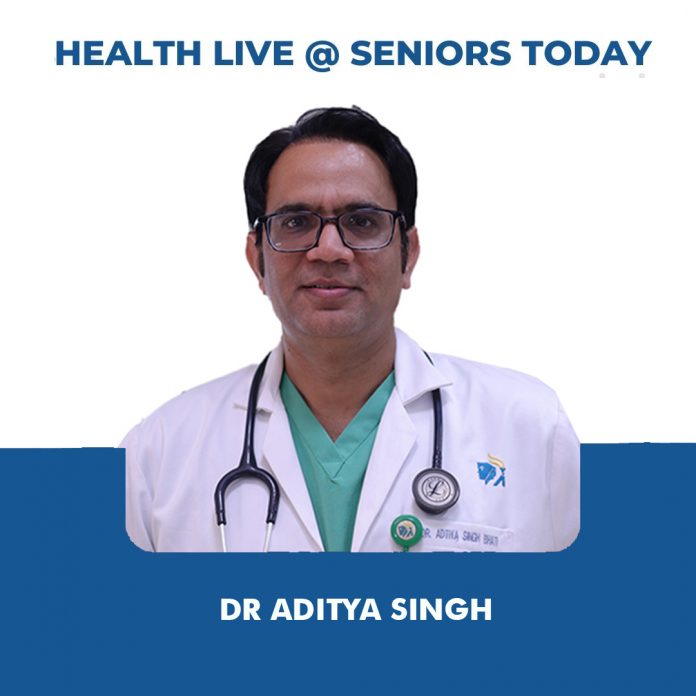 On 08 Oct 2022, Seniors Today hosted their weekly Health Love Webinar with Dr Aditya Singh who spoke on – How to look after family members with Dementia.

A little about Dr Aditya Singh

Dr Aditya Singh comes with an experience of over 2 decades in the field of neurosurgery. He is currently associated with the Indraprastha Apollo Hospital, New Delhi as Senior Consultant in the Department of Neurology. He has vast experience in managing brain as well as spine disorders, including brain and spine trauma, vascular, skull based neuro-oncology and paediatric cases. His main interest include minimally invasive brain and spine surgery. Additionally, Dr Singh has been an academician and has published his work in national as well as international platforms and helps to groom young neurosurgeons. He received a note of appreciation and momentum from Mrs Mona Ashraf, the Indian Consulate in Switzerland. He was also felicitated by the Geriatric Society of India for his immense contribution to the society in Oct 2018. He recently received the International Board of Medicine and Surgery, the Emerald Award from them. His areas of expertise include brain and spine trauma, vascular injuries, neuro oncology and paediatric oncology.

When we hear someone say “dementia” we only think of loss of memory. Dementia is a chronic/ persistent disorder; a process in which there are visible personality changes along with memory loss and impairment.

We all need to know that dementia can occur because of various reasons, however in our part of the world we believe that it is only associated with the elderly.

There are few causes which are reversible.

Dementia can also occur in a young person

In the elderly, there are different causes of dementia.

There are various classifications of Dementia, of these, for example frontotemporal dementia is progressive and is not reversible.

Dementia due to Alzheimer’s in the age of 50s to 60s is not a good sign.

Alzheimer’s usually sets in a little late, in the 70s or 80s. But when it occurs in the age of 50s/ 60s or 70s, it is not a good sign. Leading to an increase in the burden on caregivers and the patient also suffers.

Dementia patients can classified in to 3 types for easy understanding

Lessons for caregivers with elderly suffering from dementia:

These proteins i.e. Lewy body proteins get deposited in the vascular structure of the brain thus affecting the areas which are responsible for our memory, which is the temporal region of the brain.

These days, the number of cases diagnosed with dementia has increased, the reason being awareness about the disease and early intervention and diagnosis. It can also occur due to the stress level in our lives. Another factor that might have caused a rise in the number of cases of dementia is loneliness.

Dealing with stress is an important factor and learning how to cope with it can help.

Indirectly, there is an increase in the incidence of dementia in diabetic patients with uncontrolled sugar levels.