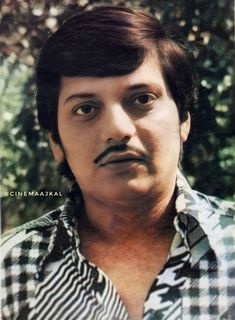 Actor Amol Palekar was featured in some very popular slice-of-life films in the 1970s. Some of them had huge hit songs.

To mark his 78th birthday, we choose 10 songs filmed on the actor. Interestingly, he didn’t appear on both the hit numbers of his first Hindi movie Rajnigandha, though there was a very fleeting appearance before the first words of the title song started. The order is chronological.

Salil Chowdhury composed this gem sung by Yesudas and Asha Bhosle. Half the love song was filmed showing Dharmendra and Hema Malini acting in a film Palekar was watching in a theatre. The other half had Palekar and Vidya Sinha in the Mumbai streets and in a BEST bus. Lyrics were by Yogesh.

The voice of Yesudas suited Palekar perfectly. This song was composed in raag Dhani by Ravindra Jain, who also wrote the lines, “Gori tera gaon bada pyaara, main toh gaya maara, aake yahaan re”. It was filmed on Palekar, Zarina Wahab and Master Raju. The film was a musical hit.

Hemant Bhosle composed this catchy tune picturised on Palekar and Ranjeeta in a garden sequence. It was sung by Asha and Mohammed Rafi. Yogesh wrote, “Zindagi ke safar mein na jaane, kab kaise yeh do anjaane, hue pyaar mein yoon deewane”. This song was a radio hit in its time.

The team of Yesudas and Asha got together again on this song, filmed on Palekar and Shabana Azmi. It was a classical-flavoured tune composed by Bappi Lahiri. Yogesh wrote, “Gaao mere mann, chaahe suraj chamke re, chaahe laga ho grahan, gaao mere mann”. The song made wonderful use of percussion and flute.

This film was directed by Palekar himself. ‘Raghuvar Tumko’ was a Tulsidas bhajan sung by the legendary Pandit Bhimsen Joshi in Mishra Khamaj. Anil Chatterjee played the actor shown singing, though Palekar appeared throughout the song. Music was by Jaidev. Joshi also sang the bhajan ‘Thumak Thumak Pag Dhumak’.

Four of these were sung by Yesudas, and the two combined on the other hits in Chitchor, namely ‘Jab Deep Jale Aana’, ‘Aaj Se Pehle’ and ‘Tu Jo Mere Sur Mein’. It was a wonderful team.