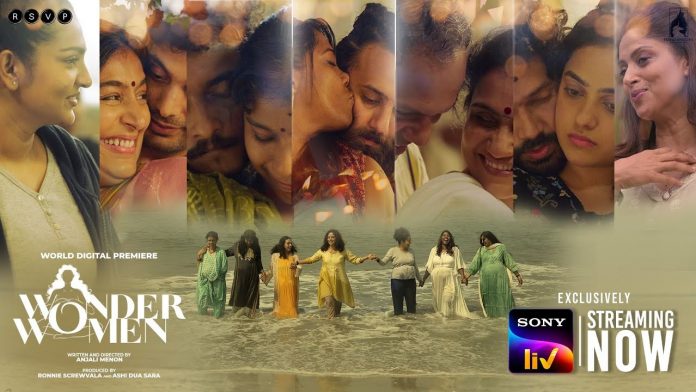 In the Hindi film space, stories of female bonding go into the Veera Di Wedding box–rich young women on a trip to enjoy themselves, and maybe discover some hitherto hidden facet of themselves.
Anjali Menon’s Wonder Women is different in that it picks up a bunch of women, who have settled down and are expecting their first child. Unlike the old joint family, where a pregnant woman had the support of other women, and the benefit of their experience, in the urban nuclear set-up, women are often left to fend for themselves. Although in India, there is usually an older female relative around to help, and there is a tradition of a pregnant woman goiing to her parents’ home for the delivery, ostensibly to ‘rest’ and be pampered by her mother– something a mother-in-law won’t be inclined to do.
The concept of the pre-natal class has come here from the West, where a support system is usually lacking, and it does helps couples to prepare for the birth and parenthood–though most men still think it is a woman’s problem to deal with.
In Wonder Women, six pregnant women from different social backgrounds, gather at Sumana, a pre-natal care centre in Kerala, run by the affable and patient Nandita (Nadiya Moidu) with the help of an assistant Gracy (Archana Padmini), who is the only one in the group expecting her second child.
The film gives a bit of each woman’s back story, which is too quick and cursory.  Veni (Padmapriya) is accompanied by her domineering mother-in-law (Radha Gomati), who is against the idea of her joining Sumana, and her husband (Srikanth K Vijayan) is indifferent. The grumpy Mini (Parvathi Thiruvothu) is a single mother, Saya (Sayonara Philip) is not married to her partner (Praveen Premnath), but he is there to support her. Nora (Nithya Menen) is  a stable marriage, but her husband (Harris Saleem) is not too thrilled by the idea of fatherhood. The odd one out is the Marathi-speaking Jaya (Amruta Subhash), for whom this IVF baby is her last chance at motherhood, but she has the love of her husband Umesh (Sandesh Kulkarni).
The idea of exploring modern relatioships, the joys and problems of parenthood in today’s troubled world was terrific, but Menon fritters it away. The film with its short running time does not allow her to explore the subject with any depth, or allow the audience to understand or sympathise with any of the characters–except perhaps Jaya, because Amruta Subhash plays her with such empathy.
The viewer does not, know, for instance, who Mini is,  what she does, and why she is so unfriendly;
or why Veni’s mother-in-law suddenly has a change or heart. Almost nothing is known about Nandita till a small hint is dropped righ at the end.
After declaring that the film is dedicated to sisterhood, all you see is the women doing yoga and pranayam, or ‘practicing’ with little dolls– there is little interaction or any meaningful conversation between them. Wonder Women did not need any induced melodrama, but it could have done with a lot more fresh insight.
It’s a pleasant enough film, with a fine cast; too short to get boring or heavy-handed, but also a wasted opportunty, when there are so few stories of real women and their lives being made.
Share
Facebook
Twitter
Pinterest
WhatsApp
Previous article10 Amol Palekar songs
Next articleSpot the Differences #52