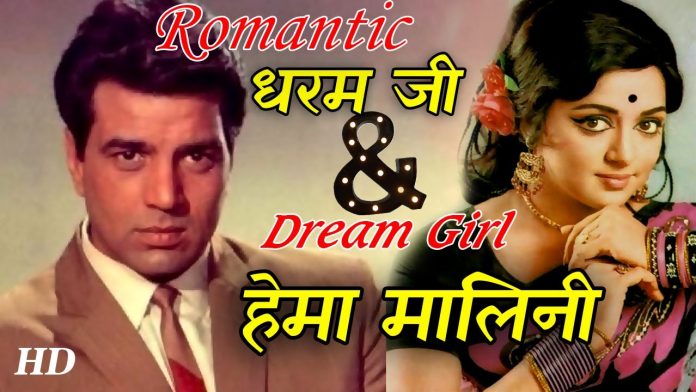 Dharmendra and Hema Malini have been among the most popular screen jodis ever, and they did the best of films before getting married in 1980. To mark Hema’s 74th birthday on October 16, we thus chose 10 songs picturised on the couple. The order is chronological.

This was just a fun song in which Bakshi wrote, “A B C D chhodo, nainon se naina jodo, dekho dil na todo, aai shaam suhaani, Raja Jani, Raja Jani”. Sung by Kishore Kumar and Lata, it was composed by Laxmikant-Pyarelal. The chemistry of the lead pair was fantastic.

Dharmendra, Hema and Shatrughan Sinha were filmed in this song, along with a large group. Rafi and Lata sang the main melody, and Shatrughan chipped in with spoken lines. Music was by Laxmikant-Pyarelal, with Bakshi’s main lines being “Aa bata de yeh tujhe kaise jiya jaata hai”. The film had the hit song ‘Gaadi Bula Rahi Hai’.

One of the most popular songs featuring the duo, this was shot on a tonga-ride. Kishore brought out the mischief, and R.D. Burman came up with a frothy tune. Bakshi’s lines, “Koi haseena jab rooth jaati hai toh aur bhi haseen ho jaati hai” are well-remembered. The song had many slapstick moments which suited the situation.

Dharmendra and Hema showed great coordination on this song where Bakshi wrote the lyrics and also sang the opening lines before Rafi and Lata took over. Music was by Laxmikant-Pyarelal. It was famous for the ‘coat throwing’ scene when the couple reunited. The film also had the hit ‘Kal Ki Haseen Mulaqat Ke Liye’, picturised on the duo.

Dharmendra made a special appearance in Kinara, and Bhupinder sang for him in this gem. This was written by Gulzar with music by R.D. Burman. The main line was “Ek hi khwab kai baar dekha hai maine” and the rest of the song was filled with metaphors typical of the lyricist. The song remains underrated.

Interestingly, nine of these songs were written by Bakshi. That’s just a sign of how prolific he was in the 1970s. Of course, those words went perfectly with the Dharam-Hema screen magic.