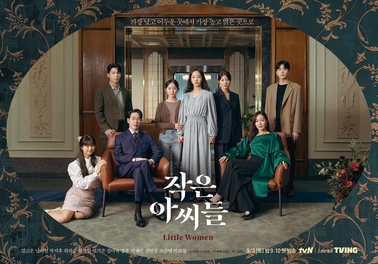 Romantic soap operas and crime thrillers from Korea have caught on with viewers everywhere; it’s interesting to come across a modern version of Louisa May Alcott’s 1868 novel Little Women, about four March sisters and the tribulations of their impoverished family. Over the years, the book has been adapted several times for the screen, most recently in 2019 by Greta Gerwig.

Chung Seo-kyung’s adaptation is very loosely based on the coming-of-age novel, and in the 12-part series, there are three Oh sisters, trying to survive with dignity after being left in debt by their alcoholic father and abandoned by their mother, who runs off with the money the two older sisters In-joo (Kim Go-eun) and In-kyung (Nam Ji-hyun) have saved for the youngest In-hye (Park Ji-hu), so that she could take a school trip to Europe.

Like so many Indian soap operas, Korean domestic dramas do not exactly have independent and inspiring women; Little Women is being appreciated by viewers for breaking some outdated gender norms.

The sisters dream of what they would do if they had money, even as they struggle to be accepted at their workplace, where they are not respected by their bosses and co-workers because of their underprivileged background. The oldest sister is divorced and works as an accountant in an office where she is treated as an outcast. The second is a reporter , accused of being “too empathetic”, is chasing a story about crooked politician Park Jae Sang (Um Ki-Joon), who aims to be the city’s mayor. The youngest is a talented artist who managed to win a scholarship to a prestigious art school and her sisters don’t want her to suffer in any way due to lack of money.

The writers and the directors take an incisive look at Korean society and the position of women, while including enough twists in the plot to keep viewers hooked over 12 hour-long episodes. Into the emotional mix, a thriller element has been added, which raises the appeal of the series.

In-Joo’s life is upended when a colleague and fellow “outcast” Jin Hwa-Young (Choo Ja-Hyun) dies, leaving her a large sum of money and a mystery of a 70 billion slush fund to deal with. The sisters find themselves up against the sinister Jae-Sang and his powerful family and a deadly organisation, They are  embroiled in a series of disturbing incidents– kidnapping, murder, embezzlement, court room drama all thrown into the complicated mix and stirred with a dash of romance, to enhance the unpredictability of the plot.

The show has fine performances and is beautifully shot; if viewers are comfortable reading sub-titles—it has not been dubbed into English—Little Women is a rewarding watch.