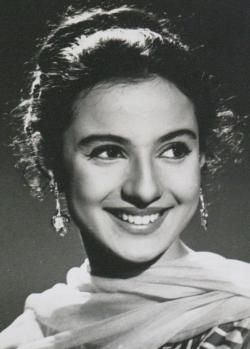 Daughter of actress Shobhana Samarth and sister of Nutan, heroine Tanuja rose to fame in the early 1960s while still in her teens. For almost 15 years, her films had great songs, as she was paired opposite leading heroes.

In these 10 songs we have chosen to celebrate her 79th birthday on September 23, the most have been filmed on Dharmendra and Rajesh Khanna. Even the others were big hits in their time. The order is chronological.

Tanuja was only 18 when this film was released. It was a huge hit for singer Mubarak Begum who was said to have been chosen by music director Snehal Bhatkar after Lata Mangeshkar expressed her unavailability. Lyrics were by Kedar Nath Sharma. The words began, “Kabhi tanhaiyon mein yun hamari yaad aayegi, andhere chaa rahe hongi, ke bijli kaundh jaayegi”. Anand Kumar also appeared.

Tanuja looked gorgeous in pink as she was serenaded by Rajesh Khanna in waistcoast. This was a mega-hit for Kishore, with R.D. Burman composing the music, and Majrooh writing, “O mere dil ke chain, chain aaye mere dil ko dua keejiye”.

Tanuja took a short break in the mid 1970s following the birth of her daughters Kajol and Tanisha, but returned to play supporting actress. She was seen earlier this year in the OTT series ‘Modern Love Mumbai’, playing the grandmother of a gay man.