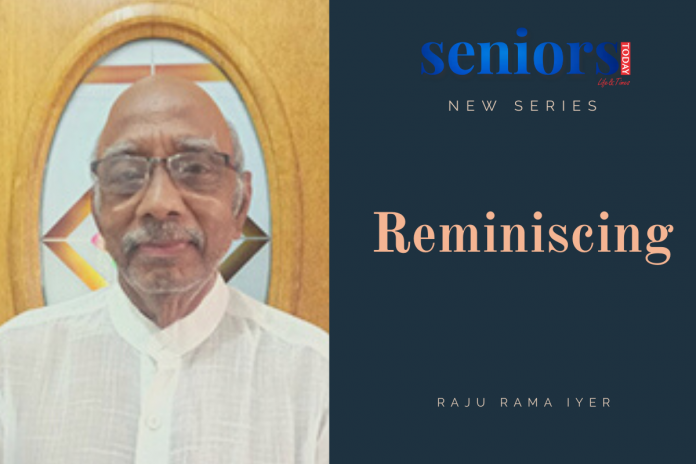 I was born and brought up in the suburbs of Mumbai in a place called Vile Parle. I had a typical middle class south Indian brahmin upbringing with a staple combination of compulsory education/sports/ music and religion.

We had a wonderful social group consisting of all communities and regions of India in our society and its neighbourhood. Such a multicultural environment fostered imbibing the nuances of cultural differences and acceptance.

Hindi movies and cultural programs in the various “Sabhas’ were integral to our life in Mumbai.

Typical of South Indian Palghat Iyer families’ ,mandatory upbringing is the necessity of adding Music to our portfolio of like skills. I picked percussion instruments- Mridangam-as an instrument of choice and enrolled for regular classes at the tender age of six. I had to travel all the way from Vile Parle to Matunga to be under a great guru by Name Angor Parameswara Iyer who was a stalwart in those days in Mumbai .

Since  mridangam is an accompaniment to the  lead singer, understanding singing nuances  is of paramount importance and I learnt them during the 15 years of training.

My first public performance was in my school at the tender age of 12 In Vile Parle School grounds for the annual day function which was well attended by the local community and of course students,Parents,relatives et al

I received the best performance prize  for my solo performance on a percussion instrument-Mridangam.

I also had the unique distinction of performing at the great “Shanmukhananda Hall” of Mumbai for a major cultural event.

During those years ,once I became proficient my guru started recommending me to perform with artists in Mumbai at various Sabhas.

I was the percussionist of choice for all the programs conducted under the aegis of our society and its neighbourhood.

I have been an accompanying artist for various singers and in cultural programs. I have played for famous Tamil Bhajan singer “Pithukuli Murugadas “in Mumbai

Hindi movies were staple entertainment for youngsters in those days in Mumbai and Singers like Mukesh,Mohammed Rafi,Talat Mahmood,Manna Dey,Mahendra Kapoor influenced me in my understanding of Hindi Music.

My career start moved me to a city in the South and the usual pressures of work and inadequacy of time pushed my music interest to the backburner.

However this got rekindled once I decided to settle down in the city of Coimbatore early  and I have been pursuing my hobby ever since, including recording songs on Star Maker etc. I have recorded  close to 80 songs on star maker. I have several followers.