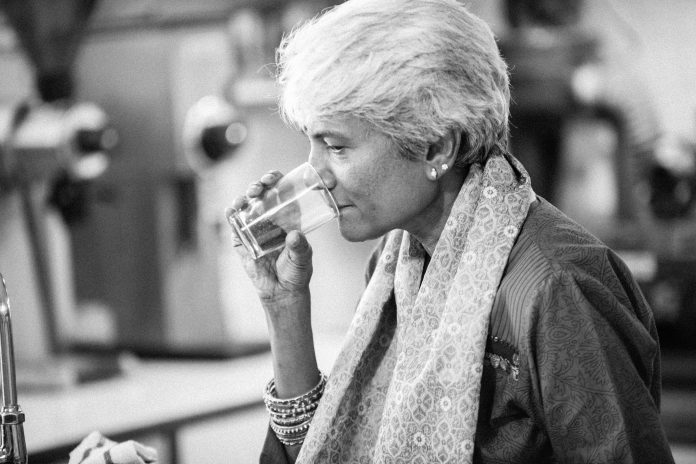 It all began with grandma’s daily ritual of sipping traditional aromatic filter coffee/kaapi every morning. Little Sunalini and her sister would sit with a tall glass of hot milk eyeing grandma’s filter coffee in the hope of getting a few drops of it. Grandma would say, “If you behave well today then perhaps tomorrow I will let you have a few drops of my coffee.” She would keep her promise and the next morning both sisters would get a few drops.

Grandma had an old-fashioned brass dabba filter and was very particular about her coffee blend. Once a week she would get them roasted and every time she would go to the coffee shop little Sunalini gave her company. At the shop, grandma would customise her coffee blend and as the shopkeeper ground the coffee, the aromatics of it made little Sunalini sway with joy. This was the early association with coffee for Menon, the aroma and a traditional family of coffee drinkers.

Another childhood memory Menon shares is about spending her holidays at her uncle’s tea gardens. The weather was lovely, the house had tall ceilings, sounds reverberated, aunt fed delicious food and going to the tea factory with her uncle was an unforgettable experience.

At the tea factory, she was introduced to the process of tea-making and tasting. Her uncle would slurp a spoonful of tea and spit it out. Whenever the tea was bad, he would call out the tea-maker. It was a fun experience for the Menon sisters. Post her uncle’s tasting session, the sisters sisters sat at the tasting table and had a little spitting competition of their own. Back then, little did she know, that slurping a spoonful of liquid and spitting it out would be her calling as a coffee cupper.

Becoming India’s first woman to be a coffee cupper 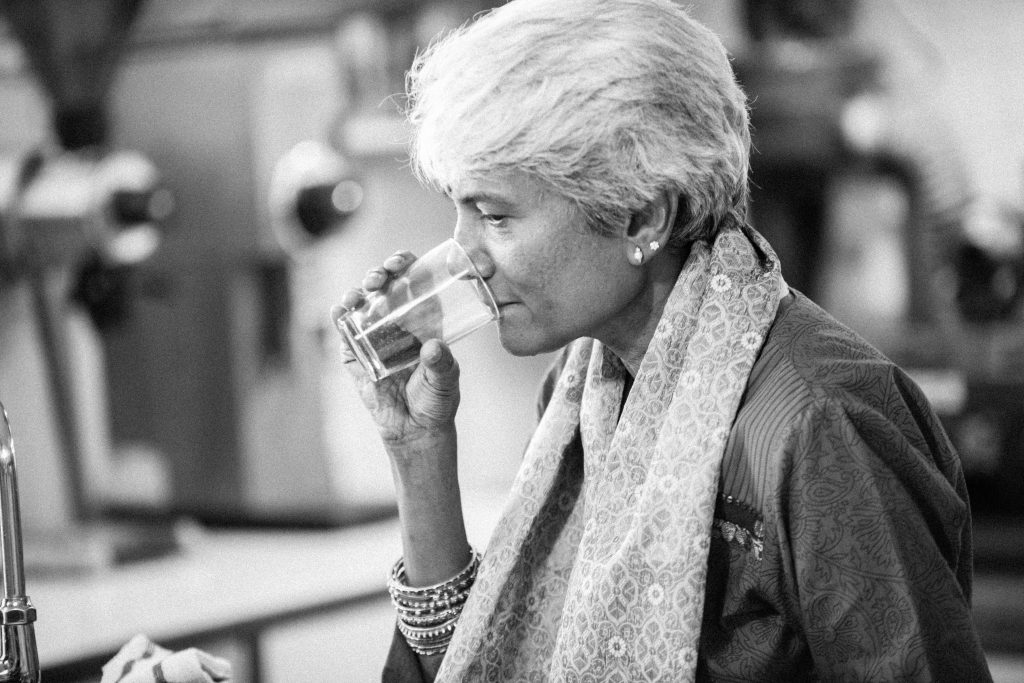 When Menon arrived in Bengaluru after doing a master’s in food technology, her plan was to become a dietitian. Those days her sister was in the US, hence the idea was to go there. She had applied to the New York Institute of Dietetics, and since it was expensive, she applied for a scholarship as well. By the end of all the procedures, Menon acquired a seat at the New York Institute along with the scholarship. She was all set to go to the Big Apple.

One day, Menon stumbled upon an advertisement calling for an assistant cup taster. She got drawn to the idea of sipping many cups and getting paid for it. She went ahead and applied for the post. As she had the required qualifications, she got called for an interview.

She went to the office for the interview and noticed that in a room full of men with PhDs, she was the only woman, and with just a master’s. At that point, it didn’t matter to her whether she got the position, because she was anyway flying to the US. However, she was curious about what cup tasting entailed, which was what motivated her to apply to the job.

The first round was a tasting test, which Menon cleared. She also cleared the external panel and then at the internal panel, the panelist said: “She is a woman! We can’t have a woman at the tasting table.” Those days there were very few women who worked as professionals as most would get married and leave their jobs. Hence the internal panelist didn’t think it was a good idea hiring Menon. She was upset about the sexist statement and told them that they should have mentioned that the post was reserved only for men. However, the then chairman of the Coffee Board, said: “We can’t disqualify her because she is a woman. If she has done well then she deserves it.”

Menon did land the job as the assistant cup taster, but had to make a choice: studying in New York or foraying into an undiscovered world of being a cupper. She contemplated, and decided to go with the cupper opportunity. So, instead of going to New York, she ended up going to Switzerland for professional cupper training, thus becoming India’s first woman in the field of coffee-tasting.

The Art of Coffee Cupping 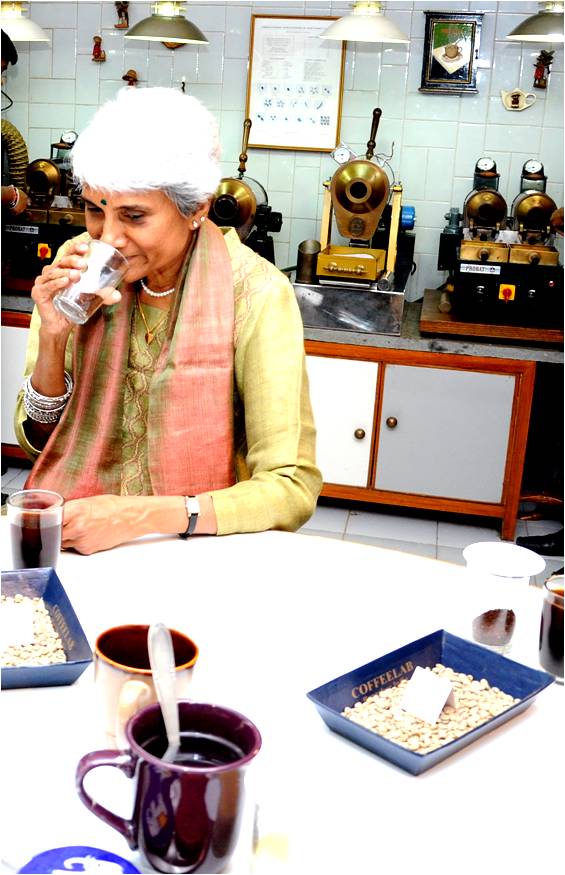 Coffee cupping is the scientific method of assessing and appreciating the aromas and tastes of brewed coffee. The process is complex and there are certain protocols that needs to be followed. People may often think that coffee cupping is all about sipping coffee and having a jolly good time but the truth is far from it.

Menon explains: “When I talk about tasting I look for taste profile in different ways and follow the cupping protocol along with various brewing methods as it gives a better insight into various flavours and taste nuances.”

The protocol begins by checking the visual quality of the beans. Coffee farmers send 300 grams of coffee bean samples. The first step is to visually assess them, which is identifying the moisture content, looking for bacterial growth, and checking if it’s a washed, natural preparation or honey preparation.

The next step would be to look into the size of the bean. There are certain specifications which have been stipulated by the Coffee Board of India. The size, shape and the colour of the bean gives a lot of information about how it has been grown and looked after.

Then comes smelling the beans. This gives information about how the beans have been handled and stored. Coffee beans are often grown along with black pepper and the farmer tends to store the beans along with pepper. This results in the beans taking on the spice notes of the pepper, which is a big no for any buyer.

Identifying the defects is the next step. There are different types of defects, it could be a black bean, a brown bean, a cut bean, or it could be insect damaged. After looking into all the specs an award is given to the visual appearance of the bean.

Roasting has a certain protocol. There is a standard measurement along with a colour meter which suggests a dark roast or a medium roast, or a light roast. This colour value is related to the type of equipment used for roasting. Roasted beans need to rest for eight hours for degassing before grinding it. Degassing the roasted beans help release the carbon dioxide. This process takes place an evening before the grinding and tasting.

The next morning the process of grinding takes place. Now it’s essential to be mindful when it comes to the grind, it can’t be coarse or fine the ideal grind for tasting would be medium. In medium grind as well there are certain specs that needs to be followed. The next part is, within 15 minutes of grinding the cupper has to evaluate the smell.

There are two parts to tasting.  One is the fragrance, which means the dry state. The cupper smells the powder and then comes the wet state, when fresh boiling water is poured into the cup for brewing the cup of coffee and the aroma of the cup is evaluated.

When water is poured over the coffee there is a certain ratio that needs to be followed. In 8.25 grams of coffee powder 150 ml of fresh boiling water (93-96 degree Celsius) is added. This temperature of the boiling water is ideal to prepare the liquor. The idea behind it is that it keeps water from expelling all the oxygen.

This brewing of the liquor takes place for about four to five minutes. This helps all the aromatics to surface for evaluation. Then comes breaking of the crust and inhaling the aroma.

To be able to decipher the flavours, one needs to build their knowledge, which develops over time.  It’s about making an association with various other flavours. For instance, a cup of coffee may have a flavour profile of mandarin, apricot, plums, caramel, toffee, chocolate… It’s about having an open mind to correlating the already tasted ingredients and associating and identifying the same in the cup.

Then comes the mouth feel which is a combination of weight and texture of the brewed coffee. Then comes the aspect of acidity, which is the brightness or sharpness that hits the palate.

A spoonful of coffee is tasted at different temperatures. It begins with 70 degrees Celsius, and two important attributes are evaluated – flavour and aftertaste. Then it’s further allowed to drop down to 60 degree Celsius when attributes such as mouthfeel, acidity and balance are evaluated. Balance is an equal measure of mouthfeel, acidity, flavour and aftertaste, with aftertaste representing the taste that remains in the palate after cupping/ tasting of the brew.

While purchasing coffee, some buyers look for balance of the cup while others look for a more bright coffee. This is where having an understanding about the market comes into play.

Role of a cupper

It’s not just about knowing how to follow cupping protocols but also guiding farmers into producing good quality coffee preferred by the buyer. 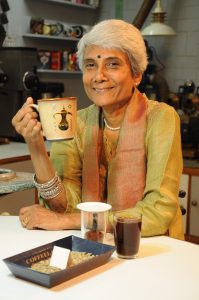 Life of a Coffee Cupper

For a cupper, a heavy day calls for about 70-80 cups of tasting coffee in different modes of preparation. Sometimes the number of cups become very large. For each sample that comes in for evaluation, it can go up to about 15 cups.

Menon shares: “Coffee tasting every day is a humbling experience. For, I see it as bean of wisdom that is full of emotion, love, and humility. You make friends for life and the best part is, if I see you after many years, the coffee bond of friendship would still be alive!

She continues, “It teaches me a lot about the workers on the farm; every now and then I visit the coffee farms and there are some women workers who’ll come to hug me and bring me flowers, it’s a precious moment. The coffee bean has not only helped me in developing friendship, knowledge and wisdom, but has also taught me humility. Every time I think I know it all, the bean helps me to fall, to realise that there is yet much more to learn and that one needs to be humble!”

Just like a bright cup of warm coffee Menon prefers, she closes the interview on a rejuvenating note, “I enjoy being a cupper because every day it’s expecting the unexpected. It’s never a boring and dull day. Every day is different. Every day I wonder what the cup will bring to me, what the day’s discovery would be.”