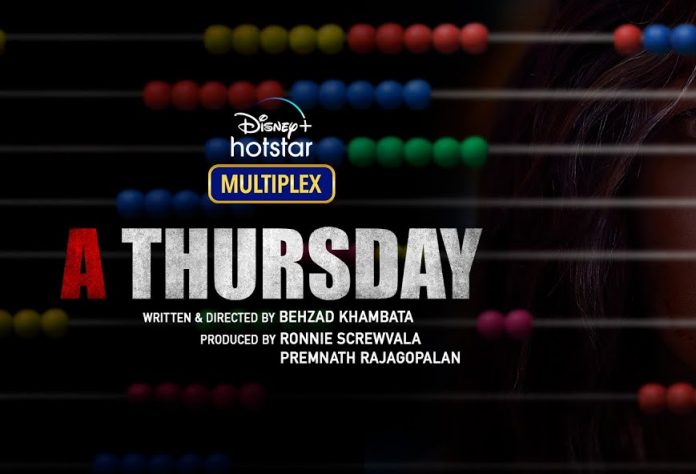 The title of Behzad Khambata’s A Thursday is obviously a hat-tip to the sleeper hit A Wednesday (2008– Neeraj Pandey) in which an angry citizen takes it upon himself to slap the city’s police force awake, in his solo vigilante fight against terrorism.

A Thursday (on Disney+Hotstar) uses the same basic formula, but with far less impact. On a seemingly normal day in her home that she shares with her fiancé Rohit (Karanvir Sharma), and where she runs a play school, Naina Jaiswal (Yami Gautam Dhar) suddenly takes her 16 students hostage and calls the cops to listen to her demands.  A helper, Savitri (Kalyanee Mulay) and a driver (Boloram Das) making a delivery, find themselves imprisoned too.

A posse of cops, led by a pregnant ACP Catherine Alvarez (Neha Dhupia) arrive, but Naina summons Inspector Javed Khan (Atul Kulkarni), who happens to be an overtly misogynistic, arrogant creep. He and Alvrez have past history, but he still speaks to her with utter disrespect— her name is saved in his phone as “Manhoos.”  So he tends to be slightly contemptuous of Naina, till she proves to be smarter than he thought.

The kids’ routine is undisturbed, so they are quite unaware of the drama taking place outside, as cops, distraught parents, neighbours and, of course, the media land up in full force.  To heighten the tension, it is raining almost continuously, as the cops and bystanders scurry about with umbrellas and windcheaters. Two over-eager media idiots in pursuit of an exclusive actually alert Naina to the team of commandos planning to storm the apartment. Shalini Guha (Maya Sarao) from a news channel has her son among the captives, and finds it hard to be objective; when an accidentally overheard phone conversation reveals that Naina suffers from depression, she calls her “paagal” on air.

Through it all, Naina switches from hard-headed negotiator to sweet-natured teacher to the kids who adore her. It is not clear how she acquires and learns to shoot a gun, but as the reasons for her actions are revealed, there is a wave of sympathy for her, from the very people baying for her blood on social media.  The plot does go from intriguing to absurd to ridiculous, but Khambata had a point to push across, which he does through Naina’s justified rage.

Dimple Kapadia (in Sonia Gandhi get-up) makes a guest appearance as Prime Minister Maya Rajguru, who is undermined by her male subordinates because she is a woman, and hence, emotional.  She snaps at her smug secretary, “Emotions are an asset,” and gives Naina a sympathetic hearing.

The film hinges on the performances, and Yami Gautam Dhar sharp-cum-deranged act is uneven and, in places, overdone with the eye-popping and sneering. Atul Kulkarni is surprisingly listless, and too good a performer to use a cigarette as a prop in every scene. Neha Dhupia is not given much to do after the pregnancy (to match with her real baby bump) reveal, she never seems to have a retort for Javed Khan’s nastiness—surely Alvarez did not reach ACP level by being passive. Dimple Kapadia elevates every scene she appears in.

The film with its manipulating of knee-jerk opinions is a reflection on a shallow, armchair social media venting, but in the end it is tough to take it seriously, because of its facile conclusion. Still, on OTT, a lot of flaws are forgiven, because of the casual-viewing nature of the medium.