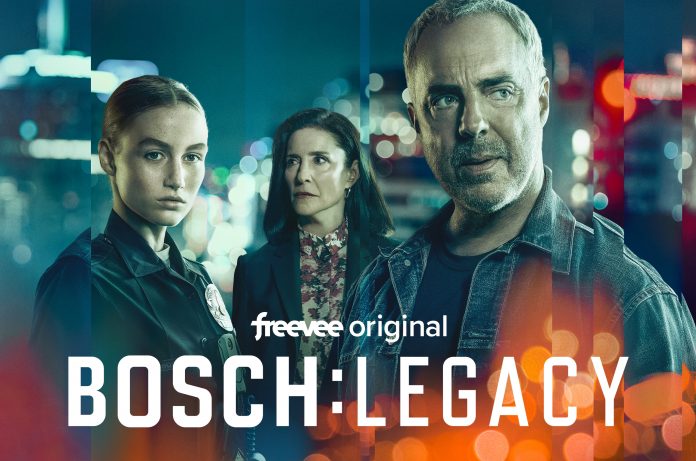 Bosch completed seven seasons, but the show bases on the character from Michael Connelly’s bestselling books, had to go on, because fans wanted more.

So Titus Welliver returns in Bosch:Legacy as the maverick Hieronymus ‘Harry’ Bosch, the jazz-loving LAPD cop, only now he is a private investigator—having quit the force in a huff– working with his former nemesis, lawyer Honey Chandler (Mimi Rogers). The only thing the otherwise dour Bosch loves more than crime fighting, jazz, and his magnificent cliff-top home, is his daughter Maddie (Madison Lintz). So he is not too happy when she gives up her idea of taking up a legal career and becomes a beat cop. She is assigned to the Hollywood Station, where her father used to work, which causes her training officer to be needlessly snippy with her.

In the last season, Honey Chandler had been shot, and survived only because Maddie reached her in the nick of time and called an ambulance. In Bosch: Legacy, Chandler wants Harry’s help to make her assailant, Carl Rogers (Michael Rose) pay for his crime.That’s one track in the series, the other is an old and ailing industrialist, Whitney Vance (William Devane), hiring Harry to trace his grandchild. Other subplots include Chandler taking up the impossible defense of a homeless man accused of killing a doctor; and Maddie’s cases, involving a rapist and a police shooting. The plots merge well and keep up the suspense.

No police procedural these days can do without a computer genius, so Bosch has on his side Mo (Stephen A. Chang). The delightful duo of Crate (Gregory Scott Cummins) and Barrel (Troy Evans) also turn up to help, and stave off boredom in retirement. Scott Klace returns as the friendly desk sergeant Mank, now helping Maddie, and Jamie Hector as Bosch’s old partner, Jerry Edgar, does a walk-on guest appearance.

Bosch, who was never one for following rules anyway, now finds he is free of job constraints, but also without the resources of the LAPD.  However, he is still as spry and every, and never shying away from a fight.

Connelly leads the writing team himself and also serves as one of the executive producers, on the show helmed by different directors without any discernible change in quality. The screenplay is crisp, the pace unhurried but smooth, and LA looks glittery as ever, even after an earthquake breaks Bosch’s glass house (and he has forgotten to pay insurance).

For Connelly fans, Netflix has an entertaining series, The Lincoln Lawyer, based on the character of a lawyer Mickey Haller, created by the writer. Bosch and Haller happen to be half brothers, and, in the books, wander into each other’s stories to help. There must be some legal or copyright reasons for them not appearing together on screen. There is a third Connelly series heroine, Renee Ballard, a kickass cop, who is also kept off screen. Which is a pity, because by themselves the three are fabulous, together they would be dynamite.