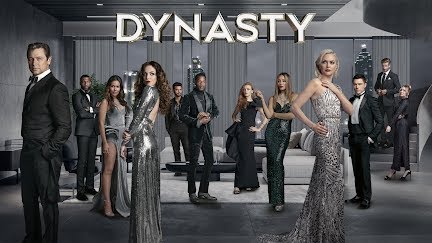 Back in the Eighties, two soap operas were quite a rage Dallas and Dynasty, both about rich, feuding families. They were so successful they triggered off a spate of copy cat and spin-off shows, and after a few years, both had reboots.

Five seasons of an updated version of Dynasty (original creators Richard and Elizabeth Shapiro) are on Netflix, and worth a binge for those who like complicated family dramas.

The original starred John Forsythe as business tycoon Blake Carrington, Linda Evans as his third wife Krystal, and the inimitable Joan Collins as his ex-wife, Alexis. Then there is a cocktail of offspring, siblings, rivals participating in loads of melodrama, affairs, jealousies and murder attempts.

More than the twisty plots of the series, it was the grandeur, glamour and fashion (those power suits with thick shoulder pads) that had viewers all over the world tuning in to watch the show.  According to information on the net, Esther Shapiro is quoted to have said, “We’ve done important things for women with Dynasty. For middle-aged women. You know, to let them know that it’s OK to want power and be romantic.” Joan Collins is reportes to have said to W Magazine, “Every single person on Dynasty was good-looking. You wanted to see rich, good-looking people fighting with each other.”

Though the old show did tackles issues like race and homosexuality, in the reboot (developed by Josh Schwartz, Stephanie Savage and Sallie Patrick) the rival Colby family is Black and Cristal (changed spelling) is Latina. Sammy-Jo (Heather Locklear in the original) is now a leather-clad gay man, as is Steven Carrington.

Grant Snow plays Blake Carrington, who is aiming at a career in politics with an eye on the White House.  His daughter Fallon (Elizabeth Gillies) has a fallout with Blake and starts her own company, with Jeff Colby.  Others scheming and plotting their way through the series include Alexis (Nicolette Sheridan/Elanie Hendrix), hers sons Steven and Adam, Blake’s half-sister Dominique, who is Jeff’s mother and Amanda, the daughter Alexis did not reveal to Blake.

Fallon, her troubles with her business and her marriage to Liam (Adam Huber), move up in importance, and of course, social media dictates a lot of how the characters behave, because a negative story in the press and its Twitter fallout can actually tank a company’s share.

The new series retains some of the lines and hat-tips the original several times. It has all the entertaining trashiness and designer costumes of the old series, and the look is just as glossy – the women have full make-up on even when they’ve just been shot and are in hospital (Fallon), or in jail suspected of murder (Alexis). The actors are all uniformly mannequin-like, but such a collection of such model-like gorgeousness is seldom seen in a single series.

Think of Dynasty as the grandparent of all family soap operas (Succession was just more sophisticated in its all-round wickedness) and enjoy it.