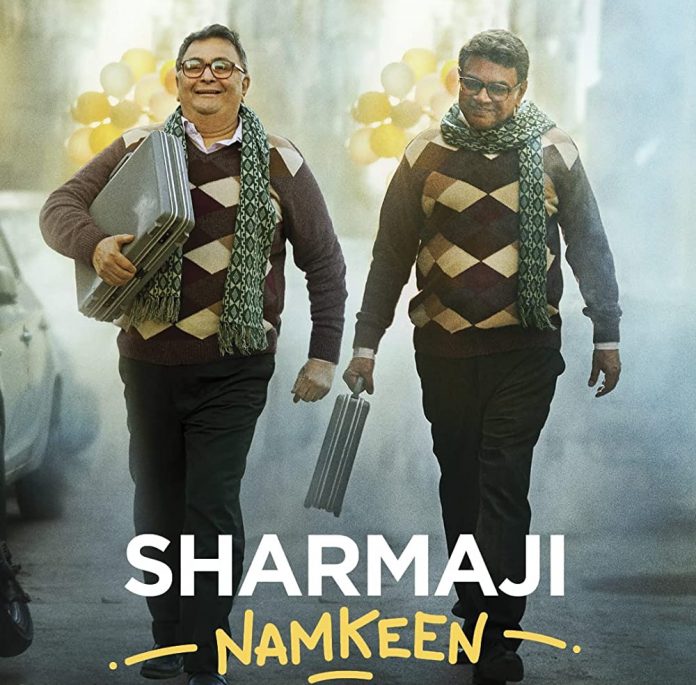 Most films about senior citizens are weepies about how they have been abandoned by their selfish children; of late there have been a few about finding love in the autumn of life. Hitesh Bhatia’s Sharmaji Namkeen tackles a very real problem that many seniors face—the boredom and sense of redundancy after retirement.  As the lead character in the films says, “Does the mind stop working at 58?”

Sharmaji Namkeen has another unique aspect—the protagonist is played by two actors. In an introductory sequence, Ranbir Kapoor talks about his father, Rishi Kapoor, passing away leaving incomplete the film that was very dear to him. The makers considered using VFX or the son using prosthetics to do the part; then it was decided to simply cast another actor in the hope that the audience would understand and accept.

Surprisingly, it is not such a distraction watching Rishi Kapoor and Paresh Rawal appear in alternate scenes, even though they look nothing alike and have very different styles of acting and speech. Brij Sharma retires from a kitchen appliances company and does not know what to do with his time, except cook and hang out with similarly idle friends. He considers Zumba classes, becoming a real estate broker, dog walker, chaat-seller, much to the exasperation of his older son Rinku (Suhail Nayyar). The younger son Vincy (Taaruk Raina), an aspiring dancer, is more easygoing. Rinku hopes to marry his rich co-worker Urmi (Isha Talwar) and move out of the family home and he has not shared the plan with his father.

Sharma’s friend Chaddha (Satish Kaushik) nudges him towards monetizing his culinary skills, and gets him to cook at kitty parties held by a group of cheerful ladies led by Veena (Juhi Chawla). He finds a new purpose in life and a bunch of raucous female friends whose company he enjoys. There is even a hint of romance with the divorced Veena.

However, when Sharma’s new hobby/profession is discovered by relatives—via that dreaded Whatsapp forward—they make fun of him. Rinku is appalled and humiliated that his father cooks in people’s homes, when his would-be father-in-law (Shishir Sharma) is a sophisticated businessman.

Had he lived longer, Rishi Kapoor would have starred in the Indian remake of The Intern, about retired people being offered second careers as interns. Post-retirement blues seems to affect men more, since a larger number of males go to offices to work, and homemakers seldom retire. If nothing else, they have to look after the needs and assuage the tantrums of their forcibly house-bound husbands.

Sharmaji Namkeen, is a pleasant watch, taking in an urban social issue of neglected elders, as well as the less-addressed one of dignity of labour. The film has its flaws, being somewhat half-baked being one of them, but Rishi Kapoor’s understanding of the character and his unbridled charm paper over the cracks; Rawal comes across as crabby (like the scene in which he nitpicks over the difference between momos and dimsums), but portrays a different trait of the same Sharmaji–one is sweet, the other spicy. Plus, there is the emotional hook of seeing the always fabulous Rishi Kapoor in his last role. It’s a pity that he never won a yearned-for National Award.