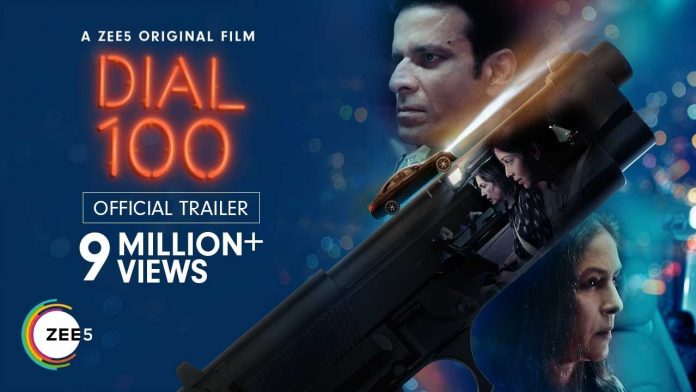 Manoj Bajpayee and Neena Gupta have both built reputations as formidable actors, and the very fact that they are in the cast of Rensil D’Silva’s Dial 100, makes the viewer cut through the clutter on OTT platforms and click on ‘Play’.

If nothing else, one is assured of fine performances; a pas de deux between the two would have been too much to hope for. Bajpayee plays Senior PI Nikhil Sood, who arrives through rainy streets at a too-spit-and-polish police control room, where the graveyard shift cops are fielding emergency calls over vada pao and tea.

Sood gets to deal with a woman who claims she is planning to commit suicide and he tries to calm her down while tracking her location over the computer screen. The first 20 minutes of the film focus a lot on Sood’s face – and Bajpayee has the confidence to allow the camera to get tight close-ups for so long—and Neena Gupta’s expressive voice.

Alarm bells ring in Sood’s head when a fellow cop reveals that the woman had specifically asked to speak to him—which means she knows he would be on duty at that time. The woman turns out to be a revenge-seeking mother, Seema Palav, who has a grievance against the police force in general and Sood in particular. She kidnaps Sood’s whiny wife, Prerna (Sakshi Tanwar) and dictates terms to the desperate cop.

Giving away more of the plot would ruin the ‘timepass’ thrill of watching the drama that unfolds, implausible though it is; suffice to say, it is a race against time, playing out almost in real time. If one were nit-picking, it would seem strange that a middle class couple own such a swanky car and manage to access guns.

There is also the troubling moral question that plagues the film—and minor spoiler alert here—why is it that a rich man who saves his son from prison by throwing money at a corrupt system a bad guy, while a cop who uses his police network and facilities to rescue his rotten apple son a hero?

The unarticulated and discomfiting angle is that parents are often unaware of what their kids are up to, and even if they do, they are incapable of preventing it. The belief that attentive parenting results in good kids is a myth. Parents can be as strict or doting as they want, outside influences and the lure of money is capable of corrupting anyone.

Bajpayee is one of the handful of actors who can wake up a weary script, this one’s worth a watch just to see how emotions flit across his face.