“My Mother is as simple as she is extraordinary” – PM Modi 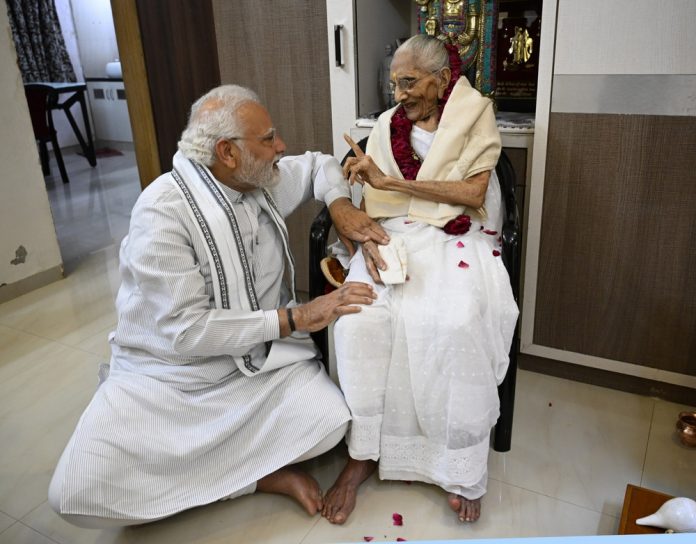 “Today, I feel extremely happy and fortunate to share that my mother Smt. Heeraba Modi is entering her hundredth year. This is going to be her birth centenary year.” wrote PM Modi on his mother’s birthday, June 18, 2021.

Hailing from the Modh-Ghanchi community of Gujarat, categorised by the Indian Government as OBC (Other Backward Classes), Heeraben married Damodardas Modi and gave birth to Narendra Modi 72 odd years ago.

Little did she dream that one of her five sons would rise to become the Prime Minister of India over two terms.

Though Heeraben Modi publicly accompanied her son on only two occasions, it was evident that age was just a number to her, and the love and support of a mother was at the heart of her actions. In 2016, she famously endured a long ATM queue in support of his decision to ban old currency notes and in 2019 she cast her vote in the Lok Sabha elections. Heeraben Modi’s life and sacrifices shaped PM Narendra Modi’s mind, personality and self-confidence in no small measure.

A symbol of resilience

Recalling hardships his mother faced during her childhood, PM Modi said, “My Mother is as simple as she is extraordinary. Just like all mothers.” At a tender age, PM Modi’s mother lost her mother. He said, “She does not even remember my grandmother’s face or the comfort of her lap. She spent her entire childhood without her mother.”

He recalled the tiny house in Vadnagar with mud walls and clay tiles for a roof where he stayed with his parents and siblings. He mentioned innumerable everyday adversities that his mother encountered and successfully overcame.

He mentioned how his mother not only did all household chores by herself but also worked to supplement the meagre household income. She used to wash utensils at a few houses and take out time to spin the charkha to help meet the household expenses.

PM Modi reminisced “During the rains, our roof would leak, and the house would flood. Mother would place buckets and utensils below the leaks to collect the rainwater. Even in this adverse situation, Mother would be a symbol of resilience”.

Deep respect for those engaged in cleanliness

PM Modi said that his mother had a deep respect for those involved in cleaning and sanitation. Whenever someone would come to clean the drain adjacent to their house in Vadnagar, his mother wouldn’t let them go without giving them tea.

Finding happiness in others’ joys

PM Modi mentioned that his mother would find happiness in other people’s joys and was extremely large hearted. He recalled “A close friend of my father used to stay in a nearby village. After his untimely death, my father brought his friend’s son, Abbas, to our home. He stayed with us and completed his studies. Mother was as affectionate and caring towards Abbas just like she did for all of us siblings. Every year on Eid, she used to prepare his favourite dishes. On festivals, it was commonplace for neighbourhood kids to come to our house and enjoy Mother’s special preparations.”

Death equals us all. Poignant images of her son carrying out Heeraben’s last rites capture the grief of a son who bids a final goodbye to his mother. Heeraben may not have touched 100 but the joy that she received was immeasurable and her story makes for a beautiful tale of simple motherhood with great love, and a son who grew up to rule one of the most powerful countries in the world.

Deepa Desa
Deepa Desa has a wide range of professional experiences in varied industries, ranging from Business, Hospitality, Tea, Beauty, Aromatherapy and Natural wellness therapies, spanning her 35-year career. She is an internationally certified Advanced Beauty Esthetician and Electrotherapist, (CIDESCO/CIBTAC). She is also an advanced Aromatherapist (CIDESCO/IFA), (2005). She has been a consultant for corporates (HUL- Lakmé Lever, Raymond’s, Nivea, Sofitel etc.), and stand-alone beauty and wellness projects. Deepa has extensively trained therapists, for international beauty product companies like BABOR, CACI, Éminence Organics, Kerstin Florian, Gemology, Phytomer, and many more. She introduced oxygen and high -end anti-ageing therapies to Mumbai for the first time, at the spa she co-founded, Tahaa Spa in 2006. She believes in a synergy of science and nature for effective skincare. Currently, she integrates her passion, creativity, and experience to create relevant, relatable articles and blogs, and holds one on one sessions to help stress- management using natural therapies. If you have any questions, please e mail her at editor@seniorstoday.in