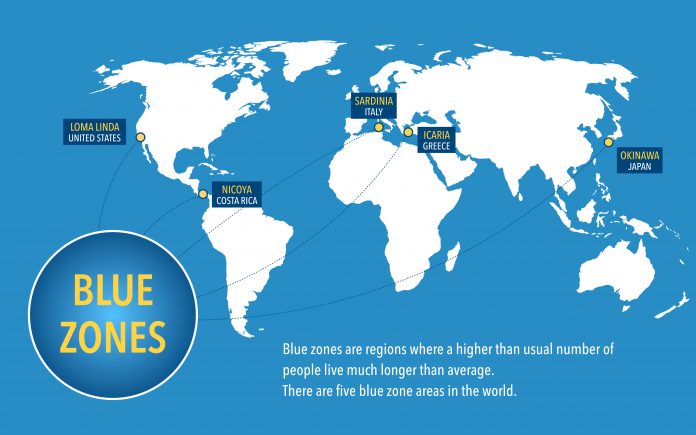 We all know about Monday Blues, Blue Collar, Blue Whales and, Blues Clues,

Have you heard of Blue Zones?

The quest for the mystical ‘Fountain of Youth’ is still on, but the townsfolk of five zones in the world are pretty close. These five ‘Blue Zones’ have found the magical formula to live longer lives compared to the rest of the world.

Chronic diseases take over after a certain age, with your genes and the environment that contribute hugely to determining your lifespan and susceptibility to disease. However, the age old debate of nature versus nurture might have just been answered- your lifestyle does indeed have a greater impact on you.

‘Blue Zones’ are geographic areas where people have low rates of chronic disease and live longer than anywhere else in the world. These zones are home to some of the oldest living humans.

The term Blue Zones was coined by an author, Dan Buettner, who was studying areas of the world in which people live exceptionally long lives. These places were named ‘Blue Zones’ by Buettner and his colleagues, as blue circles were drawn around these places on their map, during their escapades.

Although there are only five places discussed in Buettner’s book, there may be unidentified areas in the world that could also be classified as Blue Zones.

The five Blue Zones in the world —

There are nine evidence-based common denominators between the Blue Zones that are believed to slow aging:

Exercise is built into the daily lives of the world’s centeratians. They do not pump iron supplements, run marathons or spend hours at the gym. Instead, it is built into their daily lives through gardening, walking long distances, cooking and doing daily chores. Their environment constantly makes them stay physically active without them even knowing it. The majority of residents stay physically active well into their ninties. Physical activity is associated with increased psychological health and quality of life, as well as protection against chronic illnesses. Exercising all your muscle groups on a daily basis is important for good health and longevity.

The Okinawans call it ‘Ikigai’ and the Nicoyans call it ‘plan de vida’. It gives them a sense of purpose and a reason to wake up in the morning. They are comfortable with their existence, they know where they are headed and what their goals are. Knowing your sense of purpose can add up to 7 years to your life expectancy. Having a purpose in life lowers the risk of death from any cause.

Everyone experiences stress, even the people in the Blue Zones. The difference being, people in Blue Zones take time out of their day to relieve stress. They spend time outside in the sun, pray or meditate daily and spend time with family and friends. What the world’s longest-lived people have that others do not are routines to do way with their stress.

‘Hara hachi bu’ as the Okinawanians call it, is a mantra said before meals that reminds them to stop eating when their stomachs are 80% full.

The 20% gap between not being hungry and feeling full is the difference between losing weight or gaining weight.

People in the Blue Zones eat their smallest meal in the late afternoon or early evening and then do not eat for the rest of the day. They eat their food slowly to enjoy their food and reduce hunger, with no overeating at all.

In addition to being consistent with their calorie intake, the Blue Zonians fast periodically for their health.

People who live in Blue Zones eat a diet of whole plant foods. Their diets are 95% plant-based, with beans, soy and lentils. They aren’t strict vegetarians but tend to avoid meat. Diets in the Blue Zones are typically rich vegetables, legumes, whole grains, fish and nuts.

People in all Blue Zones (except the Adventists) drink alcohol moderately and regularly. Moderate drinkers tend to outlive nondrinkers. They drink 1 to 2 glasses per day with their friends and with food.

They don’t save up their glasses of wine all week and binge drink on the weekend. Everything they do is consistent and in moderation.

A sense of belonging and faith is a huge grounding factor in these Blue zones. A faith-based community where denomination does not matter gives you a feeling of reassurance and protection. Being religious lowers your risk of death because of the social support and strong emotions associated with it.

Successful centenarians in the Blue Zones put their families first. The old and young all live together. Aging parents and grandparents are nearby or in the same home instead of being shipped off to senior centers or homes. Interacting with people of different generations lowers diseases and mortality rates of the older people as well as children at home. Multiple generations of family live together with a deep sense of understanding, love and tight bonds.

The right tribe is essential. The people you surround yourself with affect you more than you know. The Blue Zonians choose or are even born into social circles that support healthy behaviors. Bad habits like smoking, obesity and loneliness as well as good habits like happiness are contagious. So surround yourself by people who bring out the best in you. Blue Zone populations often live in tight-knit communities where they interact with each other regularly.

What The Blue Zoneians have in common dispite different lifestyles is their modus operandi. By incorporating a few of these factors into your lifestyle, you can make a world of a difference to your overall health and even add a few healthy years.