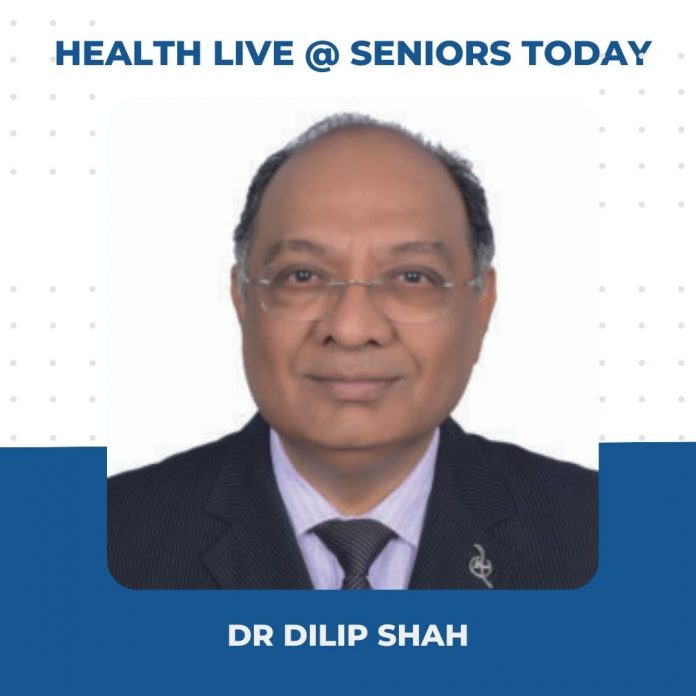 Dr Dilip Shah is a leading Orthopaedic Surgeon based in Mumbai. With over four decades of experience, Dr Shah completed his MBBS from the KEM Hospital and Seth GS Medical College in 1978 and MS – Orthopaedics from KEM & GSMC in 1980. He has done his D Ortho from Mumbai at the College of Physicians and Surgeons. He is a member of the World Orthopaedic Surgeon’s Association (SICOT) and the Bombay Orthopaedic Society. Dr Shah is a recipient of the highest fellowship of SICOT, Italy, in 1985 and an also an an awardee of AO International Fellowship, German, in 1995. He received the national fellowship (BOS) in 1989. In this Health Live @ Seniors Today session,  he spoke about and answered questions about total hip replacement.

Some of the cases/ conditions where you may require total hip replacement include:

Paget’s disease where the hip gets eroded.

Fracture of the femur

Hemophilias can also lead to requirement of hip replacement

Dr Shah says that he does not recommend total hip replacement unless the patient wants it. If it is done in cases where it is not indicated, it is unethical.

These exercises are important because if you fail to do them, there is something that is called the embolic phenomenon in which a clot that is formed elsewhere in the body travels to another site such as the heart or the brain via the bloodstream,  which can be taxing to your life as well.

Exercise prescription after the operation, in the later stages includes:

Standing behind a chair

Some complications of the surgery include:

Air bubble or fat embolism that can travel to your lung

Subluxation fractures of the acetabulum

– A few takehome message from Dr Shah for prevention are:

Hip replacement includes replacing 2 components- the cup and the saucer. In no way should that be confused with the replacement of pelvis, which is done in only extreme cases and tumours.

If you have pain in the hip that radiates to the thigh, the follow up question should be, does it go to the front of your thigh or the back?

If it is radiating to the front of the thigh and is aggravated on moving the hip, the most probably cause is hip arthritis.

If it is radiating to the back of the thigh and goes down to your knee, ankle, foot, it is sciatica pain which can be caused due to a mild slip disc.

So this required thorough clinical examination to determine whether your problem is one due to the hip or the nerve.

For this you can also get radio imaging X-ray, both hip, lateral view and lumbosacral spine X-ray- AP and lateral view.

AVN (avascular necrosis) has been staged into stages 1 through 4. Stages 1 and 2 can be treated with complete bed rest and medical intervention but once it progresses to stages 3 and 4, it inevitably requires total hip replacement because the pain can be unbearable.

You can get a bilateral hip replacement surgery, but it also depends on the patient, the anaesthetist, the insurance company and coverage.

A well-done, uncemented hip replacement can last 20-25 years. But after 25 years the components start becoming loose.

Don’t let your teeth get vintage!

How to regain stronger knees

Why a healthy urinary system matters