No Country for the Poor 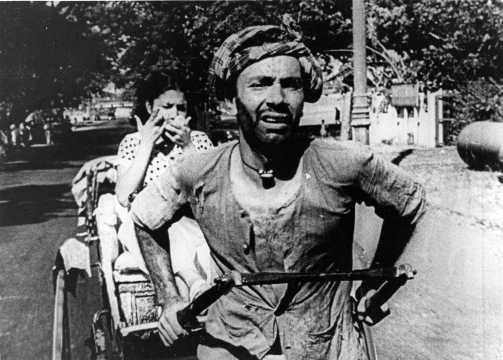 The pathetic condition of the poor and marginalised in India, brought into the limelight by the Covid-19 crisis, was documented in stark realism by Bimal Roy, well over 60 years ago, writes Deepa Gahlot

The tragedy of migrant workers has been highlighted during the Covid-19 crisis—those people from rural areas who are forced to go to the cities to earn a living because there are no employment opportunities in villages. They live in the city in squalid conditions, several packed in a room, and send money home, doing menial low-paid jobs. However, as their troubles during the pandemic showed, nobody cares for them and they belong nowhere.

In 1953, inspired by the Vittorio De Sica classic Bicycle Thieves (1948), Bimal Roy made Do Bigha Zamin, which is considered one of the first neo realistic films in India. The title came from a Tagore poem, the idea from a Salil Chowdhury story. (In return for parting with the rights, he wanted to compose music for the film).

The film opens on a note of hope when a famine-hit village finally gets rains. Shambhu Mahato’s (Balraj Sahni) joy is cut short when he learns that the zamindar, Thakur Harnam Singh (Murad) wants to sell his land for the construction of a factory, and only Shambhu’s meagre two bighas (less than an acre) stands in the way. When the poor farmer refuses to sell, Harnam Singh brings out his old debts, which by some fudging by the accountant, have bloated from Rs 65 to Rs 235, which he is unable to repay. He loses the case in court and is ordered to settle the loan within three months, or forfeit the land.

For want of a better option, Shambu leaves his pregnant wife Parvati (Nirupa Roy) and elderly father (Nana Palshikar) in the village and goes to Calcutta (now Kolkata) to earn some money. His son Kanhaiya (Rattan Kumar) sneaks into the train to be with his father.

In the city, they are just another set of clueless, unwelcome strangers and lose even their few belongings to a thief. After much difficulty, they find a room in a slum, and with the support of an old rickshaw puller (Nazir Hussain), Shambhu starts towing a rickshaw too, and Kanhaiya works as a shoeshine boy, with some help from Lalu Ustad (a very young Jagdeep).

The task of saving money seems impossible—Shambhu works relentlessly, but it is never enough. Then, in the film’s most heart-rending scene, a man drives Shambhu to run faster to catch up with his teasing girlfriend, and the rickshaw meets with an accident.

In desperation, Kanhaiya joins a pickpocket, but even in the state of such extreme poverty, Shambhu cannot tolerate his son turning into a thief and gives him a thrashing.

In the village, Parvati works on a construction site, and is in dire straits. She gets worried about her husband and son, and goes to the city to look for them. In trying to escape a man trying to molest her, she is hit by a car.

The money that Shambhu had saved up is spent on Parvati’s treatment, and a contrite Kanhaiya tears up the money he has stolen, believing that his sin was the cause of his mother’s suffering.

When the three return to the village, the land has been auctioned and they are faced with a gate barring them; Shambhu is unable to even pick up a handful of soil from his lost land. The film ends with them walking away dejectedly, their future bleak.

Even though Bimal Roy piles on every misfortune onto the Mahato family, the plight of the rural poor could not have been portrayed with more sensitivity by the director and screenplay writer, Hrishikesh Mukherjee. Kamal Bose shot it brilliantly on actual locations. It was Balraj Sahni’s empathetic performance that gave Do Bigha Zamin such power—he actually pulled rickshaws on the streets on Kolkata to understand the physical rigour the character had to undego, and must have starved to that that gaunt appearance.

The film won awards in India and abroad, and is considered a masterpiece, getting the acclaim it deserved.

The real tragedy is that so many years after the film was made, the condition of the country’s poor is not much better. They still fall into insurmountable debt traps, farmers commit suicide, young men and some women migrate to the cities, where they are swallowed up by a different kind of apathy.

Celebrating the 1970s Cinema in Bollywood

Have you got post-Covid syndrome?