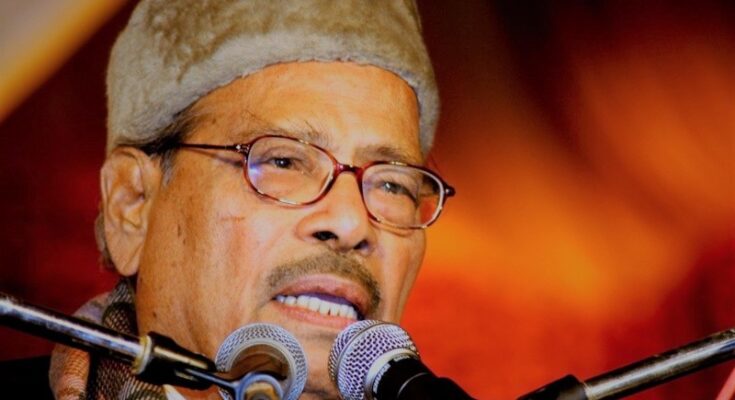 Manna Dey was one person who could sing anything. Though he was often praised for his rendition of classical-based compositions, he was great at comic songs, sad songs, love songs, the works.

October 24 marks the legendary singer’s seventh death anniversary. We choose some uptempo Manna Dey songs which are a mix of classical, comic and situation-based styles. Most of these songs have an element of showmanship. The order is chronological.

Though it was actually a classical composition based on raag Adana, the song was remembered for its comic situation picturised on David. Shankar-Jaikishen’s music explored the nuances deeply, using back-up effectively, whereas Shailendra’s lyrics brough out the rain effect. Manna Dey at his best.

A masterpiece in choreography, this iconic song was filmed on Nadira and Raj Kapoor. After Asha Bhosle sang the first half, Dey came in. Shankar-Jaikishen used the chorus wonderfully and the song had a smooth build-up with exquisite trumpet parts. Shailendra’s lyrics took a philosophical look at life’s journey.

The song was recognised for Dey’s intricate rendition of the raag Bhairavi-based composition. Picturised on Raj Kapoor and classical dancer Padmini Priyadarshini, it is a popular number at many TV reality shows. Roshan provided the music and Sahir Ludhianvi wrote the lyrics, which blended metaphors with comic lines.

This memorable number was filmed on Balraj Sahni and Achala Sachdev. It was based on a composition by Afghan musician Abdul Ghafoor Breshna, and arranged by Ravi, with Ludhianvi writing lines like “Tujhpe qurbaan meri jaan, meri jaan”. It’s always been a favourite for old couples.

Sung in a Bhojpuri dialect, the song was a huge hit. Shankar-Jaikishen provided the music with Shailendra writing the lines. Set in a street theatre style village group atmosphere, the song was filmed on Krishan Dhawan with Raj Kapoor and Waheeda Rahman appearing on screen too.

A rock n’ roll song which R.D. Burman adapted from Chubby Checker’s ‘Let’s Twist Again’, this one had Mehmood doing a jig, with members of the band dancing along and Tanuja watching. Dey’s singing went with the song’s energetic theme. Lyrics were by Hasrat Jaipuri.

The ultimate comic song written as a singing duel between Sunil Dutt, backed by Kishore Kumar, and Mehmood, with Saira Banu being the object of their attention. Another R.D. Burman classic, it was sung by Kishore and Dey. Rajendra Krishan did a phenomenal job writing the hilarious lines.

One of Dey’s masterpieces, it was picturised on Raj Kapoor in a circus. Music was by Shankar-Jaikishen, while Neeraj wrote philosophical lines on the joys and sorrows of life. A part of the song was inspired by William Shakespeare’s concept of the world being a stage, replacing stage with circus. The sets were larger than life.

Influenced by Afghan music and making elaborate use of the rabab, this was one of the best friendship songs. Dey did playback for Pran, who played a Pathan, and Amitabh Bachchan was also on screen. Kalyanji-Anandji composed the music and Gulshan Bawra wrote, “Yaari hai imaan mera yaar meri zindagi”.

Dey sang only the opening part of the song, but his voice went perfectly with Premnath’s character. Shailendra Singh joined him on the song, which segued into ‘Jhooth Bole Kauva Kaate’ featuring Lata Mangeshkar. Rishi Kapoor and Dimple Kapadia were also cast in the scene, which featured a Goan group dance. Music was by Laxmikant-Pyarelal and lyrics were by Anand Bakshi.