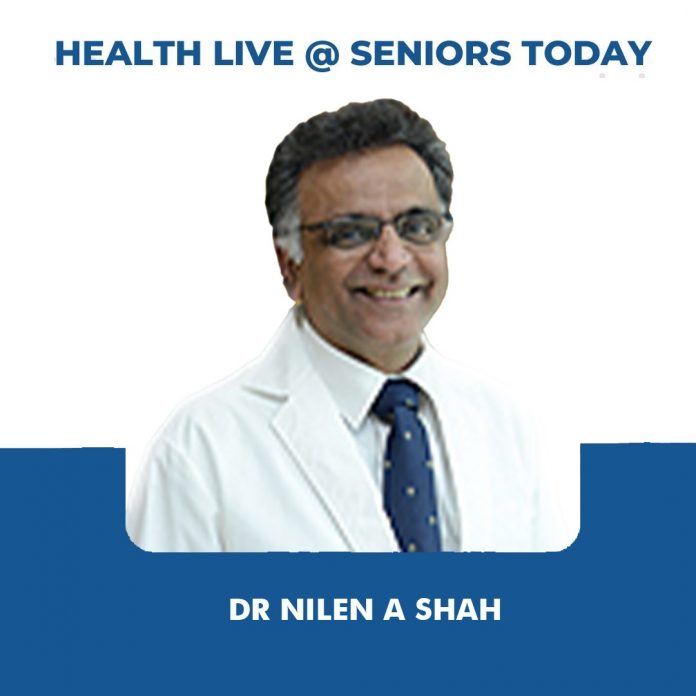 On 15 Oct, 202, Seniors Today hosted their weekly Health Live Webinar with Dr Nilen A Shah, a leading Orthopaedic Surgeon, who spoke on Knee Replacement myths and how new technologies have helped in improving quality of life for seniors.

About Dr Nilen A Shah

Dr Nilen A Shah is a Consultant in the Orthopaedics department at Sir H. N. Reliance Foundation Hospital and Research Centre. After completing his MBBS from Topiwala National Medical College (Mumbai) with Honours, he secured D Ortho with 2nd rank. He also earned MS Ortho (Mumbai) with a gold medal and MCh Orth (UK).

Dr Shah is a Consultant Orthopaedic and Knee Replacement surgeon attached to various hospitals in Mumbai. He is involved in performing approximately 1000 knee replacements a year in Mumbai, along with a group of four Fellow surgeons. He worked as a Clinical and Research Knee Fellow at Bristol, England for a period of 18 months, and this helped him gain hands-on experience in all aspects of Knee Surgery. He also worked as Orthopaedic registrar in various hospitals across the UK on the ODTS rotation.

He has pioneered the subverts approach in knee replacement surgeries that is only minimally invasive. Dr Shah has garnered critical acclaim for this approach and often performs live surgeries in various conferences across India. He is a reviewer of the Indian Journal of Orthopaedics and the British Journal of Bone and Joint Surgery. Dr Nilen A Shah was also involved in clinical research and reviewed multiple research projects during his appointment in the UK.

Dr Shah presented a series of 300 knees operated through the minisubvastus technique at WIROC 2007, and conducted a seminar on Knee Arthroplasty at WIROC 2008. He has held faculty positions in several national and international conferences, including an AIIMS update on Arthroplasty in 2014.

As the longevity of human life is increasing, the degenerative diseases are also on a rise.

Knee replacement is a surgery primarily required in patients with arthritis.

Now the question arises, what is arthritis? Arthritis is an affection of the joint where mainly the cartilage, which is a soft structure covering the bone, gets eroded. It is a degerative condition which increases with age.

It is important to know that the cartilage is not usually seen on X-ray films.

For people above the age of 55, the incidence of arthritis is 11% for men and 15% for women

It increases 2% per year

If you are obese ie your BMI is higher or you have had injuries in the past, then the incidence of arthritis is higher.

Arthritis seems to be more common in women than men.

There are both surgical and non surgical management.

Paracetamol can be a drug of good choice

The greatest evidence for whether injections work, are present for steroid injections.

Arthroscopy has a very limited role.

In a older person with established arthritis where some kind of replacement, whether partial or total, will be required.

In osteotomy, the bent bones are realigned so as to make the weight distribution symmetrical. It works well in younger patients.

With total knee replacement surgery, the aim is to

Despite the great success of the surgical procedure, it does have some drawbacks:

But as the technology has advanced, some of these drawbacks have been cut down and it is now up to not only the patient but also the doctor. Dr Shah says he prefers performing the surgery only on patients with an indication for surgery such as neurological deficit, spinal problems, excess pain, patients with poor blood flow to the limbs.

Mobilisation is encouraged typically on the 2nd-3rd day, post operatively.